A Light at the End of the Tunnel For the Galapagos Islands?

After two years of tireless environmental advocacy over an urgent local judicial change, we now may be witnessing history in the making. 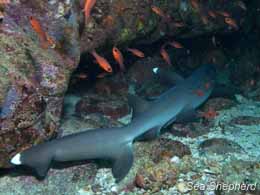 Shark resting in a reef in Galapagos National Park. Photo: Tim WattersJust recently, the national judicial authority of Ecuador announced its decision to put in place a provincial court in the Galapagos. This means that environmental prosecutions will no longer have to take place a thousand kilometers away from the Galapagos, which is where the nearest courthouse is located. This is the current protocol. This will certainly be a major step towards better access to environmental justice in the Galapagos.

According to the national judicial authority, the new provincial court will soon be established.  As part of a national program on judicial transformation, we hope for the provincial court to be integrated by jurists who deserve such an important position. We hope for the new judges to honor their role of delivering justice in an area that was the world’s first natural heritage site. We hope for real justice to be delivered soon in the Galapagos. And for fair, objective decisions adopted by fair, objective judges. We hope for real judges to be assigned to the Galapagos.

But the good news does not stop there. A few days ago, the national judicial authority also announced its decision to analyze the creation of an environmental judiciary in the Galapagos. Even though it is not yet decided to actually establish such a specialized judiciary, it is –nevertheless- an important step in the right direction, to provide this world natural heritage site with an adequate judicial system-one specialized in environmental issues.

With these decisions Ecuador can, indeed, be making judicial history over marine law enforcement.  That is why Sea Shepherd salutes these important developments. If properly implemented, these initiatives will certainly improve the judicial response against environmental infractions and Galapagos will become one of the first -if not the first- world natural heritage site to have a specialized judicial system.

In the past two years we have seen the local judicial system hit rock bottom over defending environmental issues. We have worked hard to include environmental judicial issues in the public agenda at the local and national level. Do we now see light at the end of the judicial tunnel for the Galapagos Islands? It is about time for change.