A Demonstration Against the “Rot” in Denmark 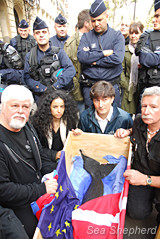 Captain Paul Watson, Lamya Essemlali, Christophe Marie, and Francois Xavier Pelletier with the body of a baby pilot whale and National Police in front of the Danish Embassy
in Paris

The media conference was followed by a large demonstration in front of the Danish Embassy in Paris. Over 200 people attended, as some 40 riot-equipped National Police officers guarded the entrance to the embassy, and effectively shut it down for three hours.

A coffin containing the body of a baby pilot whale that Sea Shepherd brought back from the Faeroe Islands was carried to the sidewalk outside of the Embassy. The body lay upon the European Union flag and was draped with the Danish and Faeroese flags.

Some of the policemen were shocked at seeing the body and many expressed sympathy for the cause.

Media from France and Denmark were in attendance.