On the heels of an announcement by Mexican President Enrique Peña Nieto of the Government’s Strong Commitment to Protecting the Vaquita, Sea Shepherd reports it has been documenting the plight of these endangered porpoises in the Marine Reserve in the Sea of Cortez.

Sea Shepherd Conservation Society announces it has had a crew present in the Sea of Cortez for more than a month on Operation Milagro, a campaign dedicated to the protection of the critically endangered vaquita porpoise. With only an estimated 97 vaquitas remaining, this campaign addresses the urgent need to protect these vulnerable marine mammals from extinction. This news comes on the heels of yesterday’s announcement by Mexican President Enrique Peña Nieto, detailing the government’s firm commitment to conserving the vaquita – an announcement that has inspired hope for this imperiled species. Mexico is enacting a two-year moratorium on gillnet fishing in the vaquita’s habitat that takes effect later this month and taking other critical steps to protect the endangered cetacean.

Since the launch of Operation Milagro in March of this year, crewmembers aboard Sea Shepherd USA’s research sailing vessel, the R/V Martin Sheen, captained by veteran crewmember Oona Layolle, have maintained a presence within the marine refuge of the vaquita in the Gulf of California’s Reserve de la Biosphera, monitoring and documenting the issues facing this species. The Sea Shepherd crew has been surprised to see the extent of illegal fishing and deadly presence of gillnets within these protected waters. 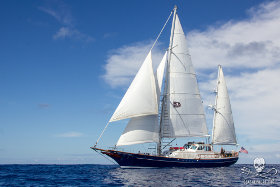 The R/V Martin Sheen under sail in the Sea of Cortez while documenting the vaquitas and their habitat.
Photo: Sea Shepherd / Carolina A CastroThe vaquita, the smallest cetacean in the world, is native to this region and is known only to occur here. According to reports from CIRVA (Comité Internacional para la Recuperación de la Vaquita), a committee that includes government agencies, marine biologists and NGOs, the vaquita population is declining by a shocking 18.5 percent each year – and if measures are not taken to halt this downward spiral, it is believed that the species could be extinct by the year 2018. Of the estimated 97 remaining vaquitas, only about 25 of the petite porpoises are believed to be females of reproductive age. In addition, since the vaquita has a slow reproductive rate, giving birth to just one calf every two years, these animals are being wiped out faster than they can possibly reproduce.

Sea Shepherd commends the Mexican government for the vital actions it is taking to prevent the extinction of the vaquita. Along with the two-year moratorium on gillnet fishing in the vaquita’s habitat in the northern Gulf of California, the government has offered the use of speedboats to the Navy to patrol the reserve. During yesterday’s press conference in San Felipe, President Nieto officially presented to the Navy the keys to the vessels that will now be dedicated to protecting the vaquita by patrolling for poachers and helping to enforce the gillnet ban. In addition, Mexico is spending more than $30 million USD on efforts, including a net “buy-out” compensation program for fishermen who agree to stop using gillnets. The government will also strongly encourage the use of other, less destructive fishing methods that will not harm the dwindling vaquita population.

The vaquitas often become by-catch in gillnets set by both legal and illegal fisheries. The biggest threat to the vaquitas’ survival is likely now the gillnets of illegal poaching operations seeking the totoaba fish – a critically endangered marine species itself. The totoaba is a prized and lucrative catch for poachers who cash in on the high price tag of the fish’s swim bladder, which is exported from Mexico, often being sent through the United States, and sold on the illegal black market in China, where it is served in soup. CIRVA reports that fishermen can receive as much as $8,500 USD for just one kilogram of swim bladder. The fish are caught, their bladders are removed and the rest of each critically endangered totoaba – which can reach two meters in length – is simply left to rot.

Two vaquitas. The vaquita is a critically endangered porpoise species endemic to the northern part of the Gulf of California. It is considered the smallest and most endangered cetacean in the world.
Photo courtesy Wiki Media CommonsGillnets are set on the bottom of the sea, leaving a deadly trap not only for fish but for the vaquita as well. The porpoises become trapped in the nets, and unable to reach the surface for air, they drown.

Mexico is leading the way in the movement to save the last vaquitas on Earth. Sea Shepherd hopes that the U.S. and Chinese governments will follow suit and take decisive steps together to end the illegal totoaba trade that is threatening both endangered species.

Sea Shepherd hopes to work with Mexico in its ongoing efforts in this region to protect the diminishing vaquita population and its habitat. Throughout our history, Sea Shepherd has had great success working with governments and officials to protect ocean wildlife and oppose poaching operations. Since 2000, Sea Shepherd has maintained a positive presence in the Galapagos Islands, working in cooperation with the Ecuadorian government and the Galapagos National Park Service to protect this UNESCO World Heritage Site from illegal shark finning and the trafficking of wildlife. Among other efforts, Sea Shepherd has provided an AIS tracking system to monitor vessels operating within the Galapagos Marine Reserve, and worked with Ecuadorian police to form an elite K9 unit dedicated to detecting contraband wildlife – the first unit of its kind in South America.

Along with efforts to document the plight of the vaquita in the marine reserve, Sea Shepherd has been active in outreach in the region to discuss efforts to protect these elusive and endangered cetaceans. Captain Layolle and members of her crew have met with marine biologists, vaquita experts and other NGOs in Mexico dedicated to this important work in a cooperative effort to assist this species on the brink of extinction. The Mexican government has shown itself to be serious about protecting its marine wildlife. Sea Shepherd stands ready to assist in defense of the world’s remaining vaquitas, before it is too late.

“We have called this campaign ‘Operation Milagro’ because, taking into account the staggeringly small number of vaquitas left, sadly it would be nothing short of a miracle to see one swimming in the sea today,” said Captain Oona Layolle. “President Peña Nieto said yesterday that Mexico is home to 10% of the world’s bio-diversity and he has shown that the government is willing to protect that remarkable eco-system and this vulnerable marine species that calls Mexico’s waters its only home on Earth. Sea Shepherd believes the miracle of the vaquita’s survival is not only possible, we will do everything we can to help.” 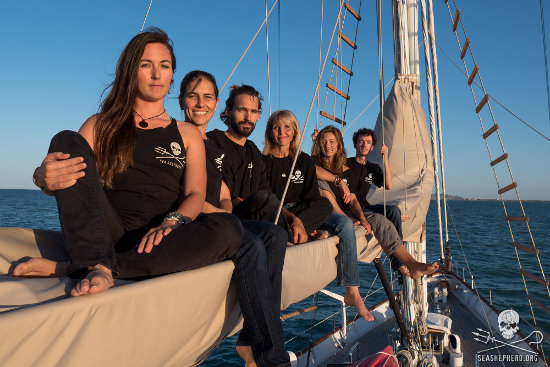 The crew of the R/V Martin Sheen on a mission to save the remaining vaquitas in the Sea of Cortez.
Photo: Sea Shepherd / Carolina A Castro