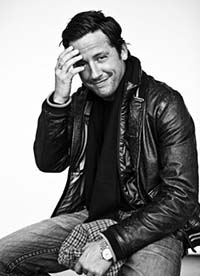 It is the second consecutive year that McCall will stand alongside Sea Shepherd’s multi-national crews in protection of pilot whales and other small cetaceans targeted in the infamous Faroese drive hunt, known as the ‘grindadráp’ or simply, the ‘grind.’

A dedicated Glasgow Celtic F.C. fan, McCall will use his profile and his passion for football to engage in outreach programs with Faroese youth and the wider community during his time in the islands.

"It was important for me to return to the Faroe Islands for this year’s campaign. Having spent a short amount of time here last year, I felt I had to re-visit to try and shine a brighter light on the tired tradition of the grindadráp. For such a beautiful landscape, an unfortunate stain has tarnished the Faroese shores. I hope to continue dialogue and find a way to educate myself and others into realizing that 'traditions' can be changed for the good of humanity and of our oceans," said McCall.

Having recently completed a host of indie films including Modern Love, The Beautiful Ones, and In Embryo, McCall arrived in the Faroe Islands yesterday afternoon. He was greeted by members of the Sea Shepherd land team, who themselves had arrived in the archipelago over the weekend.

Operation Sleppid Grindini Land Team Leader, Rosie Kunneke, has extended a warm welcome to McCall. “We are incredibly grateful to Ross for dedicating his time and his talents to exposing the horrors of the grind in the Faroe Islands. We welcome Ross back to the Sea Shepherd crew with open arms and look forward to working closely with him to help bring an end to this bloody slaughter,” she said.

For hundreds of years the people of the Faroe Islands have been herding migrating pilot whales from the sea into shallow water and slaughtering them. The grindadráp wipes-out entire family groups of whales and dolphins at one time.

Operation Sleppid Grindini will be Sea Shepherd’s sixth campaign in the Faroe Islands. Led by the Sea Shepherd ships the Bob Barker, Sam Simon and Brigitte Bardot, and supported by a dedicated land team, the campaign marks the organization’s strongest at-sea presence in the region to date. 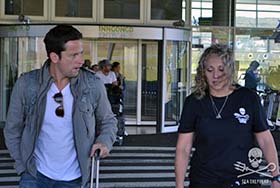 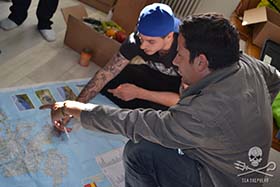