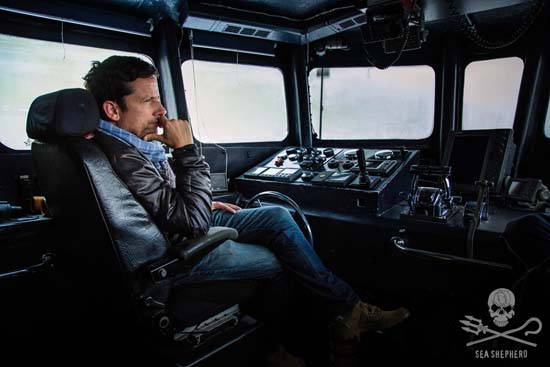 Every year, the Danish Faroe Islands partake in what is known as The Grindadrap. Locals in boats drive pods of pilot whales and dolphins on to their beaches where they are brutally slaughtered with retractable spears.

The Faroese insist the slaughter is a cultural tradition and affectionately refer to it as The Grind. This practice has been going on for hundreds of years on the Faroe Islands, wiping out entire family groups of dolphins and whales at one time. The Grindadrap literally translates to “the murder of whales.”

Sea Shepherd has been working to shut down The Grind in the Faroe Islands since 1983.  McCall – known for such TV work as “White Collar,” “24: Live Another Day” and “Band of Brothers” -  first joined Sea Shepherd on a mission to the Faroes in 2014. He travelled back a year later, cameras in tow. The result is a powerful 22-minute film, “The Grind of the Faroe Islands.”

In an essay published in the Huffington Post this week, McCall wrote about his time in the Faroe Islands and debuted his film on the world-renowned blogging site through an embedded link.

“Rape and pillage was once a tradition. Slavery too,” McCall wrote in his Huffington Post article. “We woke up, saw the light, and don’t do that in civilized society anymore. My fore-fathers would steal sheep, steal sail boats, and I’m sure, commit horrendous crimes that were once accepted in historical society. Things that still live on the memory, but are no longer practiced. My point was, we all change and adapt with the times.” 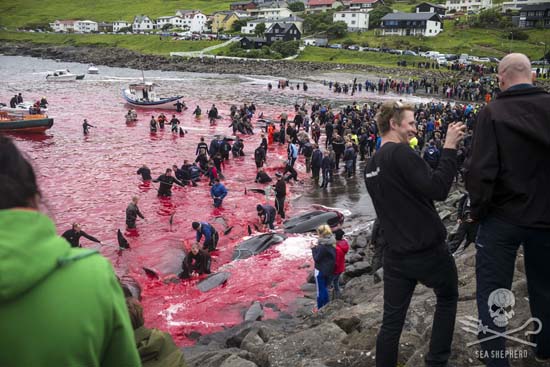 61 pilot whales were slaughtered at the Sandavágur killing beach in the Danish Faroe Isles. Photo: Mayk WendtSince 1983, Sea Shepherd has sent ten campaigns to the Faroes, saving hundreds of whales and dolphins while dealing with the arrest of Sea Shepherd volunteers and the seizure of the organization’s boats.

Faroese law states it is illegal to interrupt the killing and illegal to sight a pod of whales and not report it. To further protect their beloved Grind from outside interference, this year the Faroese enacted laws that prohibit Sea Shepherd crew from entering their waters and wearing Sea Shepherd shirts on land.

With years of footage of this bloodshed, Operation Bloody Fjords will include culling together decades worth of photographic and video evidence to target the Grind in legal, political, commercial and economic arenas.  A full-length documentary feature will also be produced.

“The Grind has no place in the 21st Century,” said Sea Shepherd founder Paul Watson. “Slaughter and cruelty based culture and tradition should no longer be tolerated….The Grind is ecologically destructive and offensively barbaric and Sea Shepherd is relentlessly dedicated to tossing this obscene tradition into the dustbin of history through education, direct action, economic pressure and legal challenges.”