On Sunday night, September 12th, a super-pod of 1428 Atlantic White-Sided Dolphins was driven for many hours and for around 45 km by speed boats and jet-skis into the shallow water at Skálabotnur beach in the Danish Faroe Islands, where every single one of them was killed. 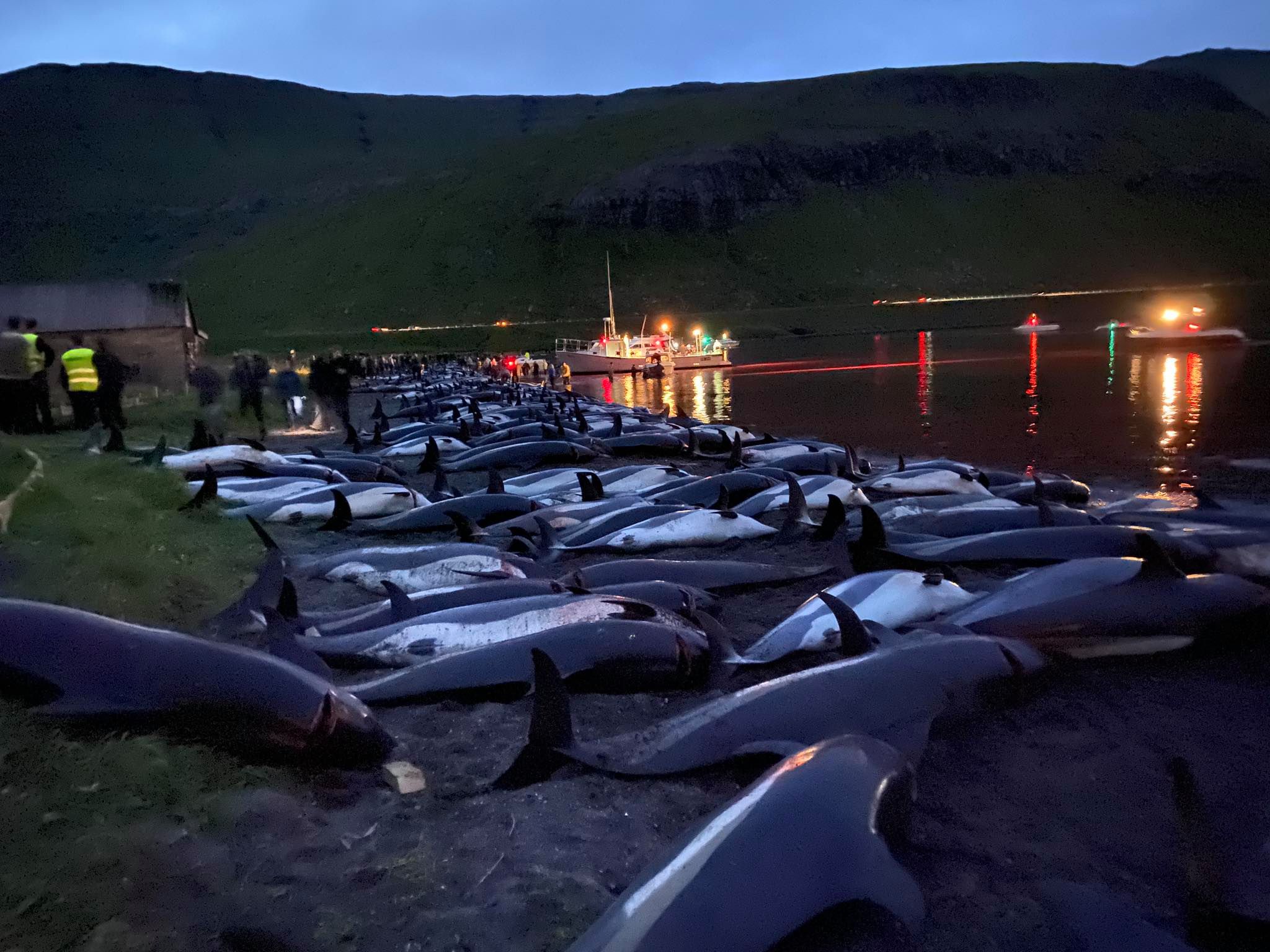 Images of the grind from September 12th at Skálafjörður. Scroll for more. WARNING: GRAPHIC CONTENT

While Sea Shepherd has been fighting to stop the ‘Grind’ since the early 1980’s, this latest dolphin massacre was so brutal and badly mishandled that it is no surprise the hunt is being criticized in the Faroese media and even by many outspoken pro-whalers and politicians in the Faroe Islands.

According to locals who shared videos and photos with Sea Shepherd, this hunt broke several Faroese laws regulating the Grind. First, the Grind foreman for the district was never informed and therefore never authorized the hunt. Instead, it was another district’s foreman who called the Grind without the proper authority.

Second, many participants of the hunt had no license, which is required in the Faroe Islands, since it involves specific training in how to quickly kill the pilot whales and dolphins. However, footage shows many of the dolphins were still alive and moving even after being thrown onshore with the rest of their dead pod.

Third, photos show many of the dolphins had been run over by motorboats, essentially hacked by propellers, which would have resulted in a slow and painful death. According to locals, the hunt has been reported to the Faroese police for these violations. 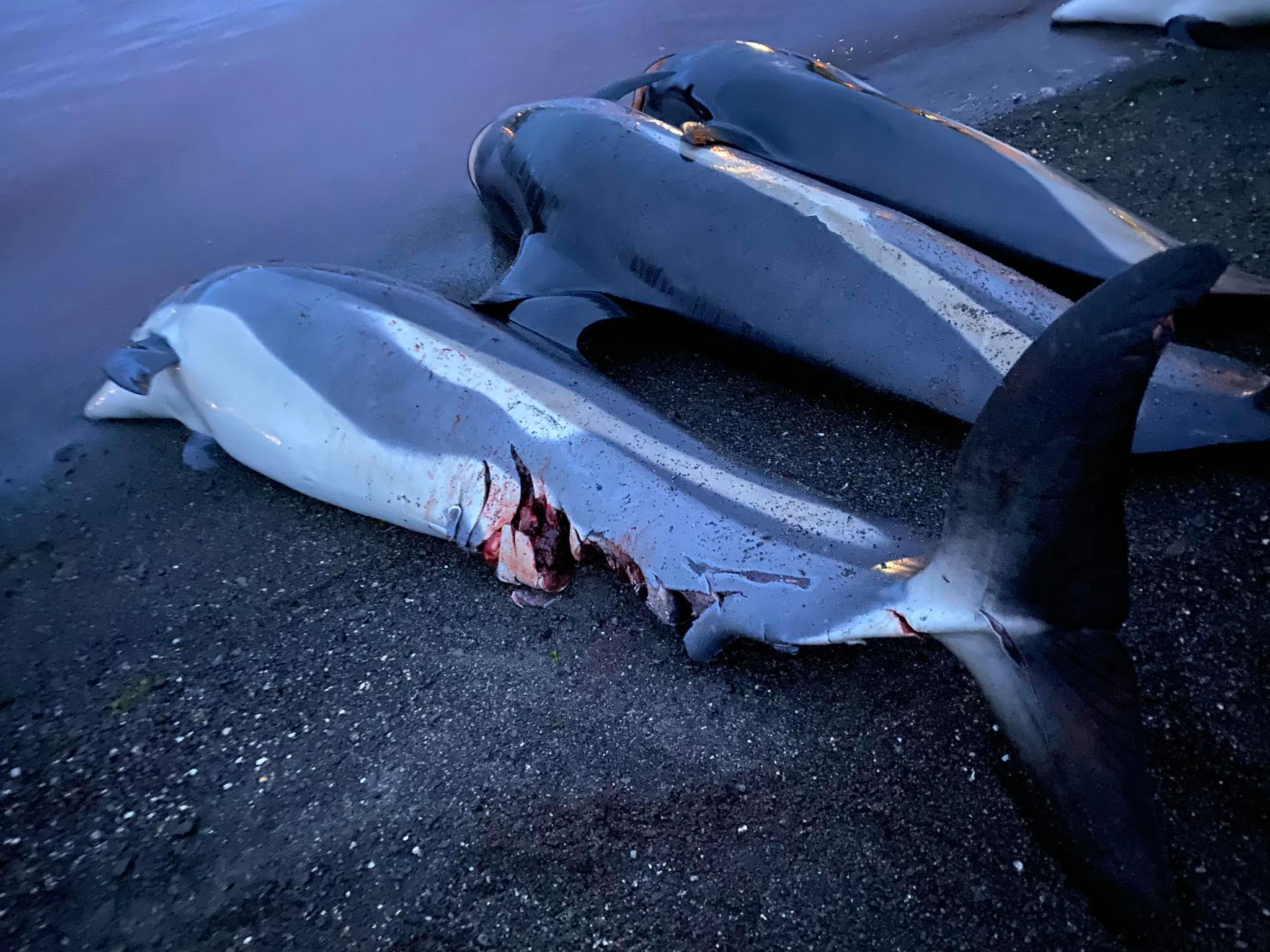 Dolphin injured by boat propeller in the grind on September 12th at Skálafjörður.

Normally meat from a grindadrap is shared amongst the participants and any remainder among the locals in the district where the hunt takes place. However there is more dolphin meat from this hunt than anyone wants to take, so the dolphins are being offered to other districts in the hopes of not having to dump it.

The Danish newspaper Ekstra Bladet published interviews with locals, whose full names are redacted for their families’ safety, explaining how a lot of Faroese are furious with what happened. “My guess is that most of the dolphins will be thrown in the trash or in a hole in the ground,” said one. “We should have quotas per district, and we should not kill dolphins,” said another. One local has asked Danish Prime Minister Mette Frederiksen to investigate the matter, saying “If she expresses her criticism, then it will also be easier for the locals who want this barbaric tradition stopped.” Others express worry that the international press showing the slaughtered dolphins put their exports at risk (the Faroe Islands export salmon to the UK, US, and Russia).

Even the local Faroese press, usually reluctant to publish anything against the hunt, quotes Hans Jacob Hermansen, former chairman of the Grind, saying the killing was unnecessary.

“For such a hunt to take place in 2021 in very wealthy European island community just 230 miles from the UK with no need or use for such a vast quantity of contaminated meat is outrageous” – Rob Read, COO at Sea Shepherd

To get a sense of scale; this single hunt of 1428 Atlantic White Sided Dolphins at Skálabotnur approaches the Japanese government quota for the entire 6-month dolphins killing/capture at the infamous ‘Cove’ at Taiji in Japan, and significantly exceeds the numbers actually killed in any recent years of the Taiji killing season.

This cruel and unnecessary hunt was carried out towards the end of the summer when the Faroese have already killed 615 long finned pilot whales, bringing the total number of cetaceans killed in 2021 in the Faroe Islands to a shocking 2043.

"Considering the times we are in, with a global pandemic and the world coming to a halt, it's absolutely appalling to see an attack on nature of this scale in the Faroe Islands. If we have learned anything from this pandemic is that we have to live in harmony with nature instead of wiping it out." – Captain Alex Cornelissen, Sea Shepherd Global

Each year, Sea Shepherd encounters more and more locals in the Faroe Islands who are opposed to the Grind, but who unable to speak out publicly for fear of reprisals. We will continue to support their efforts to bring an end to the ongoing slaughter of Pilot Whales and other dolphins.