Sea Shepherd Australia offers up $10,000 reward for information, which leads to the prosecution of people illegally killing protected sharks 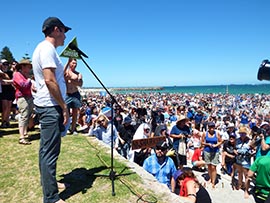 Despite the WA government’s claims that its drum lines would only target sharks above three metres, a two-meter Tiger Shark was pulled up dead off Leighton beach at 6:45am today.

Baited drum lines are not being checked for well over 12 hours at times. This means sharks caught on the lines are left for long periods, unable to swim. Many sharks need to swim constantly to enable them to extract oxygen from the water to breath. Therefore, the sharks that are caught on the drum lines are starved of oxygen and cannot breath. At the same time, the baited shark must endure the pain of having a massive hook punctured through their head. Both methods guarantee the shark endures a slow, painful death.

The threat that Barnett government’s shark cull poses to one of the most unknown and therefore feared animals of our time, the Great White Shark, has inspired Australian’s to stand-up for this ancient and mysterious creature. This weekend, demonstrators angered by Barnett and his cull set an Australian record for the largest protest for any one wild species, with over 6,000 people in Cottesloe, West Australia, rallying for sharks, the health of our oceans and our kids. Thousands of others around Australia and New Zealand also joined the protest as a united voice for sharks, with over 16 rallies taking place across both countries.

Cottesloe is the home electorate of WA Premier, Colin Barnett, who is leading the charge to kill the Great White; a species listed under the International Union for the Conservation of Nature (IUCN) Red List of threatened species, and protected under Australian law.

However, it was an even greater honour and privilege to meet Sharon Burden, the mother of Kyle Burden, the young surfer who died as the result of a shark incident while bodyboarding in Bunker Bay, WA in 2011. It took great courage for Sharon to attend the rally in a show of her opposition to Barnett’s shark cull program. Sharon has also previously called for a legal challenge to the WA government's cull program.

Earlier that day, I had the pleasure of meeting singer songwriter, Sumi, who performed a harrowing and beautiful piece called Shark Song (http://www.youtube.com/watch?v=BDPwEFw-V9U) . Before her performance, Sumi announced to a crowd of over 6,000 people that all proceeds from the iTunes sales of Shark Song would be donated to Sea Shepherd. Thank you Sumi from all of us at Sea Shepherd.

Sea Shepherd Australia would like to once again congratulate Natalie Banks on a superb event, giving people all over Australia an opportunity to be a voice for sharks and future generations, acknowledging the critical role sharks play in maintaining humanities’ life support system; our oceans.

People are now encouraged to write, ring and fax their local MPs to let them know that we want our children to grow up in a world with Great White Sharks, and oceans rich in biodiversity and life. We are against this ridiculous cull of sharks.

Sea Shepherd has raised deep concerns about the fisherman operating the southwest cull program; specifically, his grave error in misidentifying the Tiger Shark he killed as a Bull Shark. The WA government has backed the fisherman’s claims, issuing statements claiming that it was indeed a Bull Shark that was caught and killed, despite contradictory reports from numerous shark experts who have reviewed detailed photographs of the dead shark.

Around the world sharks are in big trouble with over 90% of the worlds’ sharks wiped out through fishing and the cruel shark fin trade, which is responsible for the death of between 70 and 100 million sharks a year. Places where sharks have been wiped out have been drastically impacted by the loss, with effects ranging from the collapse of fisheries to oxygen depleted dead zones.

Given the diminishing state of global shark populations, the WA coastline is rare and unique. Ironically, even the WA Department of Fisheries acknowledge this on its website, which states:

“Despite their sometimes-menacing appearance and reputation, sharks seldom cause harm when interacting with humans. The presence of some shark species as ‘apex predators' – occupying the very top level of the food web – is actually an indication of a healthy marine environment.”

In a bizarre contradiction to this statement, our WA fisheries are now being ordered to destroy our healthy marine environment.

A report released in 2012 by the Bond University for the WA Department of Fisheries stated that, due to the environmental impacts of shark control activities, it is not recommended that either shark nets or drum-lines be introduced into WA. Baited drum-lines and shark nets do not guarantee that beaches are free of sharks of a size or species that pose a risk to humans.

During the first 15 years of the shark control program in Queensland, over 14,000 marine animals other than sharks were caught in the nets and drum lines. Between 1975 and 2001, almost 12,000 Great White Sharks, Tiger Sharks and Bull Sharks were killed and 53,000 other marine animals were killed. Reports indicate that there could be as few as 3,500 Great White Sharks left. The Barnett government is engaged in the targeted killing of a protected species, and as we know extinction is forever.

The Federal Liberal government is exempting its WA state counterpart from Federal Environmental laws, intended to fulfill Australia’s international obligations to protect biodiversity, endangered species and migratory wildlife, in order to kill protected species of sharks off our coast. Great Whites have received a higher protection status than our magnificent Humpback Whales. The WA and Federal governments may be giving people out there the false impression that they have been empowered by the government with a license to kill protected Great Whites and Tiger Sharks of any size. This is not the case. They do not have an exemption to kill; these animals are still a protected species. As such, Sea Shepherd is offering $10,000 to anyone who provides information that leads to the conviction of people killing these protected sharks. We want to send a very clear message to the public about this.

Sea Shepherd has received many emails and letters from concerned mums, dads and kids all over the globe, even from the Galapagos Islands where Sea Shepherd works closely with local authorities, in a bid to protect sharks from illegal poaching. Kids on the other side of the world know that what happens in our oceans across the planet affects us all. We are all connected.

Considering the current state of the worlds’ oceans and the damage that is being inflicted on them, and therefore on our children's future, if we want to see the most dangerous, terrifying animal to the sea, we need only look in the mirror.

What do you see when you look at those drum lines? A couple of red buoys? I see a little more than that. To me, Barnett’s shark cull represents what our government is doing to our Great Barrier Reef, to our Tarkine, to our water supplies through coal seam gas, to our sharks off the WA coast, and therefore to the future our kids. They are stealing our kids’ future away from us and from them; for any crime against nature is a direct crime against humanity.

Premier Barnett ordered to the WA Fisheries Department to install the drum lines for the shark cull while he was away in Africa so he did not have to face the music. We were never under the illusion that this campaign was going to be easy. We are up against a very powerful government, economically and politically; they have the influence, they have the power, they have the money, they are an extremely arrogant government.

However, we have no choice but to take on the Barnett Government, no matter how powerful they are and no matter how long this takes. The alternative is to do nothing and doing nothing would mean incredible destruction for our sharks and our worlds’ oceans. In the words of Captain Paul Watson, "if there is one message we are trying to get across here is it that, if we cant save the whales, and the sharks, the turtles, the fish, the Great White's and Tiger Sharks, we are not going to save the oceans. And if the oceans die, we die, we can’t live on this planet with a dead ocean."

An ocean without sharks is a planet without people. No sharks, no oxygen, no civilization. It’s a simple as that. This is really about protecting the future of humanity and I think that’s worth the consequences and sacrifices that have to be made in order to achieve this goal.

The advantage that we have over the Barnett government is our passion for life, and the most important thing worth fighting for on this planet earth is life. My hope is that one day we will all look back on Barnett’s shark cull like Australians now look back on whaling; as a dark moment in our past.

In the words of Ghandi, "First they ignore you, then they ridicule you, then they fight you, then you win." We are here to ensure that the WA government listens to the voice of the people, which is screaming-out for them to protect our sharks.