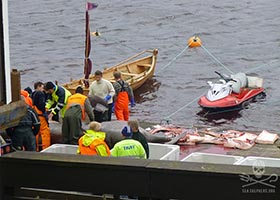 Killers at work butchering the whalesLast night, five bottlenose whales (hyperoodon ampullatus) were stranded on the beach at Hvalba on the Faroese island of Suduroy. They were discovered this morning. Within minutes, bloodthirsty Faroese whalers were scrambling over the bodies like agitated maggots, to either kill them or cut them up.

We have determined through our documentation and inquiries that the whales were alive when discovered.

The whales could have been pulled back into the water and released; instead they were mercilessly killed and then towed to a nearby harbor to complete their butchery.

The evidence is clear that the whales were indeed alive when found, not only from observation but because the spinal cord on the whales was severed prior to them being towed to the harbor. If dead, there would have been no need for this particular cut, which the whalers brag about as being their “humane” way of killing a whale.

With our vessels we would have been in a position to rescue the whales by towing them back out to sea. The killers and the police prevented us from doing so.

Faroese regulations only allow the killing of bottlenose whales that have beached themselves and CANNOT be driven out to sea again. 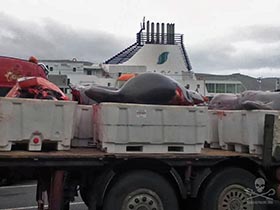 Bottlenose whale heads lined up after butcheringWe will be consulting with an attorney and with the police to investigate if charges can be brought against the killers for violation of the regulations pertaining to the beaching of bottlenose whales. The bet is they will have a veterinarian who will sign off that the whales could not be saved.

Long-term statistics indicate that the most frequent beachings are in the villages of Hvalba and Sandvík on Suðuroy.

The beach is isolated and difficult to monitor and the weather and seas were nasty, but despite the conditions Sea Shepherd offshore volunteers were able to get the fast boat Loki to the harbor within 30 minutes, in time to film the whales being butchered. The killers were strutting about - all smiles along with the cops - the entire lot feeling proud and self-righteous that they had just destroyed five beautiful creatures without a modicum or remorse or regret.

The population of Northern bottlenose whales is thought to not number more than 10,000. 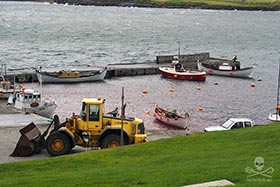 Beautiful blue waters of the Faroes
turned red with the bloodThe Northern bottlenose whale is listed on Appendix II [8] of the Convention on the Conservation of Migratory Species of Wild Animals (CMS) [9]. It is listed on Appendix II [8] as it has an unfavorable conservation status or would benefit significantly from international cooperation organized by tailored agreements.

In addition, the Northern bottlenose whale is covered by the Agreement on the Conservation of Small Cetaceans of the Baltic, North East Atlantic, Irish and North Seas (ASCOBANS) [10], and the Memorandum of Understanding Concerning the Conservation of the Manatee and Small Cetaceans of Western Africa and Macaronesia (Western African Aquatic Mammals MoU).

All great conservation news for the Northern Bottlenose dolphin, except if they are unlucky enough to be stranded on a beach within killing distance of the knife-wielding psychopaths of Suduroy.