Why Are Danes Killing Whales? 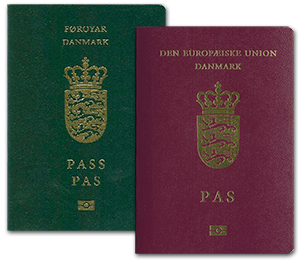 Faroese (green) and Danish (maroon) passportsThe argument presented by Denmark is that the Faroes are independent and they are exempt from European regulations. Therefore although it is illegal to kill whales in the European Union, which includes Denmark, the Faroese may kill whales because they are exempt, despite the fact that they receive tens of millions of Euros in subsidies every year from the European Union.

Faroese citizens are not citizens of the European Union. Or are they?

It appears that some of the killers may not be Faroese at all. In fact they may be Danish. Here’s why.

A Faroese citizen can choose between holding a non-EU Danish-Faroese passport which is green and modeled on the pre-EU Danish passport OR they can choose to hold a maroon regular Danish passport that makes them citizens of the EU and thus they have the full benefits of EU citizenship.

If a resident of the Faroes chooses to hold a maroon Danish passport, they cannot also have the green Faroese passport. This makes them Danish citizens although they can remain Faroese residents. A Faroese resident cannot work in Europe unless they maintain an address in Denmark although this is relatively simple to do.  This means that people who can legally travel freely and work in Europe and who participate in the Grind may be in violation of European Union law. There are also no restrictions for Danish citizens to live and work in the Faroes.

All of these things are controlled by Denmark. So in addition to providing military assets to defend the slaughter of whales, Sea Shepherd volunteers are being arrested by Danish police and brought before a Danish court.

The politicians in Denmark, all 179 Members of Parliament appear to be unanimous in their support for the grind. Danish taxpayers are spending millions of Euros providing police and military support to defend the grind. It may be free meat for the Faroese but it is very expensive meat for the Danes.

It is clear that this is a Danish whale slaughter and the focus must be on Denmark. Denmark has the power to end this horrifically cruel archaic tradition and the first thing the Danish police in the Faroe Islands should be told to do is to check the passports of all the whale killers and any maroon carrying Danish passport holder should be charged for violating the conservation laws of the European Union.