Whalers Return to Japan in Disgrace 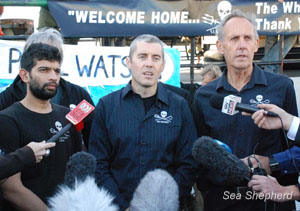 We have only to ask Yoshimasa Hayashi the Japanese Minister for Agriculture, Forestry and Fisheries. The “lowest total of whales taken since “research whaling” began in 1987 he reported.

One hundred and three Minke whales killed and absolutely no Fin or Humpback whales slaughtered. These figures included 50 males and 53 females. From the 53 females, foetus were removed from 46 of the animals.
Only 10% of their kill quota was achieved. Last year it was 26% and the year before that it was 17%. Three very successful years in a row for Sea Shepherd interventions. This is “unforgivable sabotage” according the Hayashi.

Sea Shepherd however is very sure that the whales and the whale loving public are very forgiving of yet another victory over the terrorist whalers of the Southern Ocean Whale Sanctuary.
The Institute for Cetacean Research was even more colourful in their condemnation. According to the ICR Sea Shepherd’s actions were vicious, inhumane, violent acts of sabotage and piracy.
Aside from the fact that no one was injured it is extraordinary that intervening against the cruel harpooning of a whale can be considered “inhumane.”
And as we recall it was the whaling ships that rammed and damaged the Sea Shepherd ships emboldened by their mistaken belief that the United States Courts had authority over Australians in Australian waters.
Sea Shepherd of course expects this over the top illogical propaganda from the ICR. They can call us all the names in the book and it matters not.

What does matter is that there are 932 whales swimming in the Southern Ocean Whale Sanctuary that were not killed.
The whaling operations lasted 48 days of which 21 days were spent running from the Sea Shepherd ships. The remaining days were spent attempting to refuel their vessels and managing to kill whales sporadically. The attempt to kill whales in the 5th “survey” district was completely abandoned due to “relentless interference by Sea Shepherd.”
We kind of like that “relentless” accusation. We like being relentless.

The Japanese whaling fleet is expected to arrive back in Japan this week-end. It will be a humiliating return. They spent between $350,000 and $500,000 dollars for each whale they killed. They probably don’t mind the expense themselves since the money was allocated from the Tsunami Defence Fund and the Japanese taxpayers. The Japanese whaling operation is now a full blown welfare project and the whalers no more than thieves living on the money they stole from people in Japan who lost their homes and their loved ones.

Will they returning December?  Hopefully not but if they do, Sea Shepherd Australia is already preparing the ships for the tenth season of interventions.
What can we say? We agree with the whalers. We are indeed relentless. 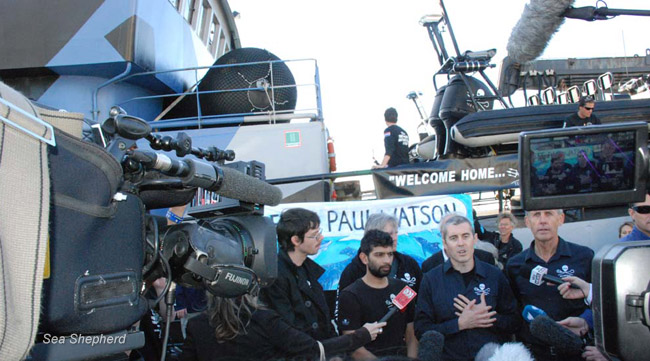