Week Three in The Hague

Second round of oral arguments: Australia and the intervention of New Zealand. 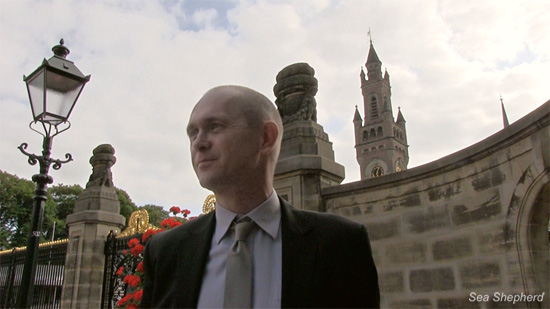 On Monday, New Zealand had all but 90 minutes to intervene in this case. The focus of New Zealand’s intervention was the background in which Article 8 of the 1946 Convention was established as well as Article 8 itself and how it should be interpreted. It is clear that Japan stands alone in its false interpretation of the Article as well as in many other elements that were discussed in round one. This is obviously no surprise as it is Japan that continues to alienate itself from the international community by trying to keep up the charade of whaling in the name of "science." Japan also continues to add insult to injury by pretending the majority of the world’s nations, led by Australia, are guilty of imperialism and the incapability to of understanding international regulations.

In the second day of this week and the first day of Australia’s second round, Attorney-General Mark Dreyfus opened the proceedings by expressing his dismay over the false accusations Japanese counsel had made during their first round. He also strongly objected to the various insults Japanese counsel had put forward. Once again Sea Shepherd was mentioned.  Australia argued that the repeated mentioning of our organization is an attempt to divert the court’s attention and should have no bearing on this case. Sea Shepherd has the utmost confidence that the honorable judges of the ICJ are not interested in Japan’s feeble attempts to establish another platform to create sympathy for their complaints. It is bad enough that the participants at the annual IWC meetings have to listen to their whining.

Further brief presentations in this 90-minute opening day focused on why the court did have jurisdiction and why Japanese whaling is nothing but commercial whaling.

Australia put forth that Japan really didn’t present anything to defend their so-called research contention in the opening round. Instead, they merely put forward an accumulation of arguments that more often than not had no bearing on the actual case and were continuously used as a distraction from the real issue at hand. This is of course to be expected as Japan really has no proper defense. They have been conducting commercial whaling, very poorly disguised as scientific research, for years. In fact their cover up is so obvious that it makes one wonder why bother at all.

The last day of arguments for Australia consisted of careful analyses of the various statements Japan had made the week before, leaving nothing of their arguments intact.

The statement by Japan’s only witness, Professor Walløe, has become a serious problem for Japan. He stated that he never liked the taking of Fin and Humpback whales because it was based on bad science. He therefore singlehandedly offered a partial victory to Australia as it is very unlikely anyone will still consider the taking of these two species of whales under the JARPA II program to be scientific. This could even have far-reaching consequences for the entire case, as Japan has claimed that the killing of whales under JARPA II is part of a larger scientific program and all elements of that program are needed for its success. This is of course nonsense, as JARPA II (as well as JARPA) consist of nothing but a front for commercial whaling activity.  But Japan’s false claim has now also become their problem. Since their own scientist has declared that a large part of the program (Fins and Humpbacks) has no scientific ground, how can the rest of the program (Minkes) be of any value without the missing data? Any other research program would need to be stopped due to such lack of information. How ironic is it that the man who was supposed to convince the court of Japan’s scientific intention, might turn out to be the man who has provided the most important evidence to finally stop Japanese whaling in the Southern Ocean.

In his closing speech for Australia, Attorney-General Mark Dreyfus expressed his hope for this case to be resolved in favor of Australia as this would solve an issue that has been the subject of debate and frustration for many decades. Of course Sea Shepherd agrees. We hope not to have to return again to the Southern Ocean and would welcome the end of our Southern Oceans campaigns. There are many other illegal fishing activities being conducted worldwide that we want to devote our time and resources to and the annual Antarctica budget would get us quite a long way.

Next week will begin the second round of oral arguments from Japan. I am very much looking forward to whatever possible defense they might put forward but I already predict that Sea Shepherd will be mentioned on several occasions. I consider it a testament to our effectiveness at hindering Japan's whale-poaching operations that we have been mentioned so frequently during the course of this landmark World Court case.