We Stand for the Dolphins, First, Foremost and Forever. 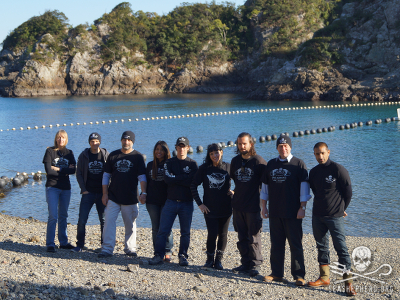 The Cove Guardians will not be leaving Taiji until the killing is ended.
Photo: Sea ShepherdThis is the planet Earth although I view it as the planet Ocean.

When you look at it from outer-space you do not see the artificial boundaries. You see one planet.

All things are connected and when a species is diminished, we are all diminished.

There has been discussion that “foreign” pressure is counter productive in Taiji with regard to the dolphin slaughter. There is an opinion that this is a Japanese problem and it requires a Japanese solution.

I disagree. The dolphins are not the property of the Japanese.

Should only the Canadians oppose the slaughter of harp seals?

The Canadian government has railed against foreign protest against the seal slaughter for the last two decades. Yet for the two decades before that, the opposition to sealing was exclusively Canadian. Brian Davis began it in the Sixties, Peter Lust joined in the early Seventies, myself in the mid-Seventies. From 1964 until 1977, the Canadian government ignored Canadian protest. Then in 1977, I brought Brigitte Bardot to the ice floes and the movement took off.

The Prime Minister of Canada Pierre Trudeau was incensed at this foreign intervention but whereas he never responded to us before, he responded to her. Suddenly the seal slaughter was international and Canada began to feel the heat.

If not for the international media and protest nothing would have been achieved. Canada received more protest mail against the seal slaughter than there were people living in Canada and as a Canadian I welcome every foreign letter, protest and intervention.

And finally, it was the European Parliament responding to European pressure that resulted in the ban on seal products into Europe, a move that has virtually destroyed commercial sealing operations in Canada.

There has not been a single piece of conservation legislation dealing with fisheries, whales or dolphins passed in Japan without foreign pressure. We fought Japan on drift netting and it was an international ban on drift netting that forced Japan to comply. We have fought Japan on whaling and whereas recently, the average Japanese citizen knew nothing about whaling in the Southern Ocean, it can be argued that practically everyone in Japan is aware of it now. Controversy gets publicity, and publicity creates awareness and awareness motivates political pressure, foreign and domestic.

Would those who wish to end the dolphin slaughter rather that we go home and mind our own business?

I happen to believe defending dolphins from ruthless Japanese fishermen, or from anyone else wanting to kill them, is our business. It's everyone's business.

Let’s go back to 1970, American Dexter Cate was on a hillside overlooking Iki Island near the village of Katsumoto.

Below, in a shallow harbor, local fishermen had strung nets trapping hundreds of dolphins, soon to be ground into fertilizer and hog feed. "Those fishermen were there merely to do a job," says Cate. "They didn't consider it murder, but I did. I knew I had to do something."

So on a stormy night in February, Cate paddled into the bay in an inflatable kayak. "I untied three nets where they were fastened to the shore," he recalls. "The last one was too tight, and I had to cut the knot." Still, his night's work wasn't finished. Frightened and disoriented, many of the dolphins thrashed aimlessly in the now bloodied waters, unable to find their way to the sea. "I climbed into the water and tried to direct them out," Cate recalls. "I stayed on the island all night putting beached dolphins back in the water."

By morning, he had freed between 200 and 300 dolphins. Then the fishermen returned to their nets. "They were angry."  Cate spent three months in jail awaiting trial. He was found guilty of forcibly obstructing business, given a suspended six-month sentence and deported back to his home in Hawaii.

Dexter Cate was working with the U.S. based Fund for Animals. Previous to that he was a co-founder along with myself of Greenpeace Hawaii. "It was very important," he said, "that people recognize the true issue is not fisherman vs. dolphin nor America vs. Japan. The issue is how we relate to our environment. We are exploiting our land and our resources. Unless we change our ways, we can kiss our grandchildren goodbye."

Dexter's actions along with dramatic and explicit film footage from filmmaker Hardy Jones brought the dolphin killing to the attention of the world and thus also to Japan. Despite this, Dexter was accused of being an unwelcome foreigner and they even put on a play at Iki Island depicting Dexter as an evil spirit sent to steal the dolphins from brave Japanese fishermen.

Patrick Wall released dolphins again in 1981 and was jailed. I went myself to Iki Island in 1982 and thanks to the combined efforts of Cate, Wall, and Jones I was able to negotiate an end to that slaughter. What was interesting that year was that one of our crew was Mina Fukuda a Japanese flight attendant for Air France. She was our translator. When she arrived she was taken aside by the police and grilled. She told them to mind their own business. She told me later that the only reason that she could participate was because she lived in France and could ignore it, when they threatened to go to her employer or her family.

The reality is that within the Japanese system it is difficult to question authority without consequences. That is why the Japanese crew on our ships cover their faces except for the expats.

Back in 1975 when I and others worked with photographer Eugene Smith to help promote his dramatic photographic essay on Minamata and mercury poisoning, I helped to host him for presentations in Canada along with David Garrick and Taeko Miwa. Smith was not Japanese but he exposed Minamata to the world and whereas the Japanese government did very little to help the victims of Minamata before Smith, they were forced to address the issue because of Smith's activism. He also was told he was unwelcome in Japan and was so badly beaten by Japanese chemical workers that the injuries contributed to his premature death.

If not for Eugene Smith and his wife Eileen, the horror of Minamata would have been swept under the rug and forgotten.

In 2003 I sent Brooke MacDonald, a crewmember and photographer from the 2002/2003 Antarctic campaign to Taiji. “See if anything is going on there,” I asked her.

And there from an unobstructed viewpoint she took photographs which within days circulated around the world. These photographs and a video are arguably the best documentation ever taken at Taiji because there were no obstructions. When I saw the photos, I sent in a back up crew and Ric O'Barry joined us there. Allison Lance and Alex Cornelissen dove into the Cove, cut the nets and released 15 dolphins. They were arrested and spent four weeks in prison and were released when I paid their fines of $8,500 U.S.

The Tokyo lawyer I hired to defend them was shocked when he heard about what was going on in Taiji and he told me very bluntly, “I admire their passion but this is something no Japanese will ever do.”

When I asked why, he answered: “It is highly unusual to challenge the status quo here.”

Jokingly, I said, “Miyamoto Musahi did,” referring to the legendary Japanese samurai hero of the 17th  Century. He smiled and said, “and that is why Musashi is such a unique hero.”

And so Ric O'Barry having seen the difficulty releasing dolphins would pose, felt that direct liberation activism would quickly be stifled and would restrict access to Taiji completely and for that reason adopted the strategy of monitoring and documenting the slaughter. He then teamed up with Louis Psihoyos and together the produced the Academy Award-winning film, “The Cove.”

This was a western produced film but there is no doubt that the Japanese government sat up and took notice when it was nominated and won the best documentary award. With great reluctance we decided to refrain from further dolphin releases and do it Ric's way. And we believe that it is a strategy that can work but it will not work overnight. That is why we have called it Operation Infinite Patience.

So following the success of The Cove, Sea Shepherd returned to Taiji to carry on the strategy pioneered by Ric. To monitor and document within the restricted boundaries of Japanese law.

But we added something that had not been done before and that was to have a team on the ground in Taiji, day in and day out, continuously watching and documenting every movement of the killers.

Are the Cove Guardians unpopular with the Japanese fishermen? Of course they are.

We would be disappointed if we weren't.

We expect the fishermen and their supporters to demonize us. We don't expect our allies to embrace that demonization.

I will not name names or point at any group. I refuse to allow the dolphin killers and their supporters to entice Sea Shepherd into being divisive. We simply will not do it.

But I must address one criticism and again without naming names and that is that “he has no right to lead the Cove Guardians because he has never even been to Taiji.”

The present leader of the Cove Guardians is Melissa Seghal and she is perfectly qualified. She is passionate, determined, cool-headed, experienced and efficient. I think it is somewhat chauvinistic for critics on the ground in Taiji to ignore or deny the real leadership by a woman by lashing out at someone they think is the leader because he is male.

I do not call the shots for the Cove Guardians in Taiji. I never have. Melissa Sehgal does.

This is the Sea Shepherd Cove Guardian position:

Dolphin Project, Earth Island, Save Japan's Dolphins, Surfer for Cetaceans and FLIPPER. We wish all these groups every success and we appreciate everything they have done and are doing.