We already cull thousands of predatory sharks a year, but shark attacks are rising 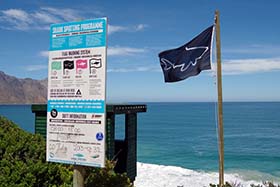 Shark Spotters at work in Cape Town, South Africa.
Photo: Blair RanfordThe Lennox-Ballina board riders club should be congratulated on attempting to bring the community together to find a common voice to the increasing shark encounters in the region. Community voices need to be heard on this topic. It is no surprise to me however, that without being given the opportunity to learn about the whole range of options available to them, and to then be surveyed on each option, the majority supported a cull of sharks. Without understanding the pros and cons of each option available, they have made an uninformed guess at what might work.

The media frenzy that followed is also to be expected. Across the globe, people are being told "Australians want to cull sharks." When in reality, the situation is much, much the opposite. A small minority of people support a shark cull. And when given factual information on the options available, those figures reduce even further.

But let's look as this further. New South Wales are already culling sharks... Thousands of predatory sharks are killed annually, mainly through commercial fishing and in shark nets. Yet shark bites and attacks continue to happen. Hawaii killed over 4,500 tiger sharks over 18 years and found that the level of shark attacks remained the same prior to, and after, culling sharks.

It is my belief that people want something to be done and immediately. And this is understandable. People are scared. But decisions on how to protect the community should not be based on fear. Two immediate solutions which have been proven to work and available right now for the Ballina and Lennox Head community are a shark spotting programme and electronic deterrents. As a scuba diving instructor, I use a Shark Shield for peace of mind. This device was recently proven to work 90% of the time by the University of Western Australia. Given that we can not ever protect ourselves 100% when entering the habitat of wildlife, and that shark encounters are rare, I like those odds.

Shark Spotters is an initiative that started over a decade ago by volunteers specifically for the surfing community in Cape Town, South Africa. They use a system of flags and alarms to alert ocean users of shark activity at eight beaches from 8am to 6pm. In close to 11 years they have spotted over 1,700 sharks and during this time there has been one fatality (low visibility spotting day and black flag up to indicate this) as well as a serious shark attack where the man chose to ignore all the warnings provided.

Again.... Given there is no 100% solution, this initiative offers a great deal more peace of mind than a 150m shark net which is not an enclosure that is in 17 days of the month, and in just the last 10 years alone, has not prevented these unwanted shark encounters at some of New South Wales most popular and netted beaches:

It's time to get real about solutions on how to protect loved ones.