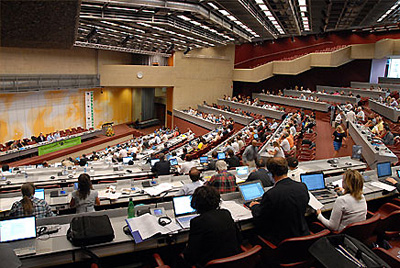 CITES delegates vote on protecting living species that, in most cases, humans have driven to the verge of extinction
Photo: CITESEveryone is getting fired up for the 16th meeting of the Conference of the Parties to the Convention on International Trade in Endangered Species of Wild Fauna and Flora better known as CITES CoP16 being held in Bangkok in March 2013. While we live in hope that the few people with integrity left in CITES (Sec. General Mr. John Scanlon, Chairman of the Animals Committee Snr. Solano, and a handful of others) can manage to turn the ship around, it's a big ship to turn around quickly. Sea Shepherd has offered our assistance and has applied pressure where needed, yet the fact remains there's still so much to fix.

Many NGO's, scientists, and governments have spent a lot of time preparing proposals that will hopefully convince a room full of trade-driven delegates to vote for protecting a living species that in most cases we have driven to the verge of extinction by our own greed. With the kind of trade money involved in the exploitation of many of these species, corruption will likely rear its head. In fact, it appears to have shown it's ugly face at the last CoP15 in Doha in  2010.

At the Doha 2010 CoP15 meeting of CITES, the Porbeagle shark was the only one to get protection status out of the eight sharks proposed. However, later in the conference, Singapore made a proposal for the debate on the Porbeagle to be re-opened. This was put to a vote, the outcome of which was 42 in favor, 84 against, and 14 abstentions. The debate was narrowly reopened by just one vote, and needless to say, in a subsequent vote, the proposal to list the Porbeagle shark was rejected.

Why is the relevant?

Sometime after the conference, Germany discovered that their vote AGAINST re-opening the debate had not been properly counted, so they lodged a formal complaint. “As can be confirmed by independent witnesses, representatives of the German delegation pushed the button “NO” at the time of the vote”. Had Germany’s vote been properly counted, there would have been 85 votes against reopening the debate, which means the Porbeagle shark would have been listed in CITES Appendix II.

Was the vote rigged?

We have formally demanded that CITES conduct a full investigation into this matter, overturn this illegal vote, and add the Porbeagle shark to CITES Appendix II.

Why did Germany not mention this sooner?

This leads into the realm of the use of the “Secret Ballot” in CITES. In the case of the Porbeagle shark vote, a secret ballot was in use, which was why Germany only discovered their vote had not been properly counted after the conference had finished. 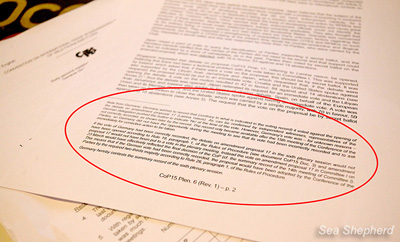 Use of Secret Ballots

Any country, at any time, can call for a “Secret Ballot” during a CoP meeting, if they have the support of 10 countries, ensuring the results of the vote (who voted for what) will not then be published. This only opens CITES up to opportunities for corruption.

For instance, country delegates could be bribed by a country wishing to control a vote, and simply instructed to support a secret ballot proposal to ensure that “no one will ever know you changed your vote”. This has happened before in the IWC (International Whaling Commission) where Japan was found to be buying votes in return for cash and prostitutes. This corruption was exposed by journalists of the Sunday Times of England.

CITES are aware that the use of secret ballots is an issue, and at the 62nd Meeting of the CITES Standing Committee in 2012, the Secretariat raised the subject of improving transparency of voting during meetings of the conference of the parties.“ It is notable that, of the 69 votes taken by secret ballot over the course of six meetings, 48 related to marine species or marine subjects (whales, turtles, sharks and other fish, and corals) and 17 related to the African elephant or ivory trade.” noted CITES.

There is no place for “Secret Ballots” in CITES, which is why we have asked that they be abolished altogether.