Commentary by the #StopTheGrind coalition and Sea Shepherd UK

Although disappointed with the outcome of the debate, the Stop the Grind Coalition and Sea Shepherd UK is pleased with the passionate discussions that took place on Monday 11th and the unanimity of politician’s positions against the Faroese Grindadrap hunts of dolphins and pilot whales.

Our coalition believes that this is not the end of the road for political change in the UK and will continue to advocate for trade policies that require other nations to uphold the same values around animal welfare standards that are applied in the UK. We will not give up in our fight to #stopthegrind and will continue to pursue every avenue available to us in order to ensure that dolphin and whale hunting in the Faroe Islands comes to an end once and for all.

LONDON UK, Monday 11th July - a parliamentary petitions committee debated a proposal to suspend the UK’s trade agreements with the Faroe Islands until all dolphin and whale hunts have been ended. The debate was attended by the new Minister for Trade, Andrew Griffiths, as well as a number of MPs representing constituencies in England, Scotland and Wales. Members from ‘Stop the Grind’, ‘Sea Shepherd UK’ and the ‘Born Free Foundation’ observed the debate which can be viewed online at: https://youtu.be/4Gd9QBpBwwA

The hour-long debate highlighted the unanimous position of all MPs and MSPs against the slaughter of small cetaceans - in any number. Minister John Nicholson passionately led the discussion laying out the numerous economic, social and political arguments in favour of suspending the trade agreement with the Faroe Islands. Nicholson highlighted the inequitable trade balance between the Faroe Islands and the UK – which has resulted in a 157% increase in Faroe Islands’ exports to the UK since the trade agreement was signed – stating “we have the power to make the Faroe Islands focus and resist.” Ben Lake MP argued that the last assessment on pilot whale populations was conducted in 1997 and therefore that any suggestion that a quota of this number is sustainable is utterly indefensible.

Kerry McCarthy MP also spoke ardently about the need for the UK government to “[use] trade negotiations to set a very clear marker as to what our standards are and what standards we are willing to accept from other nations.” She highlighted the fact that the renewal of the Faroe Islands trade agreement in 2019 would have presented a relevant opportunity to introduce animal welfare standards into trade policy and questioned Minister of Trade, Andrew Griffiths, as to why this had not taken place. Minister Griffith noted that “we all aim to achieve the same end – which is the end of this barbaric practice” and that the UK would use its diplomatic relationship with the Faroe Islands to continue to condemn the Grindadrap and advocate for policy change.

MPs shared Stop the Grind coalition’s concern with the recent announcement of a proposed temporary annual quota of 500 dolphins by the Faroe Islands arguing that “even one dolphin is too much for this government”. The quota, released the day before the debate in an apparent attempt to placate policymakers, is over 2.5x above the current 40 year average annual catch of dolphins and does not apply to long finned pilot whales which are typically killed in far greater numbers. 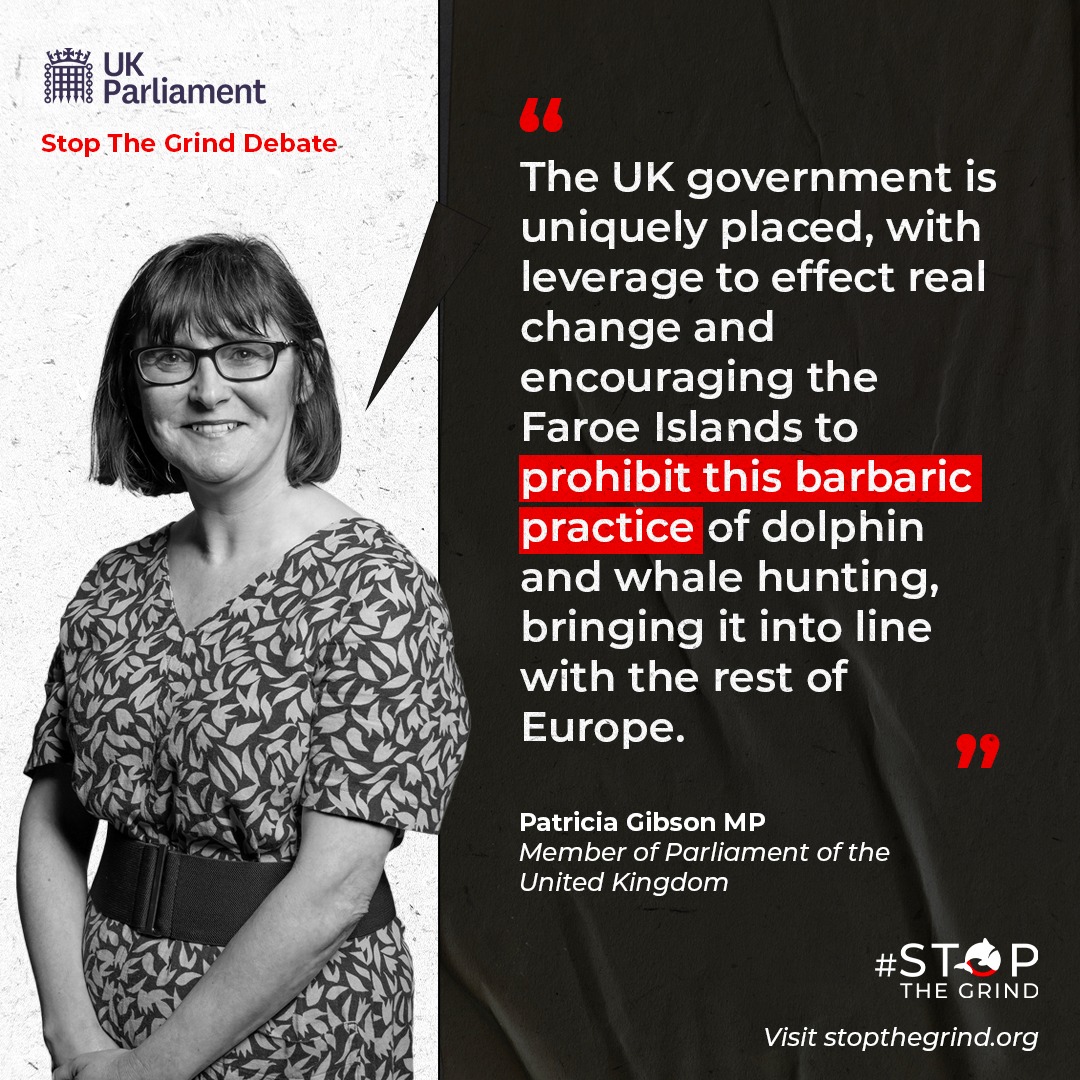 Although disappointed that the debate did not result in the suspension of the current Trade Agreement - the Stop the Grind Coalition was strongly encouraged by the large turnout of MPs for this discussion and compelling arguments made by government ministers and MPs from all sides. After years of intensive campaigning by Sea Shepherd, the Stop the Grind coalition considers it a huge win for this issue to be discussed with such rigor at the highest political level in the UK. The Coalition is optimistic that political change is possible and will continue to pursue every diplomatic avenue available to us to affect these objectives.

The UK parliamentary petition – which received more than 104,000 signatures - demonstrated the significant disapproval of the UK public towards the continuation of these hunts. As revealed by an independent OnePoll survey conducted by Stop the Grind and Sea Shepherd - more than 75% of the UK population supports economic sanctions on countries that practice whale hunting, and nearly 70% would consider joining a general boycott of products and services from these nations. We are calling on UK retailers to provide greater transparency over the origin of fish products and to stop the sale of Faroese products that indirectly support the continuation of this practice.

Dominic Dyer, policy advisor at the Born Free Foundation and initiator of the UK Parliamentary petition that required the debate shared his reflections, stating:

"The British Government cannot turn a blind eye to the brutal slaughter of whales and dolphins on the Faroe Islands when it enriches this small Island nation of less than 50,000 people at unprecedented rate as a result of this unbalanced and unethical Free Trade Agreement. No whales or dolphins should be brutally slaughtered in the Faroe Islands to put cod and farmed salmon on our supermarket shelves. If the UK is to remain a world leader in the protection of marine mammals, the Government must be willing to use trade sanctions to end this barbarism for good."

Robert Read, COO of Sea Shepherd UK was disappointed by the recent quota announcement and stated:

“It appears that international and domestic opposition to the barbaric grindadrap dolphin hunts has been rejected in favour of the killing of even dolphins by setting not a restrictive quota, but what some Faroese dolphin hunters will see as a ‘de facto target’ to be reached, with the Faroese government potentially aiming to increase this quote further to around 850 dolphins annually.
Sea Shepherd will continue our 4-decade long campaign together with the #StopTheGrind coalition, our crew from the UK, Europe, Scandinavia, now including volunteers from the Faroe Islands - until we together bring about an end to these cruel hunts of dolphins and pilot whales.”

The Stop the Grind campaign will now turn its focus on the upcoming discussions taking place at the International Whaling Commission meeting in Slovenia in October 2022. This meeting represents another important opportunity to demonstrate the extent of international opposition to the Grindadrap and to apply scrutiny to the arbitrary quota that has been put forward by the Faroese government. In addition, Sea Shepherd will continue its multi-decade campaign to document the hunts through its substantial team of photographers, videographers and media experts on the island. We are pleased with the recent developments in our campaign which demonstrate the power of the public to affect change and will continue to use every avenue available to us to assert pressure on the Faroe Islands government until the Grind comes to an end. 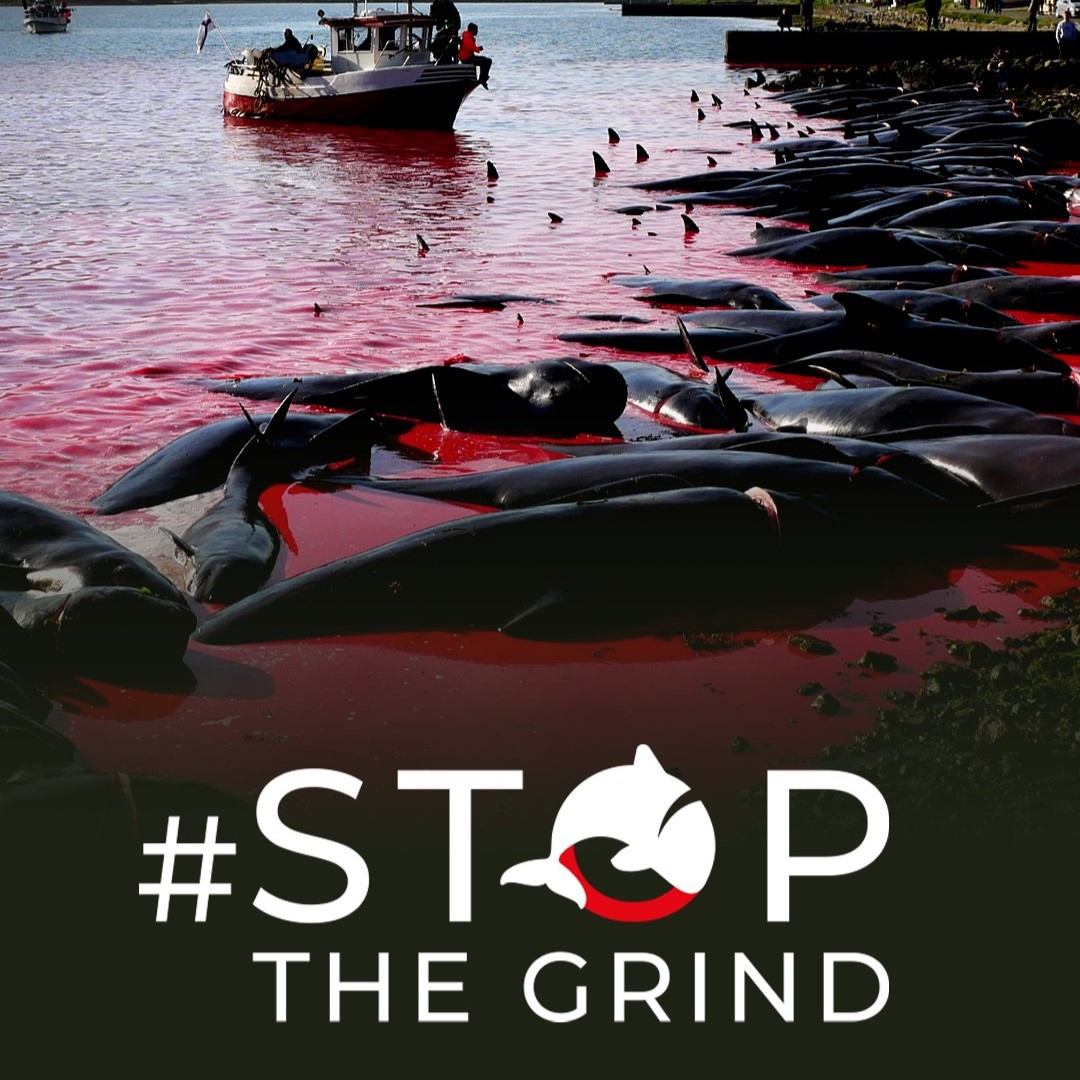 About the #stopthegrind coalition:
The Stop the Grind coalition is a global movement of organisations and individuals working together towards a ban of the Grindadráp dolphin and whale hunts by the Faroe Islands. The #stopthegrind campaign is a multi- year initiative that will include a variety of advocacy activities intended to generate sustained pressure on the Faroese government. Today, the coalition includes 30 coalition partner organisations and individuals from all regions globally. For more information, visit: www.stopthegrind.org

After the unprecedented massacre of 1428 Atlantic white sided dolphins on the 12th September last year - the Faroe Island government has set it's first annual quota of 500 dolphins for the next two years. However, the deceptive new annual 'quota' of 500 Atlantic White Sided Dolphins is far higher than the 40-year average of 193 killed per year!
The Faroese attempt to deceive the world’s media and placate the UK parliamentary petitions committee has failed.
Over the previous 40 years (1982 to 2021 inclusive) - a total of 46,253 cetaceans made up of 7 species of whales and dolphins have lost their lives on the Faroe Islands.
That is a yearly average of 1,156 - with the two most prolifically killed species being the long finned pilot whale (also a dolphin species) and Atlantic White Sided Dolphins.

You can read more about Sea Shepherd’s campaign at:
https://www.seashepherd.org.uk/campaigns/operation-bloody-fjords/

You can also view images from the campaign at: https://seashepherduk.myportfolio.com/