The Truth Behind All the Smoke and Mirrors 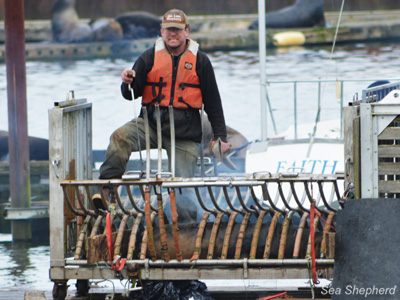 ODFW worker burns the flesh of a sea lion while wearing a hat reading "Sea Lion Shepherd"
Photo: Aaron Hall / Sea ShepherdYou wake up to the sounds of your friends and family screaming in pain and fear as the smell of burning flesh and hair fills the air.  You watch as a man you’ve never seen before grabs your loved ones by the back of the head, throws them down to the ground and while suppressing their neck with their boot, stabs a red hot iron into their flesh.  The sizzling sound of searing skin makes you sick to your stomach.  With a slightly sadistic smile, the man turns back towards the rest of your group and fear grips your heart as his soulless eyes peer straight into yours.

This may sound like a scene from a Hollywood horror film, but in fact this is what the sea lions along the Columbia River near the Bonneville Dam and Port of Astoria are facing at this very moment.

The sea lions are part of the class of animals called pinnipeds, which are provided federal protection under the Marine Mammal Protection Act along with over 125 species of marine animals in the United States.  In 1994, the federal government amended the MMPA to include a program to authorize and control the taking of marine mammals that affect commercial fishing operations regardless of their federally protected status.  Because of these unjust modifications to the law, the door is now open to allow sea lions to become scapegoats for man-made issues, greed, and overfishing.

In 2012, NOAA granted authorization to the states of Oregon, Washington, and Idaho for the lethal removal of up to 92 sea lions a year through June 2016.  The so-called crime they committed that deserves a death sentence sanctioned by both government and federal organizations is simple sustenance eating of salmon.  Upon being observed eating merely 5 salmon on separate occasions, a sea lion becomes registered on a kill list, authorizing the local rangers to lethally remove the “offending” sea lion.  The reasoning behind all of this?  The sea lions are accused of taking too many salmon and thus affecting the commercial fishing that occurs in the area.

The reality behind this is that it is all smoke and mirrors.  The sea lions are being heralded as mass murderers of salmon along the river when in actuality they take under 4% of the fish caught during the run.  The Bonneville Dam, birds, and commercial fishing EACH take between 10-20% of the salmon, yet all of these numbers are considered negligible according to the states while the percentage the sea lions take are considered a significant issue worthy of inhumane torture and slaughter.

All of this is set to run through May 31st.  Unlike the aforementioned Hollywood scene, there will be no high-paid actors, no script, and no red carpet interviews.  There will, however, be the dedicated volunteers known as the Dam Guardians, playing the role of producer, director, film crew, actor, and teacher, spending day and night, rain or shine, along the river, dam, and everywhere else that these precious creatures are being hazed, branded, and ultimately murdered.  They will be there to bring the saga of the sea lions to light and the injustices these animals will face as humanity turns a blind eye in favor of greed and apathy.  They will be the unsung heroes to each and every sea lion along the river.  They are their guardians, and they will protect those who can’t protect themselves.

For all of the latest updates, be sure to follow @DamGuardians on twitter and on Facebook at Sea Shepherd USA.  To apply to serve as a Dam Guardian, email: damguardian@seashepherd.org 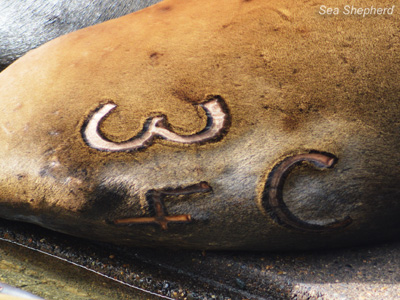