The Origin of Operation Albacore - a long walk, a long chase and a new front in the fight to protect African Wildlife 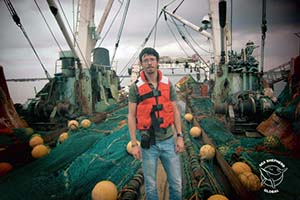 Captain Peter Hammarstedt inspects fishing trawler seized in Monrovia, Liberia during 2013. Photo: Sea Shepherd As we headed north up the west coast of Africa, we ticked off countries one-by-one. Like the check- list of vessels that we set out to pursue on Operation Icefish, we crossed out countries as we speculated endlessly as to where the F/V Thunder would make port call. South Africa seemed unlikely. Germany and South Africa were in the middle of war games and several frigates were steaming off the Cape of Good Hope. Namibia... maybe? We knew the owner of the F/V Thunder to be Spanish and there were plenty of Spanish fishing interests operating out of Walvis Bay.

But we passed Namibia heading north, and then subsequently Angola and Congo, puzzled by the scheming of the F/V Thunder’s captain, Luis Alfonso Rubio Cataldo; his dark intentions fuelled the imaginations of a Sea Shepherd crew that had now spent over one hundred days at sea. We traced our fingers along the coastlines marked on our charts, foreign shores that were as much mystery as a promise of an end to the relentless pursuit.

Suddenly the F/V Thunder changed course as if to make landfall. Heading deeper into the Gulf of Guinea, we raced to inform as many countries as possible that the F/V Thunder could be entering their waters in as little as 48 hours. Gabon was a possibility and replying to my alert was Mike Fay, an American conservation biologist and National Geographic Explorer in Residence working out of Libreville, who answered by typing his response in the subject line of an e-mail – “I have informed people who should be able to act... keep me informed we will nab this guy”. The Gabonese Navy was willing to arrest the F/V Thunder if it entered Gabonese waters and as a result of that commitment, Fay and I began to discuss bringing a Sea Shepherd ship to Gabon. 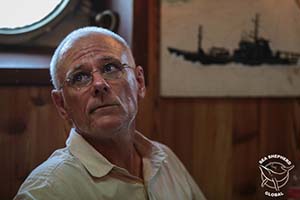 National Geographic Explorer in Residence Michael Fay on-board the M/Y Bob Barker in Libreville, Gabon. Photo: Denis Sinyakov The F/V Thunder never made it to Gabon. Cataldo deliberately sank his vessel in waters 3,000 meters deep off the coast of Sao Tome and Principe, after 110 days of chase by the M/Y Bob Barker. The sinking was surprising at first, but on reflection it was clear why Cataldo chose to make his wreck site 80 miles off the West African island state. He would have known that Sao Tome and Principe lacked the operational capability to salvage his ship, its coastal patrol boats were too limited in range. The Gulf of Guinea is plagued by logistical challenges when it comes to law enforcement. Those difficulties were exploited by Cataldo when he sank his ship; and those hurdles are also the reason why illegal, unreported and unregulated (IUU) fishing activity in West Africa is among the highest in the world.

I have no doubt that the longest chase of a poaching vessel in maritime history struck a chord with Fay. In 1999, he undertook his legendary MegaTransect of the Congo Basin, walking by foot for 455 consecutive days and inventorying every plant and animal that he and his team of Pygmy guides came across. At times the jungle was so thick that Fay’s party could only progress by 100 meters in one day. The expedition, unprecedented in its length and ambition, would serve as the foundation for creating 13 national parks in Gabon, a Gabonese conservation initiative so massive in scope that more than 15 percent of the land area of Gabon is now protected as national park. That the man who had completed the longest walk would team up with a crew that had just finished the longest chase was inevitable.

To draw up the initial plans for Operation Albacore, Fay flew me in his small Cessna airplane to Gabon’s Wonga Wongue Presidential Reserve, a wide expanse of savannah and jungle that is the backyard of Gabon’s capital city of Libreville. We discussed logistics as we tracked animals in the bush, Mike’s walking stride outpacing my sea legs that ran to keep up. As we reached a clearing in the jungle, we hunkered down beneath a tall Okoume tree, hiding behind its roots, as Fay mimicked the calls of a small undulate. A large bird of prey immediately swept down from the sky and we listened as twigs crunched and leaves crumbled under the feet of a troop of chimpanzees moving in a hunting expedition just beyond our line of sight. Life was all around us – we were surrounded by an ocean of sound. 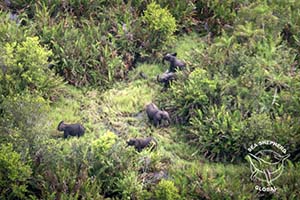 Herd of elephants roaming inside Loango National Park, Gabon. Photo: Denis Sinyakov When Fay isn’t tracking elephants from his Cessna as part of a Gabonese National Park Service project gathering intelligence on ivory poaching operations, he flies over tuna boats. It’s not a strange transition to go from defending forest wildlife to protecting ocean creatures, given that even Gabon’s unique wildlife can’t seem to decide between living on land or at sea. Gabon’s Western lowland gorillas can be seen playing on beaches that mark proposed future marine reserves and its famous ‘surfing hippos’ literally swim out to sea just for the joy of body-surfing back to shore.

Gabon’s elephants, gorillas and hippos are iconic, but equally important to Gabon’s biodiversity is tuna and Gabon has some of the richest tuna waters in the world. Twenty percent of the declared catch of tuna in the Atlantic is caught in Gabonese waters – and that’s just what is reported.

It is impossible to know what Cataldo was thinking when he made he made the decision to sink his own ship. But I’m sure that he never imagined that his actions would serve as the springboard for Sea Shepherd to become a force against IUU fishing in the waters of Central West Africa. As countries around the African continent combat elephant poaching and other wildlife crimes, Gabon is now opening up another necessary front in the fight to protect African wildlife, one where success will be measured by seized fishing vessels rather than confiscated ivory tusks. 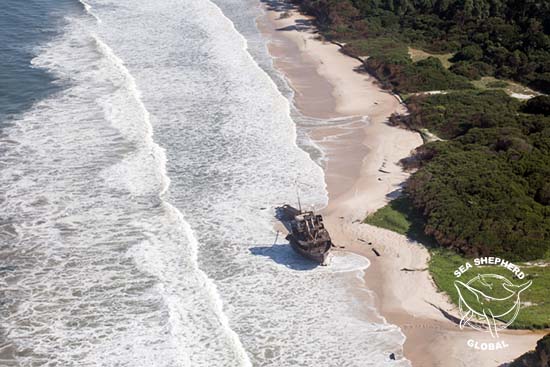