The Loggerheads of Santa Luzia 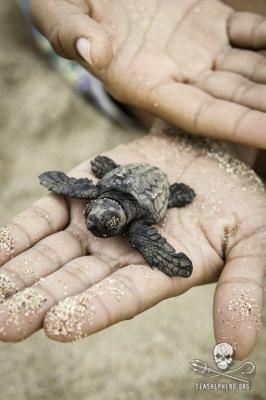 First hatchling from a marked nest named Jairo
Photo: Sea Shepherd / Simon AgerCape Verde is one of only ten marine biodiversity hotspots around the world, making it one of the ten places on the globe with the most threatened endemic marine species - and the third most important area in the world for the reproduction of sea turtles!

Continuing our work with local NGO Bisofera1 that saw the Brigitte Bardot embark on a Shearwater study, it couldn’t be more fitting to have the Sea Shepherd vessel, Jairo Mora Sandoval (named after the late conservationist, murdered in Costa Rica while protecting sea turtles) embark on a campaign to assist in the study, conservation and anti-poaching of loggerhead turtles on the beautiful island of Santa Luzia, Cape Verde. Marine biologist Patricia Rocha and Tommy Melo of Biosfera 1 head up the campaign to the island.

A protected marine reserve, only NGO Bisofera1 and local fishermen “grandfathered in” are permitted on the island. This is due to change for the fishermen, as the government moves to ban all but marine biologists from coming here.

The island, volcanic in nature, is home to barren landscapes reminiscent of the photos from Mars, and mountains that claw the sky. Sunrise sets the landscape ablaze in a wash of orange.

It is a harsh environment for any animal, with very little fresh water even during the rainy season. The trade winds provide a respite from the heat, the earth shimmering in the midday sun. Our base camp, a large military tent, plays host to Cape Verde sparrows and lizards. Ospreys are frequent visitors overhead.

Since the start of the season in late June to date, not more than 150 nests have been recorded - and counting - with an average of three to four new nests recorded most nights. These numbers are a far cry from last season, which saw more than one thousand nests recorded here. 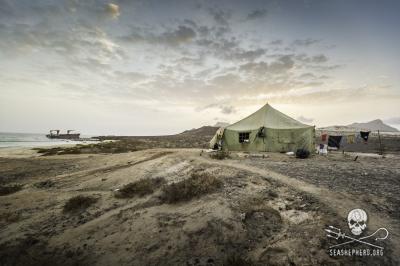 Santa Luzia basecamp
Photo: Sea Shepherd / Simon AgerWith two patrols, at 9pm and 5am, we cover the North and South nesting beaches of Francisca and Achados. A short hike of 2km across a raked wasteland separates the two. The landscape changes dramatically from volcanic rock, to scrubland, to sand dunes, and a mixture of volcanic black sand to dirty blonde.

We cover roughly 12km every night, as we walk our assigned beach twice, looking for nesting turtles and new nests. Depending on the tides, it can feel like trudging through molasses as you sink ankle-deep in the darkness with nothing but a red light to guide you.

The ‘Up’ track, or flipper footprints, of a turtle making its way from the ocean to the dunes is easy to spot. Then it is a waiting game for us as she heaves herself through the dunes to find the perfect ground in which to nest.

It is an amazing sight to behold, as a turtle carves out the perfect chamber in which to lay her eggs, going into a trance-like state. Her back flippers gently raise and lower as she drops between eighty to one hundred eggs, each the size of a ping-pong ball, before filling in the nest with sand.

A tiny GPS locator is painlessly attached to her front right flipper and a skin sample is taken, along with shell measurements, before she heads back to the ocean.

We mark the new nest via GPS and cut a deep trough in which to encircle the eggs with a protective fence. The eggs and newborn turtles are an easy target for the droves of crabs that linger in the surf in search of dinner. The aim is to have twenty-five “control” nests that are protected and monitored from inception to release.

Each night after roughly five to six hours spent patrolling, we head back to camp, or sleep in the dunes until sunrise if you’re on the 9pm patrol. We sit around to eat breakfast and correlate data. I learn some of the local language, Creole, picking out the growing collection of sand from my hair.

The daytime is for sleeping, showering in the ocean, dragging traditional fishing boats up the beach, and removing the sand that constantly blows through with the trade winds.

It will take sixty days before brand new life will climb up through the sand of a newly laid nest in a bid for the ocean — and we will be there to assist the turtles in their quest. We were lucky enough to hold in our hands one of the earliest hatchlings who made the dash — and we named him Jairo!