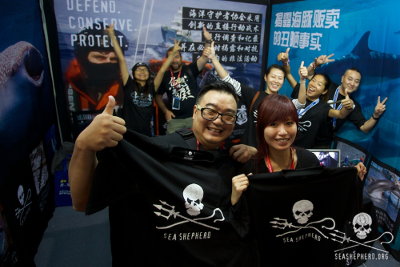 Sea Shepherd China supporters
Photo: Gary Stokes / Sea Shepherd With much of the spotlight constantly falling on Asia when it comes to ocean issues, it is with great pleasure that we can share what we’ve been up to over here in the Orient these past few months and the exciting times ahead for Sea Shepherd Asia.

March saw our first venture into China where we had a booth at the China Dive Show in Guangzhou. I wrongly thought that Sea Shepherd was unknown in China, so was pleasantly surprised when our booth was swamped with excited supporters. Besides selling out of Sea Shepherd merchandise, we had many inquiries into how to volunteer both on land and on the ships from Chinese supporters.

Jaki Teo, who is currently based in the Philippines but also runs Sea Shepherd Singapore along with the legendary Singaporean conservationist Grant Pereira, helped organize this China event. Hearing Jaki (who had just flown in from Taiji where she had been a Cove Guardian) explaining what Sea Shepherd is all about in Mandarin along with her husband Brett was music to my ears. Along with a local team of volunteers we had a very busy weekend and also had a visit from Miss Scuba International and Miss Scuba China. We also signed up many more supporters to our SSCS Weibo account (China’s equivalent of Twitter). The following day we visited the dried seafood markets of Guangzhou, where we filmed the shark fin trade at its worst. 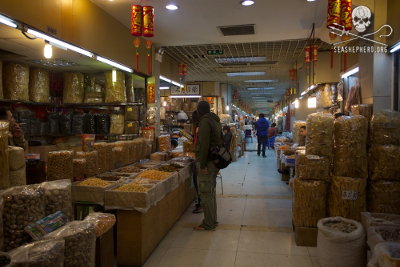 Guangzhou dried seafood market
Photo: Gary Stokes / Sea Shepherd The highlight of the weekend however was meeting Ping Bei, a very talented filmmaker who was about to give a presentation on stage. Here I was sitting in the shark fin capital of the world, watching Ping Bei give a talk on shark finning to a large audience in Mandarin. When he showed a snippet of his upcoming Mandarin shark film, the audience was glued to the screen. This was very powerful and gave me a glimmer of hope. It is people like him who will help change the way China thinks about sharks and the ocean in general.

So with the ball now rolling in China, I visited Malaysia last week where I met with Amin Mustapah the director of the newly formed Sea Shepherd Malaysia. We had an event lined up at a high profile mall, but not before a talk at one of Kuala Lumpur’s top universities UNITEN, organized by SSCS supporter Evelyn. With more than 100 students in the audience, Amin and I gave a talk on Sea Shepherd and I was again pleasantly surprised by the level of support we received. The university’s Dean dropped by for part of the talk, and has since invited us to come back and talk to the rest of the school, Thanks again to Evelyn and the wonderful students who came down and helped staff the booth in Publika Mall. We also had a visit from a biker chapter I’d encountered last year, all brandishing Sea Shepherd gear.

I met many incredible people in Kuala Lumpur, but one man was immensely impressive. Anuar Abdullah is a humble divemaster/artist who is mad about coral. We met over a roti and daal breakfast in a street food stall, the best cuisine in Malaysia! Among his first words were “Scientists think I’m crazy!” He then proceeded to tell me about his Coral Propagation Project and how it not only restores damaged reefs but more importantly it empowers the local coastal communities to make an alternative income from eco-tourism, turning them into stewards of the reef. I reassured Anuar that it’s only ‘crazy’ people that will change the world! Whilst sitting with him he received notification that he has been awarded Ocean Ambassador 2014/15 by ADEX, the Singapore-based dive show.

This week I will be travelling to ADEX Singapore to meet Grant Pereira and Jaki Teo and the team of Sea Shepherd Singapore and will also meet with Amin and Anuar for a very exciting announcement we’ll be making at ADEX.

Sea Shepherd Asia is growing from strength to strength in a region that is certainly in need of our work to defend, conserve and protect marine wildlife and their habitats. We will soon be looking to establish Sea Shepherd chapters in Thailand, Indonesia and the Philippines amongst other countries. Report from ADEX to follow, so don’t touch that dial...