The Japanese Industrialization of Ocean Destruction 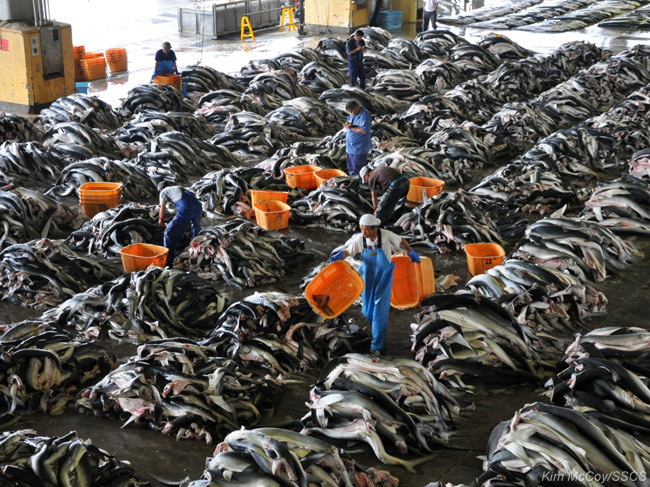 Sanriku Kakou Corporation harvests sharks
on an industrial scale
Photo: Kim McCoy / Sea Shepherd
Click to enlargeRecently Japan announced that despite the decision to protect five shark species at the CITES CoP16 meeting held in Bangkok this past March, it is entering a “reservation” (i.e., it will be ignoring the ruling) as it does not recognize the United Nations CITES as a body that should be managing species from the sea. Last time I checked, an endangered species is an endangered species, regardless of where it lives, but Japan and several other rogue nations such as Singapore, believe that CITES should ‘not get involved’ and the management of our fisheries should be left to RFMOs (Regional Fishery Management Organizations). The argument from most NGOs and scientists is that if the RFMOs were doing such a good job at managing their fisheries, the species would never need to be proposed to CITES for protection status.

I was at the CITES CoP16 meeting in Bangkok representing Sea Shepherd, and as I reported earlier I was astounded at the way business was being conducted by several member nations. When it comes to the global slaughter of sharks the spotlight always turns to China, the world’s largest consumers of the infamous Shark Fin Soup. However, something didn’t quite add up whilst at CITES.

The Chinese delegation, whilst obviously against the shark proposals, was dignified and passive in their lobbying. They engaged in side meetings held by the anti-shark fin groups and raised some valid points. Japan on the other hand was frantically running about, doing deals with other countries to secure their vote of support, almost as if their lives depended on it. When the vote went against them, I was half expecting some of the delegates to fall onto their swords, but the noble samurai culture obviously didn’t extend to the Japanese CITES Delegation.

Strangely at CITES, signatory countries can enter what’s known as a ‘reservation’ if a vote doesn’t go their way! This basically indicates to the rest of the world that they will not follow the decisions that everyone voted on, sadly making CITES impotent in the eyes of many. Japan’s recent “reservation” is further evidence that the shark problem is as much a Japanese issue as a Chinese one. Despite Japan’s “reservation,” China pleasantly surprised the world with the following statement;

“China has advised the CITES Secretariat that, while it opposed the inclusion of these shark species in the CITES Appendices at CoP16 and continues to have concerns regarding implementation, in the spirit of international cooperation under CITES, with full respect for the decisions adopted at CoP16, China will apply the CITES rules to these species. Hence it did not enter any reservations.”

So why is Japan so concerned about any protection for the sharks? Surely it should be the Chinese that are raising hell?

Well since the 1950s, Japan has been harvesting sharks on an industrial scale, almost completely under the radar. The best news for Japan was when the Chinese love and taste for Shark Fin Soup saw a re-invention and really took off in the 1960s. The conservation world has been drawn towards this convenient distraction. Whilst everyone is blaming China for the global slaughter of sharks, no one has noticed the Japanese and their industrial factories that they have set up around the world processing sharks for the past 60 years. Don’t get me wrong, the shark fin demand is a driving factor in the global mass slaughter of sharks, but there’s also something else lurking below the surface… 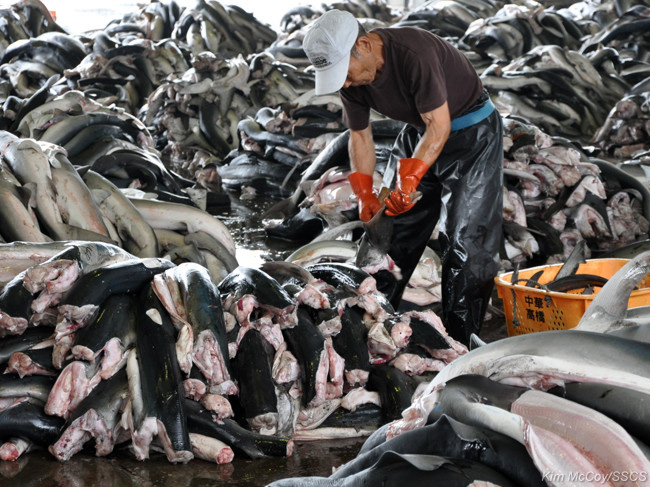 A Sanriku Kakou Corporation employee removes the fins from one of the sharks
Photo: Kim McCoy / Sea Shepherd

Chondroitin Sulfate comes from shark cartilage and is paired with Glucosamine in pharmaceuticals as a relief for joint pain. It is sold worldwide. I’m sure you’ve all seen the shark capsules in every pharmacy, next to your multi-vitamins!

One of the largest Japanese companies producing Chondroitin Sulfate is the Seikagaku Corporation. Formed in 1947, their industrial production of chondroitin sulfate as a pharmaceutical began in 1950.

Today their leading product driving their overseas business is the joint function improving agent ARTZ® and SUPARTZ®, launched in Sweden in 1992 and now approved in 18 countries. In the USA, the ageing population is estimated to be increasing by more than 3% per annum and therefore the demand for joint function improving drugs is expected to grow.

In the early 2000s, they were quoted as saying,

“We use more sharks than anyone else in the world!”

With the world’s fishing fleet targeting sharks for their highly valued fins, companies such as Sanriku Kakou Corporation buy up the apparently low-value carcasses almost as a ‘disposal favor’. They then process the cartilage and sell to pharmaceutical companies such as the Seikagaku Corporation, Kenko Corporation or Maruha Nichiro Foods Inc. The 2011 tsunami caused “catastrophic damage” to the Sanriku Kakou raw material processing plant at Kesennuma City, however due to stockpiles of chondroitin sulfate, pharmaceutical production and delivery were not affected.

According to an FAO Report, cartilage from the blue shark (Prionace glaucais) contains the highest levels of chondroitin sulfate. The report goes on to say, “some shark species caught by tuna long-line fisheries are used for domestic consumption as meat, except for the blue shark which is not suitable to be used as either fresh or frozen meat, but can be used as raw material for processed foods such as surimi”.

So it’s quite obvious that Japan are targeting blue sharks in the hundreds of thousands for their highly valued chondroitin sulfate. Why else would they target blue sharks over other species? The shark processing plant at Kesennuma was completely wiped out in the 2011 tsunami, but it was also the first facility to be immediately rebuilt with tsunami relief funds — yet another great example of your kid’s bake-sale fundraiser money going to a good cause. If your relief fund donations are not being used to fund the whalers so they can kill whales in the Southern Ocean, the monies are going to process the mass slaughter of sharks!

With the recent addition of these five shark species to the CITES appendices, Japan is obviously concerned that this will open the flood gates to a multitude of other sharks (including blues) to also become listed at the next CITES CoP17.

Also interesting to note, the Japanese Fishery Agency has no biological regulations, no catch quotas and no provision for resource management set up for sharks, according to the FAO Report.

The demand for this magical joint remedy (that’s also wrongly being touted as an “anti-cancer drug”) is very apparent and obviously quite lucrative. A similar processing facility in Costa Rica, a US-owned cartilage-extracting plant in Puntarenas, (Corporacion Procesadora Cartilago, SA) exported 131,275 kg of cartilage in a year. This plant alone uses 235,000 large coastal sharks every month to make its pills, most of which are shipped to the USA and Europe.

This gives a clear picture as to the scale of the chondroitin sulfate demand and its obvious effect on the world’s population of sharks. One ridiculous argument that the Japanese Fisheries Agency always makes is that ‘at least they are utilizing every part of the shark!’ This may be true, but that is not the issue here. The issue is the industrial scale on which the world’s sharks are being literally fished to death…and extinction. Whether they are being completely utilized or not is no longer the issue.

A dead shark is a dead shark, and one less apex predator to keep the ocean eco-systems in check. 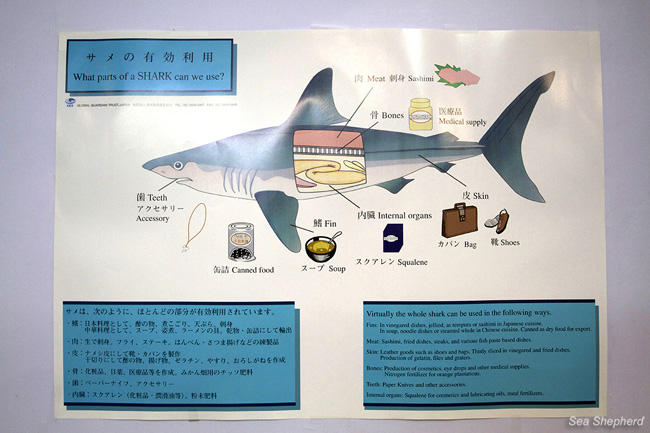 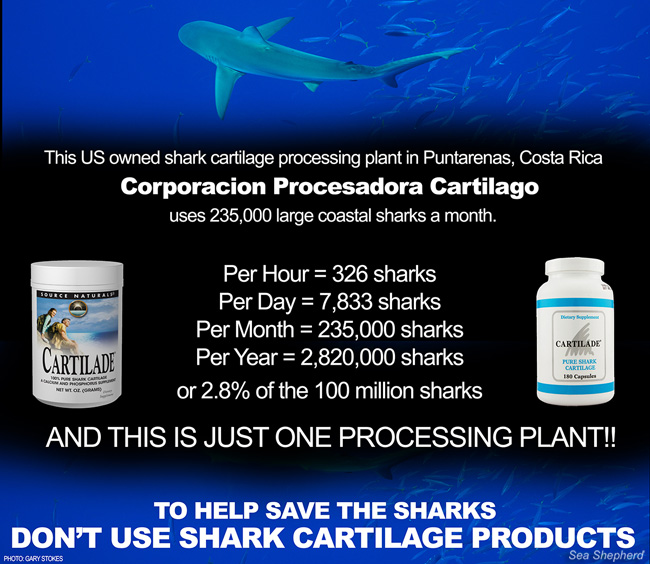 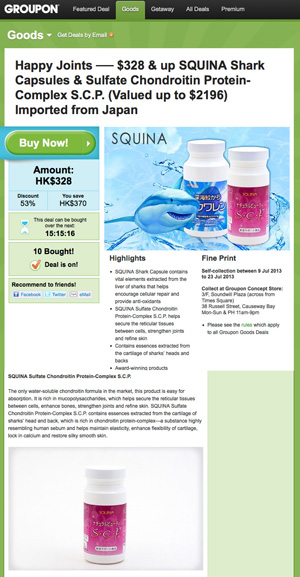