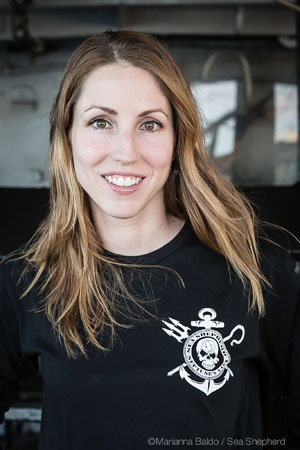 Andrea Gordon, Veteran crew member and
Ship manager, Bob Barker
photo: Sea Shepherd/Marianna Baldo Iceland announced their intention to continue their criminal commercial whaling of endangered species with the slaughter of at least 154 fin whales. As a result of commercial whaling in the 20th century, the highly intelligent and evolved fin whales are now listed on the IUCN Red List of Endangered Species.   The public plan is for Icelandic death dealing company, Hvalur hf, to sell the whale carcasses to buyers in Japan, contravening the Convention on International Trade in Endangered Species (CITES) by shipping of these dead ocean giants halfway around the world.

Governments should swiftly and severely sanction Iceland for their criminal whaling conspiracy. Iceland's premeditated resumption of the killing and shipping of endangered species exposes the gaping lack of governmental resolve and political will to enforce international conservation law. There is no point in having laws if they're not enforced. Bank robbers don't announce they're targeting a bank because they would never get away with it. Iceland is greedily robbing the world bank of biodiversity at the bidding of wealthy Japanese buyers.

Money can be replaced. Once the great whales follow in the footsteps of the great auk, they'll be gone forever. The great auk was a large, flightless black and white bird very similar to penguins that was once plentiful in the Northern Atlantic. European fishermen and explorers quickly killed off many of these mighty birds. Even when 19th century scientists realized the great auk was in danger of disappearing, their scarcity increased the bounty on its head. In 1844, Icelandic fishermen found the last breeding pair and egg existing on a remote Icelandic island known as “Great Auk Rock.” At the bidding of a wealthy buyer, Icelandic fishermen Jón Brandsson and Sigurður Ísleifsson strangled the planet's only remaining breeding pair. Ketill Ketilsson smashed their sole fertile egg with his boot.   And with that callous stomp of a boot, the biological wealth of the world was forever decreased.

Now, history is repeating itself, but on the world stage. Japan is the wealthy buyer bidding Iceland to be the boot-stomping, bank-robbing bandit of endangered fin whales. We don't need any more gut-wrenching photos of blood gushing from these dying majestic creatures to raise awareness of their plight, just like we don't need public awareness campaigns against bank robbing. We know it's illegal and we know it's wrong. We need action, enforcement and resolve of governments to uphold the laws they've put in place.

What is there for the governments of the world to lose by enforcing international law with the provisions they've already put in place to do so? There is nothing for them to individually lose, but the environmental security of the entire planet is on the line.

We don't live on this planet alone.   Every living thing in the ocean is intimately connected to everything else - and our existence is inexorably linked to the oceans. As the rate of extinctions increase, the best safeguard for ensuring life on this beautiful blue planet continues is the diversity of species to weather the warming world. Captain Paul Watson once commented that “If we can’t save the whales, we will fail to save the oceans and if the oceans die, then we all die, and all the great dreams of humanity will be blown away as dust in the winds of time.”

During Operation Zero Tolerance, Sea Shepherd Australia went to the far ends of the earth risking our lives and ships to save the great whales with a 100% success rate of saving endangered fin whales. 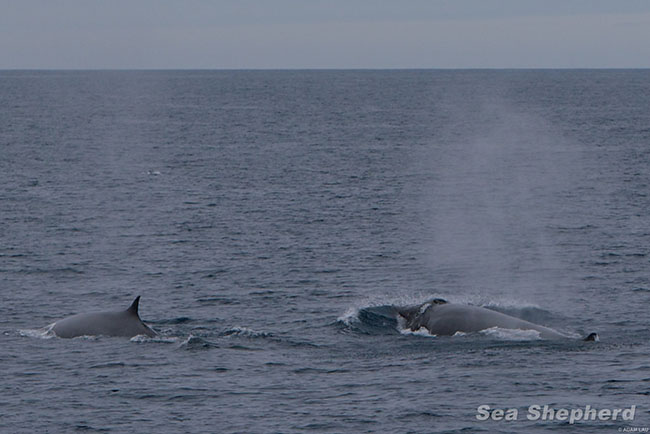