Commentary by Captain of the Steve Irwin, Siddharth Chakravarty 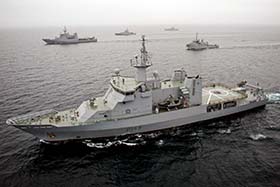 HMNZS Otago (here seen in the Hauraki Gulf) has returned from Antarctica.
(Photo: Creative Commons)For the second time this year, a New Zealand Defence Force's (NZDF) patrol vessel has returned from the Antarctic. The last patrol concluded in January when the HMNZS Wellington located, but was unable to board, the illegal fishing vessels Yongding, S onghua and Kunlun. The evidence that was collected by the patrol vessel in January has helped the Spanish government levy 17.4 million euro worth of fines on the operators of those illegal vessels.

This time the HMNZS Otago has come back just 17 days after the fishing season began in the Ross Sea, and with the fishing season expected to last for another two months, one hopes that the return is for a quick refueling and restocking before heading South again.

Eight licensed vessels were inspected during the patrol and apparently no Illegal, Unreported and Unregulated (IUU) fishing activity was detected during the 17 days of this patrol.

While this gives the impression that the NZDF is doing everything that it can in the Southern Ocean, the reality is very different.

Because of these reasons, the illegal fishing vessels Yongding, Songhua and the Kunlun were all allowed to continue fishing in the presence of the HMNZS Wellington earlier this year. The catch of all three vessels was ultimately laundered into the markets and has vanished without a trace.

If the New Zealand government is committed to spending taxpayer money to regulate Antarctica then it must do justice to this budget. It must adapt to the resilient crime syndicates and their operations. It must tackle illegality by being a step ahead of the poachers. It must expand its definition of illegality to include the illegal whaling operations of Japan. And it must dispatch the HMNZS Otago once again to the Southern Ocean for the remainder of the summer.