The Gauntlet of Praia de Achados

The garbage laden beach of Anchado
Photo: Sea Shepherd / Simon AgerSanta Luzia — one of ten islands that make up Cape Verde and born from volcanic rock.

Even in the rainy season, it barely rains; it is a dry, barren and desolate place. The sun beating down, the sparrows and lizards seek refuge in the shade of our tent, scavenging water from a rusty tin cup placed under a leaky water barrel.

Santa Luzia should be pristine; no one but marine biologists and traditional fishermen frequent the island. There is nothing but the mountains rising from the ocean floor, black sand blending into dirty blonde sand dunes flowing into crystal white sandy beaches.

The same could be said for the beach of Francisca. It is immaculate, but for the garbage left by fishermen who may soon no longer frequent this place.

Two kilometers of no man’s land sit between the beaches of Francisca and Achados. Geckos are the only creatures that seem hardy enough to frequent the bush scrub around here, only revealing themselves in the cool of night. 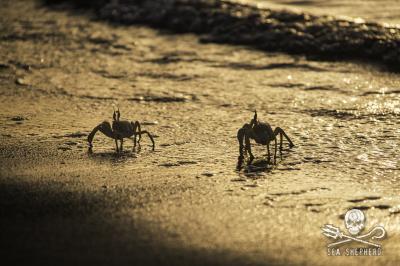 Ghost crabs hover in the surf
Photo: Sea Shepherd / Simon AgerApproaching Achados, slowly the signs appear that there is something quite different about this beach. Remnants of plastic containers start to litter the sand dunes, growing in number as the dunes splay open onto the beach.

It is not a beach of pure white sand, but a beach of man-made garbage. 3 km of plastic bottles, containers, longlines, trawling nets raked and shredded across the rocks, furniture, box ties, plastic crates — it’s all here!

Any thoughts of doing a beach clean-up were quickly removed from my mind as I surveyed this man-made disaster. I watched the next wave of garbage rolling around in the surf ready to be dumped onto the sand. We counted as many as seventy different countries on the water bottles before we stopped counting.

My thoughts turned to the turtles and the gauntlet they have to run to survive here.

A loggerhead weighing in at 220lbs pulled itself up the beach, feeling her way through the darkness and fighting her way through the mountains of garbage in search of a place to nest. We found many nest attempts abandoned on this beach. The garbage is not just on the surface, but meters deep. Shards of plastic and nylon rope protrude into what should have been home to one hundred new lives. 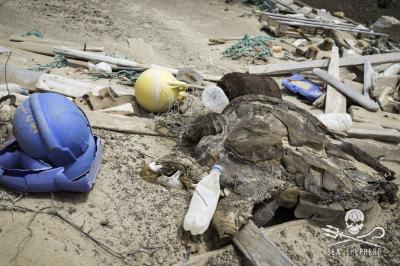 The turtles need to lay their eggs. A few attempts can be made in one night before returning to the sea and trying again another night.

Unfortunately, many turtles head inland, searching for an environment fit to nest. It is these turtles that also get lost. They will only survive one day under the harsh sun that will rise in a few short hours.

Biosfera 1 has rescued many disorientated turtles, returning them to the ocean. Some are not so lucky, succumbing to the heat of the day and cooking inside their shell, laden with eggs.

A female will return to run this gauntlet five times in one season to lay up to five hundred eggs. She must do this two years in a row for the species to even have a chance of surviving.

Santa Luzia is a harsh environment. If it’s not the heat of the sun, the ghost crabs feasting on eggs and hatchlings, and the predators that await turtles in the ocean, it is the illegal killing of turtles throughout the islands, the longliners and the gauntlet of garbage that threaten the very survival of the loggerhead turtle!

Only one in one thousand will grow up to be a mature breeding adult!