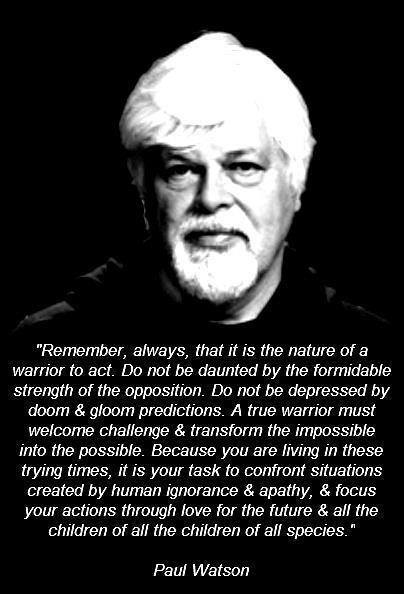 Today is the first day of summer and it marks four complete seasons that I have been in exile and unable to return home.

Passionate Sea Shepherd volunteers saved 932 whales during Operation Zero Tolerance in the Southern Ocean including 50 endangered Fin whales. And our volunteers were saving lives all over the globe from Taiji, Japan to LaReunion Island in the Indian Ocean to the coast of Brazil in the SouthAtlantic and onto the Galapagos in the Pacific.

Many of the new-born whale calves born this spring offAustralia and Tonga and New Zealand  were born because Sea Shepherd intervened. That has brought me more joy than anything else this year.

I think the most rewarding thing however is the growing realization that the Sea Shepherd Conservation Society is not a centralized organization. It is a global movement.

What I established in 1977 is now a free flowing movement with thousands of passionate and imaginative men and women worldwide doing what they can with the resources available to them to defend and protect our oceans.

And we are doing so non-violently and effectively.

In many ways I think it has been a positive thing that I have been forced by Japanese pressure to be exiled from the movement that I created. As a result I have seen so many people around the world rise to the occasion with campaigns protecting everything from gooseneck barnacles and sea cucumbers to sharks, turtles and whales.

Neither one person nor one organization can change theworld, but a free flowing ever evolving movement that encourages individuals to act, to create campaigns and ideas and to exercise their courage and their initiative against the forces of oceanic and global destruction can indeed change the world.

These corporations and governments so intent upon destroying life in our oceans must understand that there are millions of people who will defend the endangered, protected and threatened species and habitats.

We will continue to fight the whalers, sealers, turtle and fish poachers, shark finners and polluters on the sea, in the courts and in the media.

Last month Jairo Mora Sandoval, a young conservationist protecting sea-turtles in Costa Rica was brutally murdered. He was only 26. Compared to his sacrifice, my exile, and the legal suits against us are relatively minor.

This is serious business. Defending diversity in the oceans is the single most important cause on the planet. More important than curing cancer, or defeating terrorism, more important that anything that we can imagine because the ocean is our life support system and without the ocean, we die, all of us.

And thus this is a movement that cuts across all cultural, class and political concerns because it involves us all, even those people too ecologically ignorant to understand the fragile web of interdependent life that holds our global life support system together.

If over the last century millions have died in wars todefend real estate and oil wells, I think that risking all to defend the future of life in the seas and thus our own survival is a far more noble pursuit.

If there is one message that I have spent my life trying to convey it is simply this; if the oceans die, we die!

Everything we do sends ripples, positive or negative, into the future and the future of all the people and animals yet unborn is determined by our actions.

And as for my own situation, I am free upon the seas and it has not been unpleasant. In fact it has been quite the adventure. I have crossed three oceans to the far side of the world from where I began without papers or harassment. I have been able to swim with the sharks and turtles, to watch the whales, the dolphins and the albatross, to see the daily rising and setting of the sun, to feel the wind in my hair and the taste of salt on mylips.

I have not felt so excitingly alive in years as I have over the past year. I have friends and supporters, a family that supports me and I have enemies to keep me strong and vigilant.

In short I have everything that I need to be secure and happy. It also gives me time to write.

Tomorrow will mark the day when the moon will be the closest to the Earth for the entire year. At night the galaxy tosses tens of thousands of stars across the sky.  Each day reveals a new pattern of clouds and new experiences with the weather and the winds. Life is beautiful and a treasure to be appreciated every single day.

So to all the Sea Shepherd warriors around the world all I can say is you are all doing an incredible job in your efforts to defend life in the ocean and on this planet.  I may not be able to be with you, to speak directly to you but I am, and I alwayswill be, with you all.