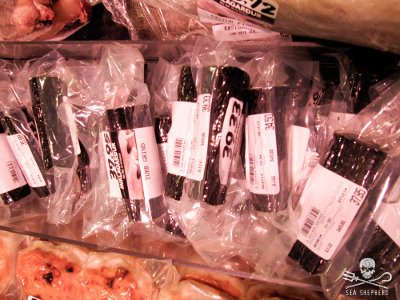 Pilot whale meat for sale in a supermarket
Photo: Sea Shepherd / Erwin VermeulenEvery year the discussion flares up if there is a commercial aspect to the Faroese pilot whale slaughter.

A transaction is usually defined as commercial when money changes hands with the intent of profit at the receiver’s end. It is legal for the Faroes to sell their share in a grind and some of the slain whales are auctioned off to pay for community costs after a kill, like the cranes that lift dead whales out of the water, cleaning up the docks, transporting waste to the dumpsites, etc. This is how the meat ends up in restaurants and supermarkets.

If a restaurant like Marco Polo then puts a ‘Grindabuffur’ on the menu for 320 Kr that is clearly a commercial endeavor.

In the spring of 2009 the Danish CITES Authority instructed the Danish Customs that CITES permits were no longer required due to changed EU legislation. The new rules on imports are based on EU Commission Regulation (EF) no. 206/2009 of 5th March 2009 on imports to the Community of shipments of animal products to be used for private consumption and amendment to regulation (EF) no. 13/2004. According to these new EU rules, whale products for private consumption can be imported from the Faroe Islands to Denmark without restrictions. This new policy took away any insight into how much pilot whale meat crosses from the Faroes into Denmark. 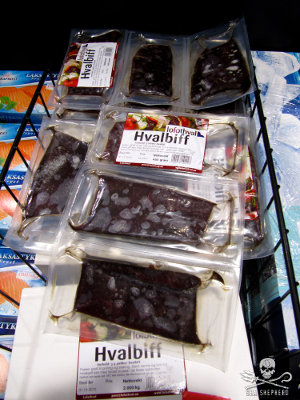 Minke whale meat can be imported to the Faroe Islands because they have not implemented CITES regulations
Photo: Sea Shepherd /
Erwin VermeulenUnder this special exemption clause, import of pilot whale meat and blubber into Denmark for non-commercial purposes is allowed. Whale tissue can be imported for scientific research, private individuals can import for their own consumption and the Faroese Society in Denmark imports meat and blubber, which is used during celebrations for the members of the society.

The declared imports before 2009 vary between 100 and 200 kg per year. Even though the exemption clearly states non-commercial purposes, tourists can order “grind” or “blackfish” in the Faroer Home House in Copenhagen. This is not a soup kitchen; you have to pay for what you order and it is therefore a commercial sale of pilot whale meat.

Denmark became a Party to CITES (the Convention on International Trade in Endangered Species of Wild Fauna and Flora) in October 1977. When ratifying, Denmark informed CITES that it would become applicable to the Faroe Islands only when relevant legislation had come into place there. As the years went by it became clear that the Faroe Islands have no intention at all of implementing or enforcing CITES. The Faroese authorities have said that they do not see that CITES can contribute anything positive for the Faroe Islands. This for instance, makes it possible for the Faroese to import minke whale meat from Norway.

The Faroe Islands have a history of commercial whaling for great whales. The Faroese whalers learned the trade onboard whaling ships of other nations, primarily Norway. From 1894 whaling was conducted from Faroese soil itself. In 1949, for instance, 50 sperm whales were caught in Nolsoyarfjord. The largest Faroese catch was in 1909 when 773 great whales were taken. The whaling station in vid Áir, featured, in “Whale Wars: Viking Shores,” functioned far into the 20th century.

The Faroese whalers continued the commercial take of fin whales even after the IWC in 1976 decided on a zero quota, when the North Atlantic fin whale population was estimated to be only 10% of its original size.

Faroese whalers caught one fin whale in 1977, seven in 1978 and eleven in 1979. When the IWC urged the Faroe Islands/Denmark to stop, a proposal for scientific research was submitted to the IWC in 1981, which the IWC Scientific Committee rejected. Nevertheless, the Faroe Islands continued whaling and took an additional thirteen fin whales in the period from 1981 to 1984.

They stopped whaling, but apparently could not get over the taste. In 2002 there is a first mention of whale meat export to the Faroes: The fisheries website, Intrafish, reports that despite heavy criticism over its plans to export whale meat to Iceland, Norway is now considering starting up a similar trade with the Faroe Islands.

According to statistical information from Norway, in 2003 a total of 8,345 kg of whale meat was exported to Faroe Islands with a value of around $66,500 USD or around $8 USD per kilo.

Before the exports from Norway began, the Norwegian and Danish authorities corresponded to agree that such trade would not be in breach of CITES (Convention on International Trade in Endangered Species of Wild Flora and Fauna).

The minke whale has been listed on CITES Appendix I since 1986 when it was included in the IWC moratorium and all commercial hunting was halted. Norway continued the hunt in spite of the moratorium and took a reservation against the Appendix I listing under CITES. Therefore Norway is able to export whale meat to the Faroe Islands after issuing a CITES permit, according to the rules applying to CITES Appendix II. Trade in Appendix II specimens requires an export, but not an import permit, meaning that only the exporting state has to determine that the specimen was legally acquired. 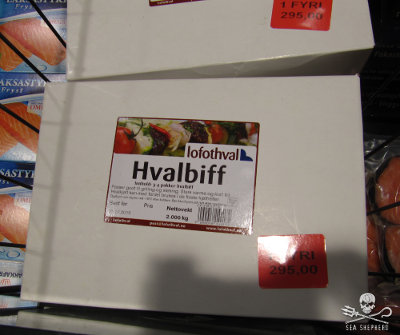 Minke whale meat packaged up for sale in a local supermarket
Photo: Sea Shepherd / Erwin VermeulenDenmark has no such reservation, and therefore the import of Appendix I meat should not be allowed, but since the Faroe Islands still have no CITES legislation in place (more than 35 years after Denmark ratified CITES), the government of the Faroe Islands just accepted the Norwegian CITES export permit for the transaction.

CITES Secretary-General Willem Wijnstekers ruled the deal illegal because of Denmark's membership. The CITES Secretariat has advised that the Faroe Islands are part of the Danish ratification and therefore CITES Appendix I rules apply.

Both Denmark and the Faroes hold the position that the Faroe Islands are not part of the EU and that the EU Regulations on Wildlife Trade, which implements and enforces CITES in the EU, do not apply to the Faroe Islands.

So while Denmark finds excuses to exempt part of its kingdom from conservation measures, the Faroes are free to sponsor commercial whaling.

When the IWC ban on commercial whaling went into effect in 1986, Norway originally agreed to halt trade in whale products - despite the fact that it issued a reservation to the Appendix I listing of whales at CITES. However, when the Norwegian Seafood Export Council reported that the inability of Norwegian whaling companies to export whale products to Japan cost the companies millions of kroner, the Norwegian government in 2001 decided to resume exports of meat and blubber to Japan. At that time it was reported in the press that as much as 600 tonnes of whale blubber were being stored in freezers in Northern Norway. Transactions, however, stalled after tests confirmed elevated levels of toxins such as dioxin and PCBs in the meat. Still it was generally agreed that exports represent the only viable means of making large profits from meat and blubber for the Norwegian whaling industry.

Mercury and toxins did not represent the only health concerns. In 2008 the Lofothval whaling company of Norway requested a CITES permit to ship 720 kg of Minke whale meat to the Faroes. The shipment was suspended when it was discovered that the whale meat had been stored in questionable conditions at a Norwegian pet food factory in Trøgstad. The entire amount of whale meat was confiscated by health officials and declared unsafe for human consumption. Despite this confiscation, exports to the Faroes soon resumed, and there have been at least 15 shipments of whale meat from Norway to the Faroes since 2003, totaling 11,516 kg.

Most of the whale meat shipments go to Faroese supermarkets partially owned by Icelandic interests.

In August of 2003, Iceland made the decision to resume whaling for Minke whales under a self-allocated scientific permit.

In a September 2006 BBC News article entitled “Iceland to begin whale meat trade,” Iceland's whaling commissioner Stefan Asmundsson told the BBC that up to two tonnes of minke whale meat would be exported to the Faroe Islands.

That same month it was reported by Icelandic media that 500 kg of minke whale meat was being exported to the Faroe Islands, with an expected price of 600 Icelandic kronur ($8.57 USD) per kilo. Gunnar Bergmann Jonsson of the whaling company that shipped the minke whale meat to the Faroes said that he hoped "that this will give impetus to the push to resume commercial whaling."

Just as in Norway, the survival of the whaling industry in Iceland depends heavily on exports.

From the above it must be clear that even if you consider the commercial aspect of the grind to be insignificant, that the Faroese government firmly supports commercial whaling and is, together with Japan, the nation that through whale meat imports keeps the dying Norwegian and Icelandic commercial whaling programs from exhaling their last putrid breath.

Briefing on Whaling Links and Cooperation Between Norway and Iceland, including Whale Meat Exports (April 2013)

Report on whaling in the Faroe Islands by Birgith Sloth