The Cove Guardians and the Sea Shepherd Policy of Gaiatsu 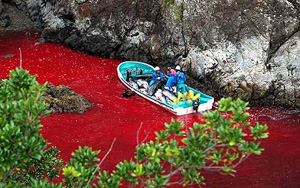 The Cove
Photo: Brooke MacDonald 2003The Cove Guardians are passionately compassionate men and women who come from all over the world including Japan. They come at their own expense. The are up before the sun rises and they are on the ground after the sun sets. There are Cove Guardians in Taiji every day between September 1st and March 1st, year after year. Six months every year on the ground bearing witness to one of the most remorseless and brutal massacres of marine mammals on the planet.

They are armed with the most powerful weapon in the world ­the camera.

It is however an emotionally draining exercise in daily defending dolphins.

The Cove Guardians operate non-violently within the boundaries of practicality and Japanese law.

They are there to remind the government of Japan and the fishermen of Taiji, that the world is watching everyday, and will continue to do so until this obscene slaughter is ended.

Sea Shepherd first exposed this brutal slaughter ten years ago. Our photos and video went around the world in October 2003. That was when the campaign started.

We were involved many years before that in working to successfully shut down the dolphin slaughter at Iki Island, Japan. We have been defending dolphins in Japan since 1979.

Ric disagreed with our cutting the nets and returned on his own after that because he was concerned about being connected to Sea Shepherd. He felt this would make it more difficult to be in Taiji. That was
understandable and his efforts paid off with the release of the Academy Award-winning film The Cove directed by Louis Psihoyos.

Sea Shepherd has always applauded Ric O'Barry and The Dolphin Project. The dolphins of Taiji need the help of everyone that can contribute towards ending this bloody pitiless slaughter.

Sea Shepherd decided to reorganize in 2010 with the Cove Guardians to bring people from around the world to Taiji.

Sea Shepherd Cove Guardians, Save Japan's Dolphin's, Surfers for Cetaceans and the Dolphin Project have always been united by the common goal of ending this slaughter. We have different approaches but we have the same objective.

What the Cove Guardians are doing in Taiji has never been done before. Never before have volunteers traveled at their own expense to participate in a six month long vigil, year after year.

I admire and respect everyone who is involved with opposing the massacre at Taiji. But my admiration for the volunteers who participate in the Cove Guardian program is immense. These men and women are average people motivated by a deep sense of compassion and love for nature and animals. They gain nothing for themselves and suffer the emotional trauma of witnessing the atrocities against the these gentle creatures.

For the critics who say that we must wait for the Japanese people to act I can only say we welcome the participation of Japanese citizens and many have participated but the price they pay is to have their families harassed by the Japanese police.

As a Canadian, I know that it was not the Canadian people that brought the commercial seal hunt to its knees economically. It was pressure from outside of Canada.

Governments tend to pay more attention to outside pressure than from pressure from within.

This is especially true of Japan.

In Japan this is called "gaiatsu," meaning foreign pressure and it has been proven to work.

Every single change in environmental policy initiated in Japan came about because of foreign pressure. In organizing the Cove Guardian program I studied a paper by Isao Miyaoka of the Japanese Institute of
Social Science entitled "Foreign Pressure and the Japanese Policymaking Process."

"In the late 1980s and early 1990s, Japan was subject to severe international criticisms in the area of global environmental issues. By 1992, consequently, Japan had changed its policies on ozone
depletion, drift-net fishing, and imports of African elephant ivory." Isao Miyaoka

Sea Shepherd was very much involved in putting preesure on Japan with drift net fishing from 1987 until 1992 when drift nets were finally banned.

Sea Shepherd favors the gaiatsu approach in that it is foreign pressure that will end the dolphin slaughter.

The Dolphin Project and Sea Shepherd both participate in demonstrations before Japanese embassies and consulates.

The Cove Guardian program can work in cooperation with the Dolphin Project and Sea Shepherd would very much like to see this continued cooperation. We do not see it as a conflict, we see it as an opportunity to unite both domestic and foreign pressure to end the slaughter of the dolphins.

The dolphins are also not the property of the Japanese and every person on the planet has a right and a duty to speak up on their behalf. Compassion does not have a race or a culture. Kindness does not
have a nationality.

Opposition to the dolphin killing must be united both by foreign influences and domestic involvement. The Cove Guardians are in Taiji to stay and although The Dolphin Project wants us to withdraw, we cannot and we will not do so.

It is our intention to work with and support the efforts of all groups opposed to the slaughter of the dolphins and it is my belief that if we are to succeed we must have a confederacy of compassion and we must always think first and foremost and above all else of the welfare and the survival of the dolphins.

Foreign Pressure and the Japanese Policymaking Process. By Isao Miyaoka of the Japanese Institute of Social Science