The Bloody Science of Whaling

by Captain Siddharth Chakravarty
Captain of The Steve Irwin 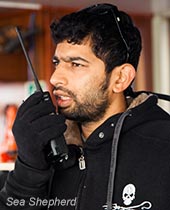 Captain Siddharth Chakravarty
Photo: Eliza MuirheadConservative estimates put the number of whales killed between 1904 and 1987 in the Antarctic by commercial whaling fleets at 1,339,232. That’s an average of 16,000 whales per year – year after year – for 83 years.

The marauding ships wiped out one whale species after another in a descending order of size until their operations were halted by the moratorium on commercial whaling in 1986/87. By this time the whaling industry had decimated the baleen whale populations of the Southern Ocean.

In its scientific whaling plans, the Institute of Cetacean Research (ICR), Japan proposes some ridiculous ideas and here are just some of them:

There are a lot of different excuses given and double standards employed by the ICR to disguise their commercial whaling operations. To begin with, their science is hollow and is in fact solely aimed at cheating the system. The time interval since commercial whaling operations ceased to when the above plan was put forward is too short to allow for an assessment of whale stocks and competition. And, if for a brief moment we assumed that the ICR’s science was legitimate, then we should examine what the point of this current science is. It is not to revive the depleted whale stocks. It is definitely not to return the Antarctic whales to their pre-whaling abundance levels. And it most certainly is not aimed at the conservation of whales. It is aimed at one thing and one thing alone - the commercial, profit-making, ugly business of whale meat. 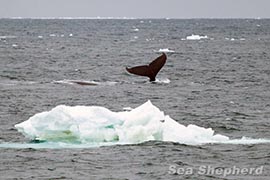 One of Antarctica’s Humpbacks, targeted by the
Japanese whaling fleet  Photo: Eliza MuirheadThe Southern Ocean Whale Sanctuary was born out of an idea of conservation. It was to allow the whales to prosper. It was based on the remorse of the lost lives of over 1.3 million whales. It was established after the international community acknowledged that the whales needed a safe haven.

Japan did not take the 1.3 million whales alone, but it did play a part. It needs to take responsibility and ownership for the terrible slaughter. It needs to respect the ideology behind the sanctuary. It needs to end its commercial whaling operations. The only thing Japan can do to allow for the resurgence of the whales is to leave the sanctuary. Here the wonder of wild nature will play out and the balance in the eco-system will be restored. Bogus science is not the way ahead.

Whether the operation is labelled as “science” or “research” and the slaughter as “harvesting,” “management,” “selective use” or “utilisation of resources,” for the whales it simply means “death.” Death has no place inside a sanctuary and if Japan’s whaling fleet cannot make that simple connection, then as individuals we bear the moral and ethical obligation to stop them until they do.

For the Japanese whalers, I quote Bob Brown, campaign leader of Operation Relentless, “Stoking your boilers is the perverse idea, which some people never grow out of, that you are closer to supremacy over nature if you kill other creatures bigger, faster or more mysterious than yourselves, no matter how unthreatening, amiable or technologically innocent those creatures may be.”