Ten Questions With Answers from the Southern Ocean

Sea Shepherd Australia selected ten questions from people from around the world for Sea Shepherd founder Paul Watson. These are his responses. 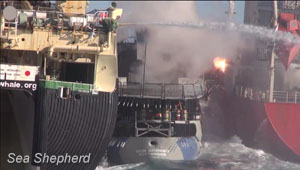 Japanese coast guard explodes "flash bang" grenade on the deck of the fuel tanker, Sun Laurel
photo: Sea Shepherd Australia Question #1: What is your position with the ships and campaigns this year?

Question #2: Who is making the decisions?

Captain Paul Watson: The campaign is being led and directed by Sea Shepherd Australia Directors Bob Brown and Jeff Hansen, and by the three captains of the Bob Barker, Sam Simon and Steve Irwin.

Question #3: The Ninth District U.S. Court panel has called Sea Shepherd pirates. How do you respond to this?

Captain Paul Watson: Obviously they have their opinion. And it is an opinion entirely devoid of real evidence. It is in contrast to the earlier opinion of the highly-respected Seattle Judge Richard Jones so there is certainly a difference of opinion. Bobby Kennedy is an attorney and he disagrees with the issuing of an injunction against Sea Shepherd USA. We are called many names but the real question is whether Sea Shepherd is breaking the law.  The fact is that Sea Shepherd USA has fully complied with the injunction and the Ninth District Court has no jurisdiction over Australians and other non-U.S. citizens on Australian- and Dutch-flagged vessels operating out of Australia and New Zealand in international and Australian waters. This is simply outside of the jurisdiction of the Ninth Circuit Court. They have jurisdiction over me as a U.S. citizen but I am not breaching the 500-yard restriction and I am not physically participating in opposing the illegal Japanese whaling activities.

Question #4: The Sea Shepherd ships have sustained severe damage over the last week in clashes with the Japanese factory ship Nisshin Maru. Are you concerned that Captain Tomoyuki Ogawa and the Japanese whalers will sink your vessels?

Captain Paul Watson: We are very concerned. They destroyed the vessel Ady Gil in 2010 and suffered not even a reprimand. The Japanese government backs the violent attacks on Sea Shepherd ships that endanger the lives of our crew. It is better however that the ships sustain the damage than for whales to die. As Captain John Paul Jones, founder of the United States Navy once said, “Give me a fair ship that I may sail her into harm’s way.” That is the feeling of the Sea Shepherd captains.

Question #5: Is saving the lives of whales worth risking human life?

Question #6: Your critics call you criminals, pirates, militants, and extremists.  How do you respond to those accusations?

Captain Paul Watson: Sea Shepherd is not a protest organization. Sea Shepherd is an interventionist organization. We intervene against illegal activities. We intervene to uphold international conservation law in accordance with the principles established by the United Nations World Charter for Nature that allows for intervention by non-governmental organization to stop crimes against nature and the environment. The Japanese whalers are targeting endangered Fin and Humpback whales and protected Minke whales in the internationally established Southern Ocean Whale Sanctuary in violation of a global moratorium on commercial whaling. They are in contempt of a ruling by the Australian Federal Court prohibiting the killing of whales in the Australian Whale Sanctuary. They are in violation of the Antarctic Treaty by transporting Heavy Fuel Oil below Sixty Degrees South. They are in violation of Environment Protection and Biodiversity Conservation Act (EPBC Act).

Question #7: Why is Sea Shepherd taking these particular actions? There must be other ways to oppose the Japanese whaling program.

Captain Paul Watson: Diplomacy has failed. The Japanese have been illegally killing whales since 1987. Nothing has stopped them. Greenpeace failed to stop them. In 1999 the Howard government enacted the Environment Protection and Biodiversity Conservation Act (EPBC Act) which declared an 'Australian Whale Sanctuary' prohibiting all whaling within the sanctuary offshore Australia, including waters offshore the Australian Antarctic Territory in the Southern Ocean. The act applied not only to Australians but to all other nations, including Japan. Japan has ignored this law and was found to have violated it ,and in a 2008 Australian Court ruling Japan was ordered to cease whaling in the waters of the Australian Antarctic Territory. Australia has not taken measures to uphold this ruling. Sea Shepherd Australia has chosen to do so on behalf of all Australians.

Question #8: Why are Sea Shepherd volunteers so passionate about saving whales?

Captain Paul Watson: I could answer that question with another question: Why are people not passionate about saving whales? These are magnificent, socially complex, highly intelligent, sentient beings and they are an important part of all oceanic eco-systems. Whaling has no place in the 21st Century. It is a cruel and wasteful industry. Whale watching is a far more lucrative industry and thus in economic terms, whales are more valuable alive rather than dead.  We see the bigger picture. All the world’s fisheries are seriously being diminished. If the whales, sharks, turtles, and birds are removed, if plankton populations are reduced more than they have already been, our oceans will simply stagnate and die. We cannot live anywhere on this planet without a living healthy ocean. It is as simple as that. And how can any intelligent human being not be passionate about humanity's survival? "If the oceans DIE, humanity dies"

Question #9: Will Sea Shepherd Australia return to the Southern Ocean for the next whaling season?

Question #10: After the campaign, where will you go?

Captain Paul Watson: Japan is exercising a great deal of political influence and spending a great amount of money to apprehend me. For a charge related to “trespassing” and “obstruction of business” they have put me on the Interpol Red List. No one has ever been put on the Red list for such minor offenses and these charges are based solely on the accusations of Peter Bethune in return for receiving a suspended sentence. This is a list for serial killers and war criminals, but it does illustrate the politics behind the decision. I was never under any illusion that tackling the Japanese whaling industry would be easy and I am not surprised. However I can serve my clients, the whales, dolphins, sharks and other marine species best at sea and not in a Japanese prison; and so until the lawyers resolve my legal situation the safest place for me is at sea. Currently I am a man without a country, but then again I am a man who is free upon the ocean. Most importantly, I have the satisfaction of having helped to save thousands of whales and that in itself is worth the trials and tribulations. 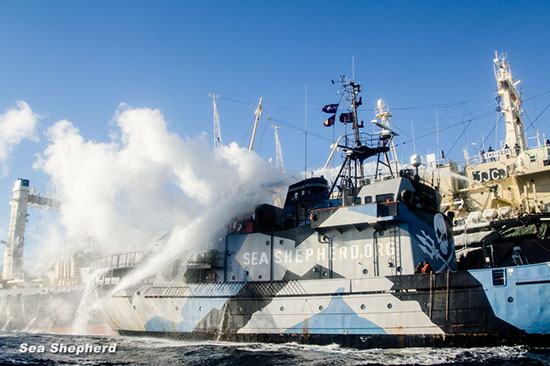 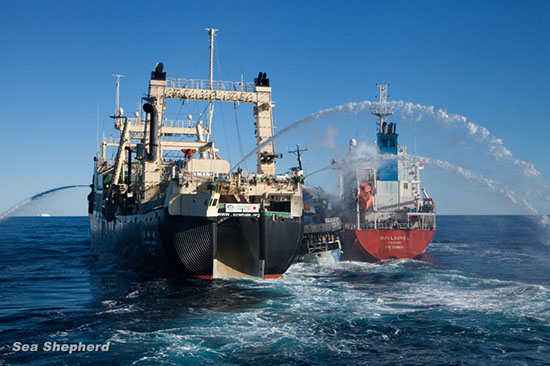 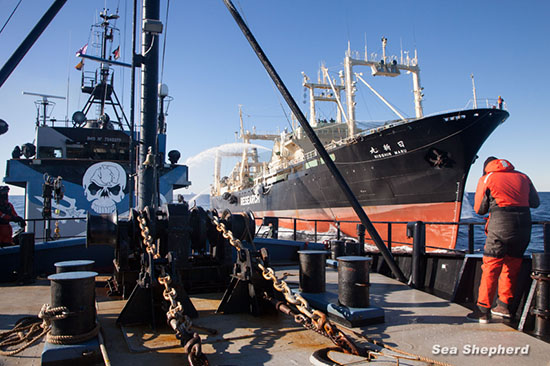