Sharks on the Roof 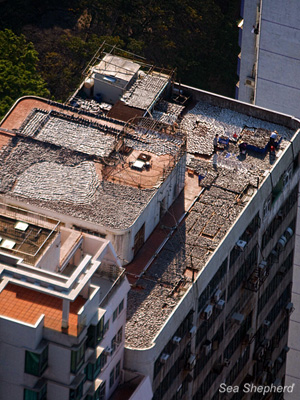 Traders have taken to drying fins secretly on rooftops following public outcry over sidewalks covered in shark fins.
Photo: Gary Stokes / Sea ShepherdThe New Year rang in with a tip off here in Hong Kong. A concerned citizen of the world had discovered a roof covered with shark fins in the quiet neighborhood of Kennedy Town in Hong Kong. So with cameras in hand and only a few hours sleep from the revelry of the night before, we went in search of one of the most unpleasant commodities Hong Kong has to offer: shark fins!

Last year I had received a similar call to come and check out a street full of fins, and the footage captured went viral. Hence the traders have run to the rooftops to hide. Like the inhumane dolphin killers of Taiji, these shark-mongers of death are likewise camera shy and try hard to hide their dirty business from the world. Unfortunately for them, over the next 72+ hours they would have the eyes of the world watching their barbaric operation, and there would be very little they could do but hope we would just go away!

In no time at all, two other friends/photographers Paul Hilton and Alex Hofford were also on the scene and the three of us took great pleasure in exposing their evil doings. The pictures are now thankfully spread far and wide, but now what?

Raising awareness is very important to inform the un-informed. The problem here is that the shark fin industry barbarically slaughters millions of sharks a year unregulated and unchecked. Kill numbers are bounced about, but the truth is no one really knows precisely how many sharks are being wiped out, we just know it’s a huge number! What we do know is sharks are creatures that are slow to reproduce, and are apex predators who keep the oceans eco-systems in balance. Removing and wiping them out of existence just for the greed and bragging rights of a tasteless bowl of soup is absolute proof that we as a species have completely disconnected from our natural world — a world that we are a part of and a world that keeps us alive.

SHARKS NEED PROTECTION NOW - We need CITES [Convention on International Trade in Endangered Species] to do the right thing and base protection status on scientific facts not financial greed. We have spent the past year helping CITES get its house in order by highlighting some of its many issues, and applying external pressure where it was needed. After exposing Dr Giam for his blatantly conflicting roles as: “Alternate Representative for Asia on the CITES Animals Committee” and “Representative for the Singapore & HK Shark Fin Traders," Sea Shepherd also highlighted the need for the Conflict of Interest Provisos so that never again can someone influence the voting for their own personal interests and financial gain. We await the outcome of a vote in early March for this proviso, just before the CoP16 (16th Conference of the Parties to the United Nations Framework Convention on Climate Change and 6th Session of the Meeting of the Parties to the Kyoto Protocol).

By getting CITES in order we can only hope that the science will be heard in Bangkok this year at CoP16, and sharks will get the protection that they so desperately require. My only fear is the massive faith that the conservation movement has placed in getting species listed as Appendix II. Whilst an improvement, this gives very little protection and only helps regulate and track trade, meaning an exporting country only needs to provide an export permit. The importing country needs nothing at all, and the species can be sold at will. I found this out to my dismay when I discovered whale shark fins for sale in a shop in Hong Kong. When I contacted the authorities, they said that it was perfectly legal.

Therefore, what is needed is for just one of the popular species to get Appendix I status — the same status given to ivory. This makes all killing and trade illegal. The benefit that sharks will have is what is called "a look-a-like clause." Any fin that ‘could possibly be’ from an Appendix I species will have to be DNA-checked to prove its origin species. This practice will be time-draining and expensive.

Only when the killing and trade become officially illegal will we see a stop to these horrific scenes. 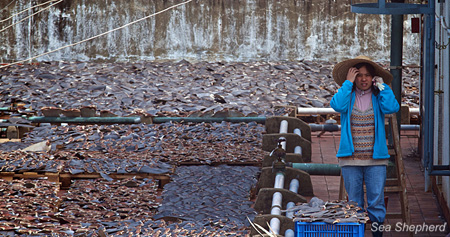 A worker is surrounded by a sea of drying shark fins.
Photo: Gary Stokes / Sea Shepherd 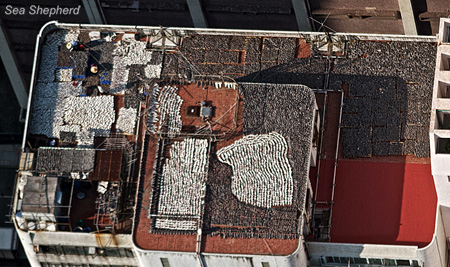 Over 10,000 shark fins dry on a roof in Hong Kong. After the fins are cut from a shark, the animal is usually thrown back into the water to drown or bleed to death.
Photo: Gary Stokes / Sea Shepherd 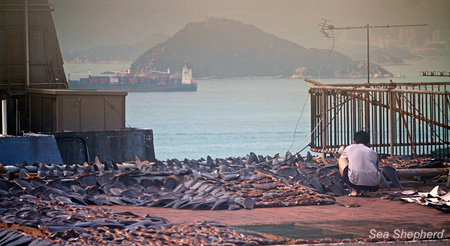 Hong Kong is regarded as the shark fin capital of the world. Millions of sharks are killed each year as the industry remains mostly unregulated and unchecked.
Photo: Gary Stokes / Sea Shepherd

Shark Fins in the Streets of Hong Kong

Why Sharks Are Not Protected