Shark media hysteria has to go 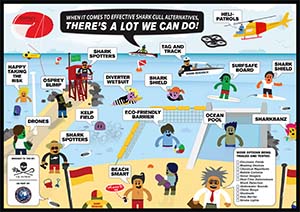 There are many shark safety solutions now available
(click to enlarge)Media coverage of an issue has considerable bearing on public opinion. That is why it is concerning for those involved in marine and shark conservation, to read and hear, some of the recent reports about unwanted shark encounters. Despite scientific evidence that many shark species are at risk of extinction, most media coverage of late has emphasized the risks sharks pose to people. But this is not just due to a recent fatal shark bite; a report that studied Australian media portrayal of sharks and their conservation found that between 2000 and 2010, “shark attacks” accounted for 58% of 300 shark-related articles.

While sharks do from time to time mistakenly and tragically fatally bite ocean users, the reality is that seeing a shark, experiencing an unwanted encounter with one and being bitten by a shark is an extremely rare event. Despite what some media reports may have you believe, the ocean is not full of snapping jaws, lurking just where you are about to dip your big toe. Additionally, as per our previous post, there are a range of preventative measures water users can take to reduce their vulnerability to rare unwanted shark encounters. With greater numbers of shark species being declared threatened, it is time to balance out the reporting, where currently only 15% of articles in Australia about sharks focus on conservation efforts.

Whenever the term “shark attack” is stated, most people conjure up images of major injuries to a person – but often in the media, shark encounters whereby no contact or injury has occurred between humans and sharks are called “attacks.” In fact, 38% of reported shark “attacks” in NSW between 1979 and 2009 did not involve any injuries. It would appear that not all shark “attacks” are created equal, particularly when “attacks” are also used to describe bites on vessels.

In this particular article for example, the term shark attack in the heading, would best be replaced with the term shark bite, so that it isn’t classified the same as the encounter Sean Pollard faced as a result of a shark attack.

Any discussions about sharks going “rogue” should also be completely eliminated from public discourse. Sharks already conjure up enough fear thanks to movies like “Jaws” without adding unnecessary fear. The rogue shark theory has never been proven scientifically and therefore is simply an unsubstantiated theory. According to the Society of Professional Journalists Code of Ethics, media outlets referring to rogue sharks are being unethical, as “ethical journalism strives to ensure the free exchange of information that is accurate, fair and thorough.”

The same can be said about sharks "stalking,” “lurking” or “menacing,” all of which, according to social anthropologist, Adrian Pearce, are emotive words typically reserved for criminal behaviour on a serious scale. Petty thieves for example don’t stalk, rapists do. Armed robbers are menacing, but shoplifters not so much,” Pearce states.

In fact, sharks are characterized as a type of fish, and just like fish they swim. If we are to continue to consider the Society of Professional Journalists Code of Ethics, media articles inappropriately demonizing sharks are not minimizing harm; they are exacerbating it. Media reports using emotive language to depict sharks show their bias, and the result is the potential to cause more fear, harm and distress in the public. Consideration of the long-term implications of depicting shark movements this way should be given, particularly when sharks have scientifically been proven to provide healthy oceans and are declining at a rapid rate.

Over-the-top shark imagery that dramatizes shark encounters is good for one thing only, and that is to increase viewing numbers or readership. Other than that, it creates unnecessary fear and anxiety in the community and disrespects those involved in an unwanted shark encounter and their loved ones. Psychologist, Sharon Burden, who tragically lost her son Kyle in 2011 to a fatal white shark attack, states that the last thing she wanted to see was images of shark jaws next to pictures of her son. “One of the things you try not to think about is the point of contact between the shark and Kyle, but the images used by some media outlets put a set of jaws right next to an image of Kyle taken from social media,” Sharon stated. “We need to show some sensitivity to the people who are left behind and still grieving. Every time you show a person’s image next to a picture of an aggressive shark it’s a powerful reminder of the event, and you can’t always avoid it when it’s in the newspaper you read everyday for your news.”

It is also interesting to note, that the media feel as though it is appropriate to continuously repeat the “honour roll” of shark attack victims, discarding the concern that this must have for loved ones. Very rarely do we see this occur as frequently for fatal car accidents or murders and I can not help but think what benefit the list brings, apart from bringing more crisis to what already is a tragic event.

Another way the media likes to discuss sharks, is by writing about people’s fear of them. Paradoxically, some media outlets continue to feed this fear, creating concerns of a generation of children scared of going into the ocean. This understandably leads to concerned parents demanding governments to do something, despite the already rare chance of a fatal shark bite. And though there are ways to reduce unwanted shark encounters, the reality is, the ocean is a wilderness and nothing will offer 100% security for all ocean users choosing to recreate in a marine environment.

With negative articles and shark imagery dominating the overall news coverage of sharks, it is little wonder that many people are concerned about the risk from – rather than to sharks.

It would be nice to be approached more frequently for comments by the media writing articles about the threats of overfishing, habitat loss and climate change. Sharks are especially vulnerable to these threats due to sharks’ slow-growth rates, late age of maturity, long gestation periods and low reproduction numbers.

Some steps to overcome fear and anxiety

I don’t claim to be an expert in this area, but I do have some experience about overcoming anxiety, particularly as a scuba diver and a scuba diving instructor. I have also liaised with a range of counsellors in this area and hopefully the below information helps:

Remind yourself the risk is low and concentrate on what you enjoy about the beach. I am very aware of the risks involved in diving, from drowning to decompression sickness and of course risks from sea life. The reality is however, my passion for scuba diving, witnessing the magnificent marine environment and the many ship wrecks far outweighs the level of risk scuba diving brings. This also leads to my next piece of advice.

Take steps to mitigate shark risks (see the Shark Safety Poster above.) Some of the things I like to do as a scuba diver is to have a mental check list of the things I have going for me to prevent an incident. Plenty of air is usually the first on the list! Also, I usually have with me a buddy who can assist with any issues. I know my scuba diving equipment is working properly – so already, I’ve started mitigating some of the risks associated with diving. The same can be said with shark risk.

Acknowledge your anxiety and then chose not to let your fear hold you back. This one is a big one for me. I’m not going to say that I have always felt 100% confident in the water, because it’s not true. There have been times that I have felt extremely uncomfortable and have even cancelled some dives, because I let my fear and anxiety hold me back. I would then listen to all the stories of the wonderful adventures my fellow divers had while I let my fear overcome me. These days, I am much more able to say, yes, I’m anxious, but I’ve taken precautions and …. OH MY GOSH, LOOK AT THAT WHALE SHARK!

Parents of anxious children should limit graphic images of sharks and suggest they visualise friendly or funny sharks as well as providing reassurance to them. 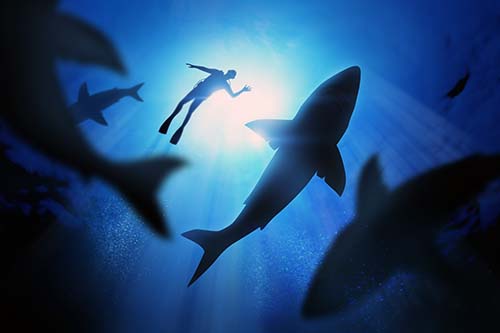