In the wake of the recent landmark judgment by the International Court of Justice, ruling that all Antarctic whaling permits be rescinded, the Institute of Cetacean Research (ICR) has delivered their proposal [here in after ‘The Proposal’] for the 2014/15 austral summer season:

The abstract of The Proposal calls for a non-lethal sight surveying, including distance/angle estimation experiments, photo identification and biopsy skin sampling. Interestingly, the data collection methods proposed are many of the same non-lethal methods that have been proposed by the International Whaling Commission Scientific Committee as scientific methods that would achieve the same data that the ICR has purported to have been collecting through the method of firing explosive tipped harpoons into the backs of threatened and endangered whales; adding further critique to the legitimacy of past so-called research expeditions. 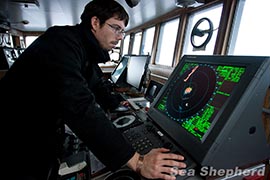 File photo: Captain Peter Hammarstedt on the bridge of the Bob Barker in 2013  Photo: Glenn Lockitch What is clear from The Proposal is that four notorious whale poaching vessels will be utilized for the sighting, three of which are equipped with explosive harpoon cannons: the Yushin Maru, the Yushin Maru No. 2, the Yushin Maru No. 3; as well as the Shonan Maru No. 2. No mention is made of the factory ship that processes poached whales, the Nisshin Maru, which is not named in The Proposal although it is stated that “final decision on the option (number of research vessels) will be made before departure taking into account of the budget availability and logistics”.

While the ICR has publicly announced that no whales will be killed during the 2014/15 season, it has declared its intent to resume the slaughter of threatened, endangered and protected whales for the 2015/16 season.

Sea Shepherd is suspicious of the true intentions of the ICR’s proposal of sighting survey for the 2014/15 season and believes it to be criminal conspiracy to violate the ruling of the International Court of Justice. Survey data will undoubtedly be used to lay the foundation for future lethal whaling expeditions. 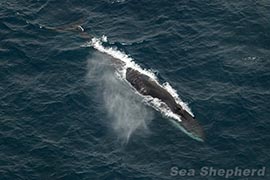 Fin Whale swimming free in the Southern Ocean. Fin Whales are one of a number of endangered species targeted for ‘non-lethal’ research by Japanese whalers. Photo: Eliza Muirhead Collecting information that will later be used to kill whales is criminal in the same way that reconnaissance of a bank leading up to a robbery is an offense against the law; so too is the ICR’s latest attempt to disguise market research as scientific research.

Sea Shepherd Australia will have ocean-going assets on site in the Southern Ocean Whale Sanctuary in order to monitor the ICR on their so-called sighting survey.

Sea Shepherd calls on the Australian Government, who brought the case against the Government of Japan to the International Court of Justice, to also monitor the Japanese whale poaching fleet, using both sea and air assets.

Should there be an absence of Australian law enforcement then Sea Shepherd Australia will intervene to shut down any suspected whale poaching operation in order to uphold Australian and international law protecting cetaceans.

During the 2013/14 whaling season, Sea Shepherd directly saved the lives of 784 whales through relentless intervention. If the ICR plans to violate the recent ruling of the ICJ, then Sea Shepherd will once again fill the law enforcement vacuum that exists between the making of law and its implementation.