Sea Shepherd has received consultation notes from 23 stakeholders regarding the drum line policy and only one organization, the Margaret River Board Riders Club were in complete favor of the policy. 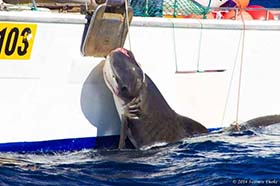 Shark-caught-and-killed-in-south-west Description: Tiger shark caught and killed in South-West. Photo: Sammie ThakeThe Western Australian drum line policy captured Sea Shepherd’s attention after the government announced that it would be dropping the buoys right outside Sea Shepherd’s offices in Cottesloe in December 2013. Since then, Sea Shepherd has been working hard to shine a light on the flaws of the program, which has included taking legal action against the WA Government, monitoring the program with Bruce the Rib, and applying for a handful of freedom of information requests.

One particular area of interest in the drum line policy for Sea Shepherd, was the lack of community consultation and what appeared to be a “cherry-picking” of the organisations which the Western Australian government sought feedback. As a result, Sea Shepherd applied for further information about the consultation through a freedom on information request, working with the Environmental Defenders Office of Western Australia. 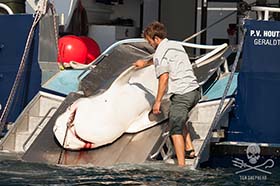 Tiger Shark Killed in Perth metropolitan region. Photo: Tim WattersSome organisations requested to be consulted with after the policy was announced on Tuesday 10 December 2013. The Shire of Augusta-Margaret River for example wrote to the Department of Fisheries on the 11th December, requesting that they be invited to put in a submission relating to the “Government Review of Imminent Threat Policy (Sharks)” citing their concern that they “are currently reviewing local procedures [and] it may be prudent to gain information from ALL organisations involved in this area.

The Department of Fisheries responded stating that the Shire “be assured that the State Government intends to liaise with and consult with all Local Government Areas throughout the process of implementation of the Shark Hazard Mitigation Policy.” This however did not occur and Sea Shepherd is aware that at no stage was the Shire consulted with regarding the drum line policy.

Additionally, the WA Shark Fishing Association which had already publicly voiced their concern about the lack of consultation, wrote a scathing email to the Department of Fisheries on the 30 December (20 days after the announcement of the policy) stating that “We expressed our concerns at our AGM in September about the lack of communication between WAFIC (WA Fishing Industry Council), the fishery dept and industry, this has proven to be true.” The following day, the association sent an email to the Department of Premier and Cabinet listing a number of concerns with the tender, with the first issue being the “lack of consultation and input into the shark mitigation plan” signing off by stating that the “industry members do not support the current tender as it is now.” But they were not alone in realizing that their comments were too late.

Unbudgeted costs, the creation of new local laws, the lack of clarity and major risk concerns such as “a party pursuing for damages” were all raised by the City of Bunbry.

“The Department should call urgent meetings with all stakeholders (the Department, impacted local governments, WAPol, SLSWA) with the view to developing agreement on policy and management arrangements” the City urged, however, this fell on deaf ears, as the policy was announced the next day. 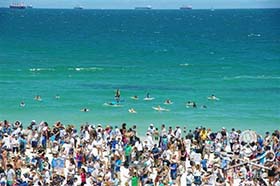 There were, among 23 stakeholders, only one organization that supported the policy without raising any concerns, and that is the Margaret River Boardriders Club.

From ALL the consultation undertaken with the WA Government, the Margaret River Boardriders Club is the ONLY organization to have raised concerns about local businesses suffering from negative shark interactions, a key reason why the WA Government stated they were rolling out the policy and why Federal Environment Minister, Greg Hunt provided an exemption to the Environment Protection and Biodiversity Conservation Act to kill the protected white shark.

This, in conjunction with the WA Governments own Market Force survey which showed over 80% of West Australians are against the killing of sharks, once again proves irrefutably that WA Premier, Colin Barnett’s “silent majority” simply does not and has not ever existed.

* These findings would not be possible without the tireless pro bono work of Patrick Pearlman and The Environmental Defenders Office (EDO) of WA, who run off the smell of an oily rag. As we live in a world where Governments are constantly attacking humanities last natural wild places, our life support systems in the name of greed and so called “progress”, the EDO is really our last line of defence. However with the recent cut in funding by the Abbott Liberal Government to the EDO, Sea Shepherd Australia is encouraging people wanting to help EDOWA to donate here.