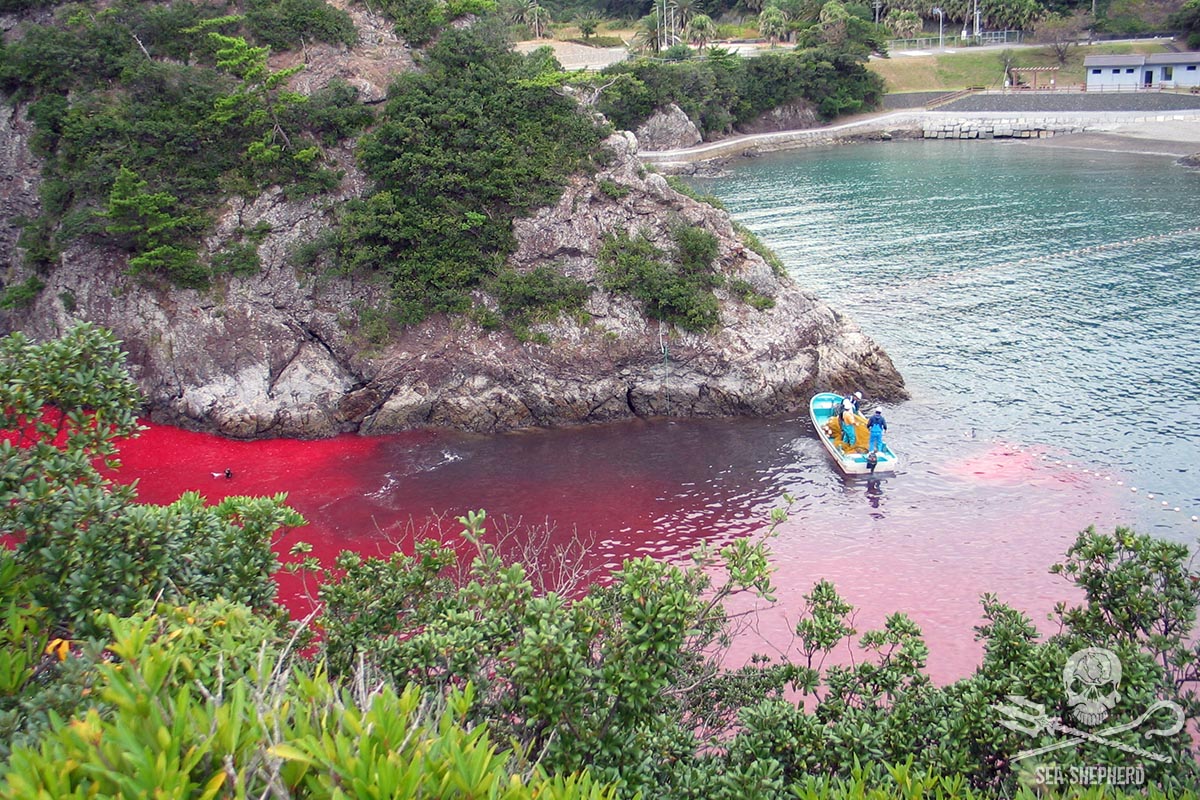 The bloody killing cove in TaijiSince the early Sixties, an insidious trade of intelligent, self-aware, sentient beings has been growing like a malignant cancer within human society. It is a slave trade that has been the cause of unimaginable misery and has claimed the lives of thousands of dolphins. This cruel industry has spread across Europe and Asia with hundreds of marine aquariums operating, many of them with grossly inadequate facilities.

Sea Shepherd has been documenting and opposing the dreadful slaughter and capture of dolphins in Taiji, Japan since 2003. In the beginning Sea Shepherd cut nets and freed 16 pilot whales back in October 2003, an action that sent two volunteers to jail for over a month. Sea Shepherd brought the story to the world’s media with headline stories and coverage on CNN...but the killing continued.

One of the first members of the 2003 Taiji crew was Ric O’Barry, who with Louie Psihoyos made an academy award winning film called 'The Cove' in 2009. The publicity was incredible...but the killing continued.

In 2010, Sea Shepherd established the Cove Guardians to monitor, film and live stream the slaughter from the 1st September until 1st March every year with hundreds of volunteers participating. Each year the campaign became tougher as Japanese authorities intervened with more laws and restrictions...and the killing continued.

Japan responded in 2014 by denying entry to our Cove Guardian veterans. Sea Shepherd responded with hundreds of new Cove Guardians from around the world...but the killing continued.

This year Japan has demonstrated that they are willing to subvert freedom with the passing of new draconian laws to protect their dolphin and whale killers. Some of these laws appear to have been contrived to target Sea Shepherd's Cove Guardians with ludicrous authoritarian criminal and terrorism offences. Sea Shepherd cannot in good conscience send others into a situation where their freedom and rights are threatened, especially since there would be no progress to be secured by our volunteers being detained and prosecuted in Japan's kangaroo courts. Other groups may be able to continue to monitor Taiji without consequences and we wish them the best of luck and hope they are not persecuted as our volunteers have been in recent years.

Sun Tzu wrote the following in The Art of War: Be like water, avoid what is strong and strike what is weak. There can be no constant conditions. Tactics must evolve.

We have witnessed the power of films like 'Blackfish' which sent SeaWorld's attendance and share prices plummeting as well as the failure of expansion plans by marine aquariums in Vancouver and California. These institutions have no conscience and we have discovered we cannot appeal to them on ethical grounds. They pay attention only to their shareholders and to red ink on their ledger books.

Sea Shepherd now intends to focus on the market for the wild dolphins that are traded to marine aquariums. Our lawsuit and political moves against Marine Land in Antibes, France has already struck a major blow to the captivity industry there with the introduction of new legislation. Mexico City has just banned dolphin captivity, there are new protests around the world against captive facilities and the anti-captivity movement continues to grow stronger. We need to build on this, to reach families with the message that dolphin captivity is an evil slave trade that must be abolished. Our goal must be to make the purchase of a dolphinarium ticket socially and morally unacceptable. 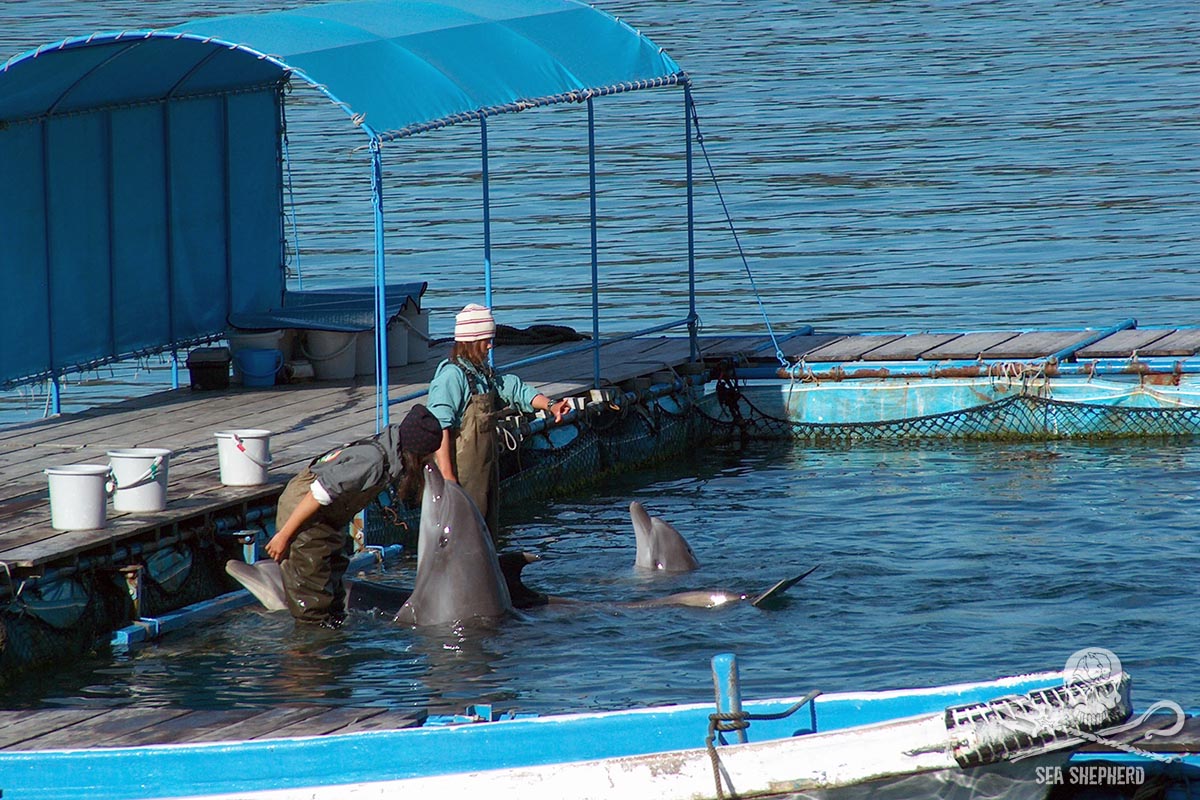 Captive dolphins in TaijiDolphin killers profit from sales to marine entertainment facilities, and these marine facilities profit from the public who watch their shows or pay to swim with dolphins. We need to speak their language and that language is money. We need to recruit celebrities to speak out against these facilities and we should focus on investigating the marine aquariums that directly purchase wild caught dolphins and call them out by name for what they are - profiteering slave traders and torturers. We should be open to new and fresh ideas including the legal covert use of technology. After all these years in Japan Sea Shepherd has a wealth of video footage and photographs. We should use that footage to set up a Japanese website to provide our documentation to the Japanese public.

What do the Japanese understand? They understand money and they understand loss of face. We can actually save dolphins if we strike them economically, shame them and destroy the market for dolphins. We need to place ourselves beyond Japan’s new laws. Outside of Japan they have no control over us. Inside Japan we are at their mercy and nothing will be gained by throwing ourselves onto their spears. Most of all we should encourage a boycott of the 2020 Summer Olympics in Tokyo until Japan ends all whale and dolphin hunting.

Our new campaign will be a Global campaign with all Sea Shepherd groups participating.

Some people will undoubtedly criticize this change in tactics, but our concern must be for what works. Sea Shepherd represents the dolphins. Documenting their murders while helplessly being unable to intervene should never be the Sea Shepherd position. 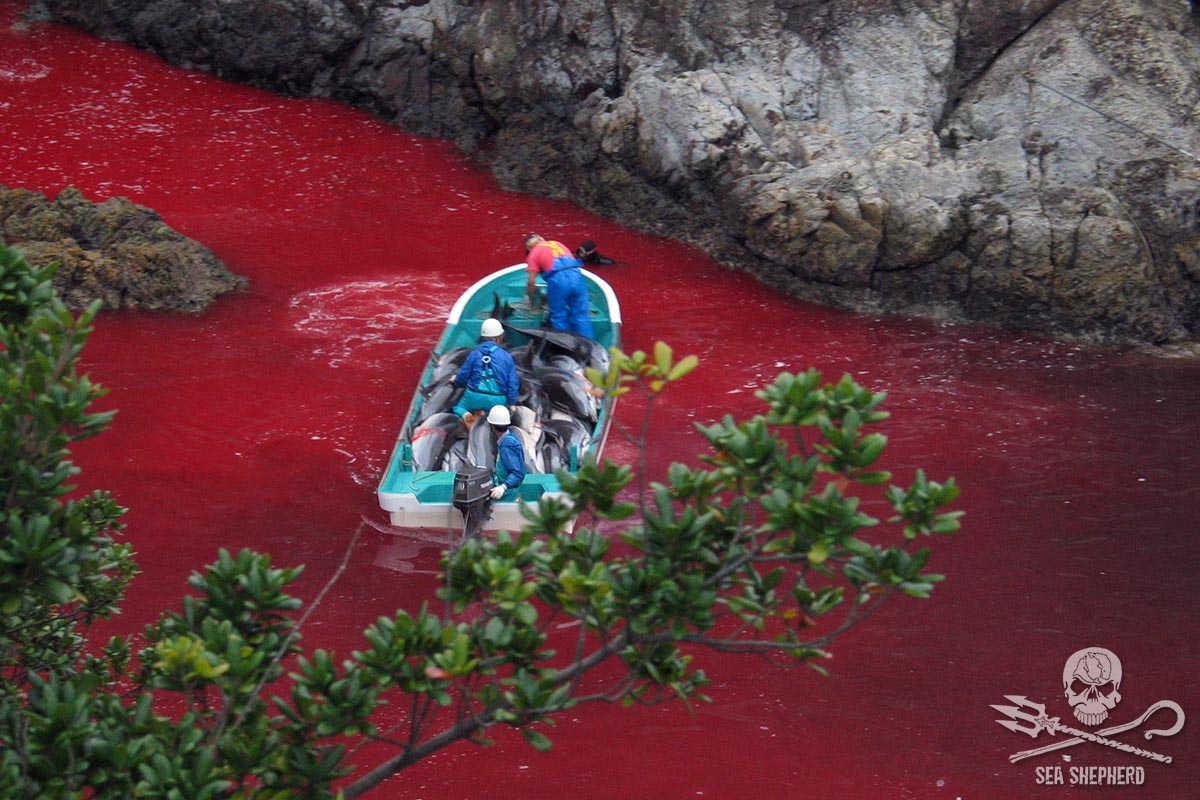 The bloody cove of Taiji