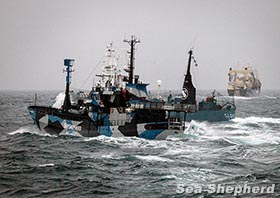 Yushin takes Bob Barker Away from Nisshin Maru during Operation RelentlessJapan once again declares war on the whales of the Southern Ocean Whale Sanctuary in defiance of the International Court of Justice.

The U.S. Federal Court (9th District) continues to grant a temporary injunction against intervention by Sea Shepherd USA and myself despite the fact that the ICJ has declared Japanese "research whaling" to be illegal.

Thus Sea Shepherd and I are compelled by law to not intervene BUT Sea Shepherd everywhere else (outside of the USA) can lawfully intervene. And Sea Shepherd Global will do so and they will do so with all the determination, courage and resourcefulness they can muster.

Read more about this on Yahoo News