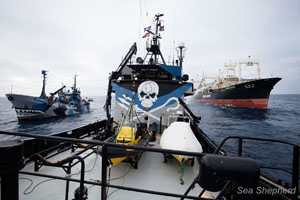 The entire Japanese whaling fleet is now north of sixty degrees and out of the Southern Ocean Whale Sanctuary.

The Panamanian-flagged Korean-owned fuel tanker Sun Laurel, traveling with the Yushin Maru No. 3 and flanked by the Sea Shepherd ship Sam Simon, is 120 nautical miles north of the Nisshin Maru and is continuing northward at eleven knots.

Is whaling over for the season?  We are not positive but we are 80% sure that it may be over.

Sea Shepherd will not intervene against any legal transfer of fuel between the Nisshin Maru and the Sun Laurel above sixty degrees South but the Sun Laurel is over 120 miles to the North and still moving northward at 11 knots. It would take at least 48 hours to rendezvous with the Sun Laurel to refuel and another four days to return to the whaling area. This would leave about a week to kill whales and with the weather quickly deteriorating it would hardly be worth the effort.

How many whales have been killed? Sea Shepherd can only confirm the death of two Minke whales. Some whales could have been taken on the run westward; the Nisshin Maru and the Yushin Maru No. 2 had two days to whale unobstructed until the Sea Shepherd ships caught up with them.

My conservative estimate of the number of whales killed this year is no more than 75. It could be much lower but certainly not higher. Last year I predicted the whalers would take 30% of their kill quota. The actual kill was 26%.

Although Operation Zero Tolerance did not realize zero kills, this campaign will see the lowest take by the Japanese whaling fleet in the entire history of their Antarctic whale hunts.

The Sea Shepherd Conservation Society campaign led by Sea Shepherd Australia has been enormously successful and the crew of all three Sea Shepherd ships are satisfied with what has been achieved this season.

All three Sea Shepherd ships will continue to follow the whaling fleet north to ensure that they do not return to kill whales. 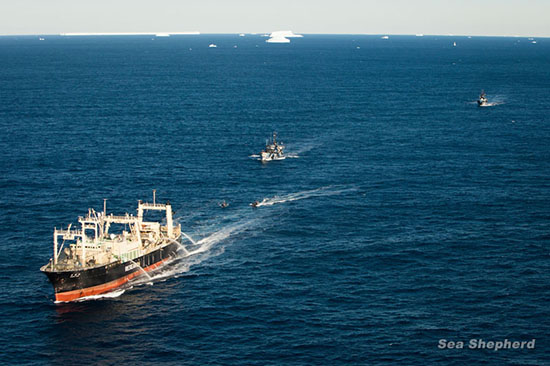