Sea Shepherd Australia thanks Bob Brown, as he steps down as chairman 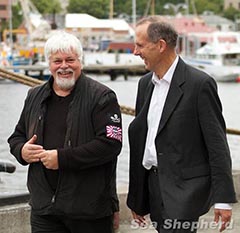 Bob Brown with Sea Shepherd founder Paul Watson in Hobart prior to the commencement of 2010/11 Antarctic campaignAfter leading two Antarctic campaigns and serving as Sea Shepherd Australia's chairman for 2 years, Bob Brown has decided to step down to spend more time with his partner, some time in the wild and his ongoing conservation work with the Bob Brown Foundation.

Sea Shepherd Australia director Jeff Hansen said it was an honour to have Mr Brown serve as chairman. "We're definitely sad to see him go but we're also very happy that he can finally have a bit of time with his partner Paul.

New chairman Cate Faehrmann said, "I am incredibly honoured to be taking over from Bob Brown as Chair of Sea Shepherd Australia at such an important time for marine conservation. We have just won the long fight against the Japanese whalers in the Antarctic Ocean in part due to the incredible courage and persistence of the men and women who crew our ships in those dangerous waters each year.

Now I'm looking forward to supporting Sea Shepherd as we take action against other threats to our oceans and marine life, including ramping up our campaign against Colin Barnett's senseless and cruel shark cull," said Ms Faehrmann.

Sea Shepherd Australia's new Chairman, Cate Faerhmann“I have followed the career of Bob Brown from the early Eighties when he championed the preservation of the Franklin River in Tasmania. I followed his career as the leader of the Australian Greens and as a Senator in the Australian Federal government.

Politician yes, but first and foremost one of the greatest environmental heroes in the history of Australia. He is to Australia what John Muir was, and is to America. He is also the most caring, concerned, honest and hands-on politician I have ever met,” said Sea Shepherd founder, Captain Paul Watson.

“Now with the decision by the International Court of Justice condemning Japanese whaling in the Southern Ocean, Bob Brown at last has a chance for a well-deserved retirement and has stepped down as Chairman for Sea Shepherd Australia.

He will continue to chair the Sea Shepherd Australia Advisory Board and we are damn proud to continue to have him onboard.

And I have been proud, honoured and privileged to have Bob Brown as a friend, advisor, leader and inspiration,” said Captain Watson. 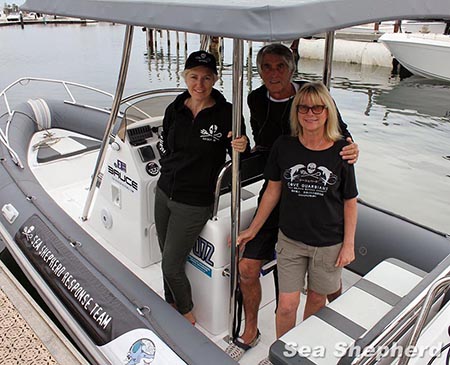