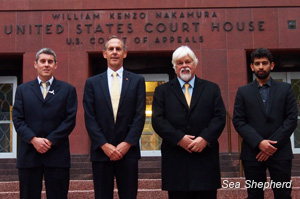 Managing Director Jeff Hansen, Sea Shepherd Australia Chairman Dr. Bob Brown, Sea Shepherd Conservation Society Founder Captain Paul Watson and Steve Irwin Captain Siddharth Chakravarty after the close of trial on the steps of the U.S Court of Appeals in Seattle, USAOn December 17th, 2012, with an unprecedented procedure, the 9th Circuit District Court handed out an injunction to Sea Shepherd USA and Paul Watson stating that they were not allowed to be any closer than 500 yards of the operations of the Japanese whale poachers, otherwise known as the Institute for Cetacean "so called" Research (ICR). As a result, in respecting the law and to comply with the injunction, Sea Shepherd USA backed down from administering Operation Zero Tolerance and Captain Paul Watson, stepped down as Expedition Leader and stepped down from the boards of Sea Shepherd Australia and Sea Shepherd USA.

At the time the injunction was handed out Captain Watson was on board the Steve Irwin and could not come to shore because of a politically motivated Interpol arrest notice by Costa Rica and Japan. The campaign was under way with the Sea Shepherd fleet heading south and all ship control was in the hands of the captains. Many Australians were amazed that the 9th Circuit did not recognise Australia's claim in Antarctica. Japan's whaling was already deemed illegal by the Australian Federal Court. After a board meeting on December 27th, 2012, Sea Shepherd Australia announced that it would be managing/administering the campaign and that Bob Brown and myself would be leading Operation Zero Tolerance.

Last summer's attack on the whales led to one of the most aggressive and violent campaigns that Sea Shepherd has ever witnessed at the hands of the whale poachers from Japan, with a blatant disregard for life from the Captain of the Nisshin Maru, as he proceeded to ram each of Sea Shepherd's big ships, the Bob Barker, Steve Irwin and Sam Simon. The Bob Barker was almost sunk. The Nisshin Maru only backed off and left the scene when the Bob Barker put out a mayday distress call. Nevertheless it was Sea Shepherd's most successful campaign to date with Japan only taking home less than ten percent of their quota and 932 magnificent whales still swimming in our wondrous oceans.  However it came at a cost with the whale poachers from Japan lodging contempt of court proceedings against our friends at Sea Shepherd USA and Captain Watson.

Sea Shepherd Australia was asked to testify in defence of Sea Shepherd USA and Captain Watson and as a result Bob Brown, Captain Chakravarty and I went over to Seattle, arriving on Saturday 2nd of November. Prior to our arrival there had been over a week of testifying by Sea Shepherd USA board members and staff and Operation Zero Tolerance Captains. However, our role was to paint a picture to the court of just how big the scale of our operation and the support for it is in Australia.

Captain Siddharth Chakravarty stated "As I was being cross-examined by the ICR Counsel, I looked past at the Japanese representatives from the ICR and KSS and the one thing that was evident from their bored expressions is that they are dead to the cause of conservation. Bob Brown spoke very passionately about the love that Australians had for the whales, but none of his comments evoked a response. I had also hoped to have sat in and confronted Mr. Ogawa, Captain of the Nisshin Maru, but he remained absent during the trial. Apparently he needs to get the Nisshin Maru ready for the whaling season ahead. Considering that the fridge flats of the NM will remain unfilled again, I can't see what he is getting ready for. I am confident that he did not want to actually face Captain Paul Watson, Leaders Bob Brown and Jeff Hansen or me, but was content to sit behind the wheel of his giant vessel and run the SS ships down. "

Captain Chakravarty said " One thing that I will take home from this experience is that Sea Shepherd is a movement that the ICR and the whalers cannot stop. SSCS US and Captain Paul Watson have been forced to step away, but what the Japanese Whaler's have been unable to do is shut down intervention in the Southern Ocean Whale Sanctuary. The Sea Shepherd ships are repaired and equipped with the dedication, passion and unflinching courage of volunteers from around the world. I return to Australia proud that I will be one of those people heading down South on Operation Relentless."

I explained to the appeals court how over the years, Sea Shepherd Australia has been growing from strength to strength in terms of numbers of ground support chapters , volunteers and support from the public translating into more funds. This meant that  at the time of the injunction, Sea Shepherd Australia was in fact in a position to lead and manage the Antarctic whale defence campaigns. Especially given Bob Brown and I, had just led Sea Shepherd Australia's first big campaign in Operation Kimberley Miinimbi. I also detailed how skilled tradespeople would work for weeks at times, to get our ships ready for campaign and only want a crew T-shirt as payment, how mums and dads would come down to the ships with their kids and deliver entire boot loads of fresh produce to the crew. The Sea Shepherd Fleet had been maintained, prepared and provisioned for the majority of the Antarctic whale defence campaigns in Australia and it was clear that the campaigns would have not been possible without the overwhelming support of the Australian people. So much so, that for the first time in Sea Shepherd's history, we now have a ships operations base at Seaworks, Williamstown in Melbourne.

Dr. Bob Brown explained to the appeals court what a cruel, bloody and disgusting business is involved in projecting grenade-tipped harpoons into the spines of defenceless whales. The court heard how this happens to mothers in front of calves and calves in front of mothers. Along with myself, he made it absolutely clear that Sea Shepherd Australia controlled Operation Zero Tolerance last summer and will be pursuing the Japanese whale killers if they come south in Operation Relentless in the coming months.

If Japan thought that by targeting Sea Shepherd USA that they would shut down the Antarctic whale defence campaigns, they were sorely mistaken. Sea Shepherd is a global movement by the various separate Sea Shepherd entities around the world in unison with the mums, dads and children that want to see whales in our life giving oceans, that understand the simple fact, that if the whales perish and the oceans die, we, humanity dies. The ICR can target Sea Shepherd organisations around the world, but they will never stop the movement, the movement to save life, to save the whales, to save the Earth. No amount of money, no amount of lawyers will ever stop this movement to save our oceans, to save this wondrous beautiful place that we call Earth, our home.

With up to eighty percent of every breath we mammals breathe coming from our oceans, Sea Shepherd believe that the battle to save the oceans is the most important thing humanity should be focusing on.

When ICR's lawyer, Mr. Nupert asked both Bob Brown and myself if we believed Japan's whaling to be illegal, the answer was an irrefutable "Yes". For the ICR is in contempt of the HSI (Humane Society International) 2008 Federal court ruling, banning the slaughter of whales in the Australian Whale Sanctuary. Each year the whale poachers go down to kill and butcher whales in the Australian Whale Sanctuary they are breaking Australian Federal Law. Sea Shepherd Australia would very much like to see how far the ICR vessels would get coming into an Australian port and how far they would get coming after Sea Shepherd Australia in the Australian courts, a court system they are in contempt of. Both Bob Brown and my message to Japan's ICR is, "please do".

It was a pleasant surprise to see Paul Watson in fine form after more than a year at sea. Captain Paul Watson was the last person to take the stand on Wednesday and he detailed the selfless sacrifices he has had to make for the whales all these years including more recently, stepping down from the organisation he founded in 1977, losing any income, no phone, no health insurance. He could have also told the court that he was unable to go to his brother's funeral or to see his daughter and grand daughter for the past 15 months. Captain Watson also reinforced his utmost respect for the law and knew that if he remained as Expedition Leader he could not comply with the injunction, for the pure and simple fact that he could not control the actions of the captains of the other vessels, especially if a whale was in immediate danger from the whale poachers, because at the end of the day, the person in charge of each ship, is its Captain.

When the injunction was handed out against Sea Shepherd USA and Paul Watson, Sea Shepherd Australia's hearts went out to our fellow friends and were sympathetic to what they were going through. However, we are answerable to our clients, the whales and had to take steps to needed to proceed with the campaign or 1035 whales would have ended up in boxes ready for the market in Japan. We are also answerable to our donors and supporters in Australia and around the world (outside the USA) who want to see an end to whaling, for there is no place for this cruel and barbaric slaughter in the 21st century.

Both Bob Brown and I felt it was a great honour to defend Captain Paul Watson and Sea Shepherd USA and we know that if the tables were turned, they would do the same for us and Sea Shepherd Australia.

The next steps are that briefings will be filed by attorneys for both sides. The Commissioner will review the briefings and issue his recommendations to the three member panel of judges of the Ninth Circuit Court. A decision from the panel might be expected in the next several weeks.

We welcome your support in anyway to this honourable defence of the whales. 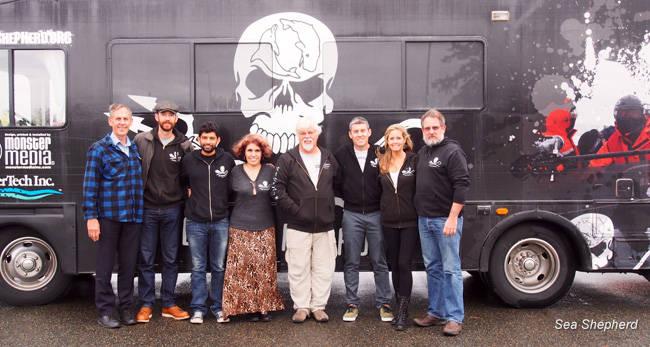 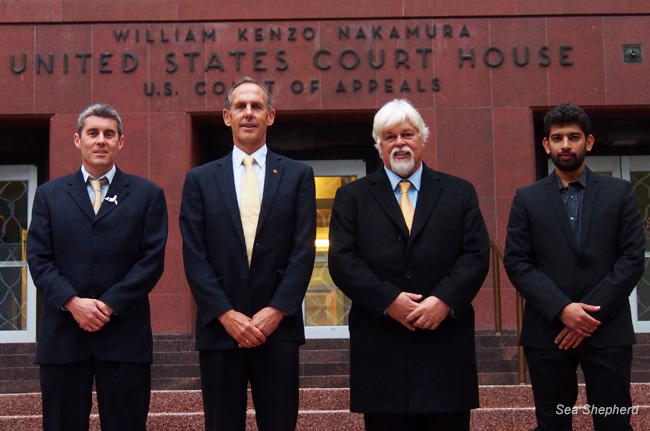