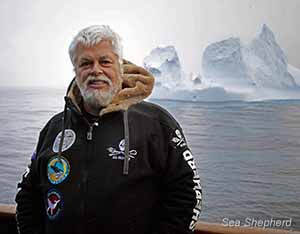 Paul Watson, acting as an observer, during Operation Zero Tolerance - photo: Tim WattersThe final decision of the International Court of Justice in The Hague concerning Australia’s case against Japanese whaling in the Southern Ocean Whale Sanctuary could have dire consequences far beyond the issue of whaling.

Japan is claiming they do not need to justify the “scientific research” and that the ICJ has no jurisdiction over their activities in international waters. They are claiming that this is a cultural issue and that the world has no right to dictate to Japan about what they refer to as their “food culture.”

Japan knows full well that they will not be able to justify the slaughter of whales as science.

They will argue cultural right, sovereignty, freedom of the sea and they will claim that no other nation or international body has the right to challenge their exploitation of the commons.

The old facade of “scientific whaling” is now morphing into the new facades of “cultural whaling,” hinting that any opposition to this new definition will be viewed as racism and cultural insensitivity.

If Japan prevails with this argument it will have dire consequences not just for whales, but for all of the living ocean. It will open the floodgates to demands by other nations to exercise their “rights” to exploit marine species and resources.

We have seen what unrestricted exploitation has done to many species. The commercial collapse of the cod fishery on the Grand Banks of Newfoundland is a case in point. The nations fishing cod set their own individual quotas without regard to the quotas set by other nations.

It is called the “Tragedy of the Commons”. The Spanish fleets knew they were taking an excess of cod and that the numbers were declining but their position was that if they did not take the fish, Canada, Russia, Portugal or Cuba and others would extract their “take” nonetheless. In the end, they killed the golden goose in their quest to get the golden eggs.

The Europeans and Africans are doing the same today with Bluefish tuna and European and Asian commercial fisheries are plundering the coasts of Africa in a piratical frenzy to extract the most fish as quickly as possible.

Some ninety million sharks are destroyed each year primarily for their fins to supply the “cultural” demands of China.

As one fishery collapses, another species is targeted for exploitation.

I used to joke that one day we will be reduced to eating jellyfish and then a few years ago at an event sponsored by the Vancouver Aquarium I witnessed chefs making a jellyfish salad.

There is no species in the ocean it seems that is immune to human predation. Industry is harvesting plankton as a cheap protein source of feed for livestock. There are markets for sea cucumbers, sea slugs, shark fins, turtle eggs and what humans don’t eat they exploit for amusement like the live capture of tens of millions of reef fish each year for the home aquarium industry.

Humanity is eating the oceans alive

Compounding this excess is the fact that some 40% of the marine life taken from the sea is not eaten directly by humans but instead is fed to livestock like pigs, chicken, domestic salmon, cats and dogs. The slaughter of endangered Fin whales in Iceland is now being done to provide dog food for the Japanese pet industry. Chickens are now eating more fish than puffins and albatross. Pigs are now eating more fish than sharks and tuna. We are feeding tuna and salmon to cats. 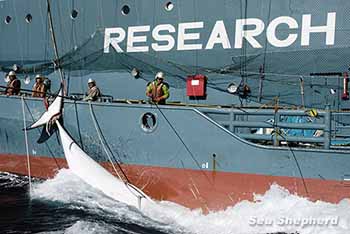 Slaughtered Minke whale, Japan now calls this 'Cultural Whaling'. photo: Glenn LockitchEven the over-exploitation of seaweed is having a devastating effect as it removes this important source of nutrients from the marine eco-systems.

And in return for what we take we dump hundreds of millions of tons of plastic, oil, chemicals and nuclear waste into the seas.

This is the insanity of humanity that has been laying waste to our oceans for decades and this madness will be accelerated if Japan prevails with their arguments at The Hague.

For years Sea Shepherd crews have witnessed the operations of the Japanese whaling fleet in the Southern Ocean Whale Sanctuary. What we have witnessed is not science, it is a commercial slaughter and meat packing operation. In January of this year, a Minke whale was brought onboard and “processed” within forty minutes. There were no scientists that could be observed on deck, only slaughterhouse workers focused on the cutting up of the whale. The entire operation was indistinguishable from the blatantly commercial processing of fin whales by Iceland.

There is the possibility also that if Japan wins their case in The Hague that the guise of “scientific whaling” will be tossed out completely and Japan will openly proclaim their “right” to take whatever they wish be it whales, tuna, or any other species.

Sea Shepherd Australia is prepared to return to the Southern Ocean to once again, and for the tenth year defend the endangered and protected whales of the Southern Ocean Whale Sanctuary and the ships will go south if Japan decides to go south.

“We will not abandon the whales,” said Sea Shepherd Australia director Jeff Hansen. “Japan has been killing whales in an internationally established whale sanctuary and we will defend that sanctuary. The world cannot slap the words “whale sanctuary” onto a chart and proclaim it protected. Protection implies enforcement and as shepherds we intend to defend our flock. These are not Japan’s whales to kill, it is our global common cause to protect them.”

The Sea Shepherd fleet is presently in Williamstown near Melbourne. Sea Shepherd has two reserved seats in the courtroom of the ICJ in the Hague. The Southern Ocean for 2013/2014 is called Operation Relentless and is a project organized and led by Sea Shepherd Australia under the direction of Jeff Hansen and Bob Brown.