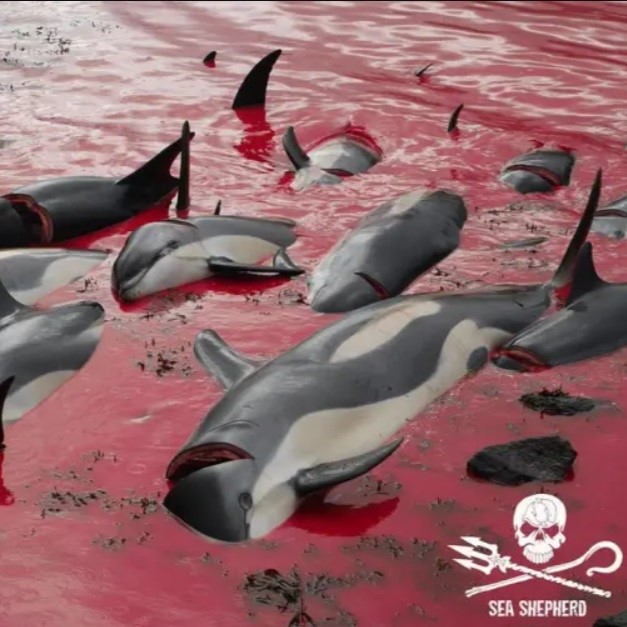 After over 9 months of deliberations and facing a UK parliamentary debate - the Faroe Islands parliament announced that an annual 'quota' of 500 Atlantic White Sided Dolphins will be imposed for the next two years after national and international outrage over the massacre of 1428 Atlantic white sided dolphins in Skalafjordur on the 12th of September 2021.

This 'quota' of 500 dolphins is totally meaningless when you look more closely at the statistics and the detail.

Had there already been a quota of 500 per year, it could be said that the massacre of 1428 in a single hunt may not have happened. However, there seems to be no stated penalty or potential prosecution for exceeding this new quota. Who, if anyone would be prosecuted or fined should over 500 be killed in the next two years? If over 500 were killed in a year, then those responsible would no doubt make the claim they did not realise that the pod was so large until it was ‘too late to call off the hunt’.

Even if you include the unprecedented killing of the 1428 -  the average number of Atlantic white sided dolphins killed each year (using data from the last 40 years) is 193 per year - which is far lower than the new quota level of 500. If you remove the 1428 from the statistics, then the average killed each year was over the other 39 years of data is 161 Atlantic white sided dolphins.

This new 'quota' is meaningless for dolphins in the long run and has only hastily been announced to deceive both politicians and the press in the face of continued outrage over the killing of dolphins in the Faroe Islands.

Even more shocking is that in a Faroese article at: https://bit.ly/3Q778YG it says that while the 500 dolphins limit is for the next 2 years - the Faroese government seems to say the actual future quota should be 825 dolphins per year!

This exposes the Faroese Government as having a long-term plan to kill even more Atlantic white sided dolphins!

This all is forgetting the long suffering, and oft ignored long finned pilot whales (another dolphin species) which will continue to be killed for sport with no season and no limitations - and the bottlenose dolphins of which 99 were killed today (29th July 2022) in the second largest hunt of that species in Faroese history.

The driving of cetaceans is proven to cause disorientation and distress.
The Faroese who take part are unprofessional and cause great suffering.
The meat is heavily contaminated, would not pass basic food safety testing.
The hunts have not been ‘traditional’ since they started using powerboats and Jet Skis.
And none of it is even needed to feed the wealthy Faroese population anyway!

The hunting of pilot whales and dolphins in the Faroe Islands needs to stop.