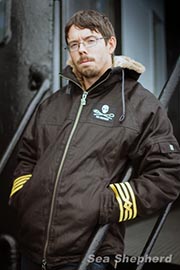 Captain Peter Hammarstedt, The Bob Barker  photo: Simon AgerAs Operation Relentless enters the second week of March, the days left for the Japanese whale poaching fleet are numbered. The never-night of the Antarctic Summer is a distant memory; darkness spreads as quickly as the rate of the Ross Sea beginning to once again freeze over. Whale sightings are less frequent, as the survivors of the latest season of butchery begin their annual sojourn back to the coast of Australia. As the fall migration of whales begin, the survivors are many due to the intervention of the only navy mobilized to their defense – the Sea Shepherd Fleet.

Upon reflection, it is clear that in order to avoid a diplomatic incident with Australia on the eve of a court ruling by the International Court of Justice in The Hague, the Japanese whale poaching fleet have restricted themselves to whaling in the Ross Sea Dependency.

Operation Relentless is, and has been, the Battle for the Ross Sea.

Two times the Japanese whale poaching fleet attempted to enter the Ross Sea and both times they were found on the day that they tried to resume their illegal whaling operations. Sea Shepherd is confident of this based on weather, and based on where the factory whaling ship was found.

Operation Relentless was never going to be the campaign where the Sea Shepherd Fleet could stay on the factory whaling ship’s slipway for the entire whaling season. Previous campaigns have shown the whale poachers that Sea Shepherd makes the transfer of dead whales and the unlawful refueling at sea impossible. Therefore, we knew that we were likely to be attacked and attacked again as the Japanese whale poacher’s desperation increased.

Consequently, a day after the Appellate Commissioner with the Ninth Circuit Court of Appeals in Seattle issued his legal opinion that Sea Shepherd USA and Captain Paul Watson were not in contempt of the injunction issued against them last year, and nine days after the Sea Shepherd Fleet began blocking the Nisshin Maru’s slipway, the whale poachers began to launch unprovoked and aggressive attacks against The Steve Irwin and Bob Barker. The attacks were an unprecedented manifestation of a desperate and dying industry. 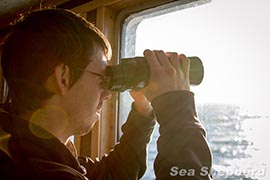 Captain Peter Hammarstedt, keeping watch in The Battle for the Ross Sea  photo: Simon AgerBut where we can’t defeat our adversary using physical strength, we will defeat them with courage and strategy. We will outwit the whale poachers at every opportunity because our Captains and Crew have the passion, creativity and incisiveness that the antiquated whale poaching industry does not have.

Four times the Sea Shepherd Fleet has located the Japanese factory whaling ship Nisshin Maru this season. It is an accomplishment unequalledon our previous nine Antarctic Whale Defense Campaigns. Three times the Nisshin Maru was found by The Steve Irwin’s helicopter just as they began their illegal whaling operations for the day.

The hull of The Bob Barker still bears the scars from the collision that occurred from the Yushin Maru No. 3 when they underestimated their distance, crossing my bow trailing steel cables.

When the Japanese harpoon ships attacked The Bob Barker in the middle of night, small boats teams, despite the danger, risked their lives to fend off the attack for ten hours in pitch darkness.

When the Yushin Maru and Yushin Maru No. 3 attacked The Bob Barker while the Sea Shepherd ship was still 40 nautical miles away from the Nisshin Maru, one of The Bob Barker small boats was crippled making valiant attempts to cut the steel cable that the harpoon ships were trailing with the intent to damage The Bob Barker’s rudder and propeller.

The attacks by the harpoon ships will come at a cost to the Government of Japan – the Japanese whale poachers have shown the world that they are indeed the thugs and criminals that Sea Shepherd has asserted them to be for years.

One of the strategies of war is to isolate one’s opponent. The incursion of the Yushin Maru No. 3 into the Australian Whale Sanctuary whilst pursuing The Bob Barker to Macquarie Island and the incursion of the Shonan Maru No. 2 into New Zealand waters whilst harassing The Steve Irwin have, in the words of the New Zealand Foreign Minister, come at a relationship cost. 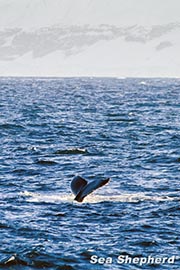 Sea Shepherd estimates a devastating season for the whalers, and a great year for the whales
photo: Marianna BaldoWe are defeating the Japanese whale poachers in the media war, we’re winning against them in every court battle, and in the diplomatic sphere the Government of Japan is without allies.

But most importantly, we are winning in the field, doing everything that we can with the resources that we have at our disposal, never compromising, always relentless.

The Sam Simon is now returning to Australia due to low fuel. The Steve Irwin is being tailed by the Yushin Maru No. 2, and The Bob Barker is being tailed by the Yushin Maru No. 3, meaning that until the imminent end of the whaling season, two-thirds of the harpoon ships are out of action. In the meanwhile, The Steve Irwin and The Bob Barker will continue to patrol the Ross Sea in the few areas of good weather that remain this late in the season, meaning that the Nisshin Maru will either have to come to us or be stuck in weather too terrible to poach whales.

All that matters at the end of the campaign is how many whales were saved by Sea Shepherd’s interventions. I am confident that when the sea spray has settled and swell has calmed, that we will have again delivered a devastatingly low kill season for the whale poachers; one where we will be able to measure our success by the number of whales that will soon be able to give birth to their calves in Australia’s warm waters because their warm blood did not spill into the icy waters of Antarctica.