When looking at the statistics relating to shark attacks in New South Wales, it is easy to see why, back in 1935, the Premier at the time, Bertram Stevens, felt it was necessary to do something to curb the amount of shark incidents. Since the mid-1800’s over 60 people had died from a shark bite in the state, due mainly to blood loss. So, without any huge advances in medical technology, mesh beach nets were approved as a two-year experiment.

By 1937 however, no Government funding for the nets had been made available, until Australia’s imminent 150th Anniversary celebration in Sydney on 26 January 1938, brought fears of a shark attack to state politicians.

It was only three months later, on 2 January 1938, that the first of 39* unwanted shark encounters at a netted beach in New South Wales took place, when Ernest Barker was thrown in the air, after a shark bumped his surf ski at Cronulla Beach. Shark nets had proven not to work, 24 days prior to the 150th Australian anniversary celebration! Despite this, the nets remained in place, until January 1943, when the nets were removed from Sydney beaches so that the fisheries vessels that were used to service them, could be used by the Americans in the Secondno World War.

NSW Premier William McKell stated shark nets provided a false sense of security in 1946This led to the then Premier of New South Wales, William McKell to make a statement in the Sydney Morning Herald that no Premier has dared to say since, despite scientific findings, that shark nets are “quite valueless.” McKell preferred alternative measures to shark nets, signing off on experimental shark repellents to be used in conjunction with shorter shark nets (152-meters long) in 1946, stating, that“if meshing alone were used, I fear it would prove to be of little value. Worse, it would possibly lull the public into a sense of false security, leading to diminished watchfulness and possibly to tragedy.” This was 69 years ago, and scientists continue to echo these sentiments today, to no avail.

But the change of Premier to James McGirr in February 1947, followed by three fatalities in each consecutive year, two in Newcastle, (one at a public lifesaving exhibition), led to shark nets being rolled out to the Newcastle and Illawarra regions in 1949 at 13 beaches. (There had been a spate of shark sightings around Wollongong in earlier years).

Frank Okulich (21) tragically died from a shark bite at a netted beach in Cronulla in 1951 Credit: Sydney Morning Herald - 7 Dec 1951Two years later, the failings of shark nets would again be proven, when in 1951, New South Wales recorded its worst year of shark encounters at netted beaches, with three separate incidents, including the fatality of local surf ski champion Frank Olkulich (21) who was fatality bitten at a Newcastle Beach called Merewether while treading water.

Despite this, shark nets continued to be touted as the best solution to reducing shark encounters in New South Wales, even as more incidents took place at netted beaches. In 1962, Queensland authorities must have had its doubts on the success of shark nets however, as they introduced 24 drum lines in addition to shark nets to the Gold Coast region.

New South Wales authorities continued on with its failed shark meshing programme (SMP) extending them in 1972 to nine additional beaches within the regions, after thirteen year old Raymond Short had his right leg severely bitten while body boarding at Coledale Beach by a 2m white shark in 1966. This is despite the fact that at the time, 14 unwanted shark encounters had occurred in the 19 years of shark meshing at netted beaches.

In 1972, a major review of the SMP took place. This was 35 years after the shark nets were initially installed in Sydney’s beaches, and 10 years after Queensland introduced drum lines to the Gold Coast region.

The review saw changes made to the netting program, that are current today, including the introduction of nets at an additional seven beaches in the regions where nets had already been installed, bottom-set nets instead of surface-set nets and a standardisation of the nets to 150-meters long and six-meters high set in waters 10-12meters deep. That is to say, there is generally a four-to-six-meter gap between the surface and the shark net at meshed beaches. 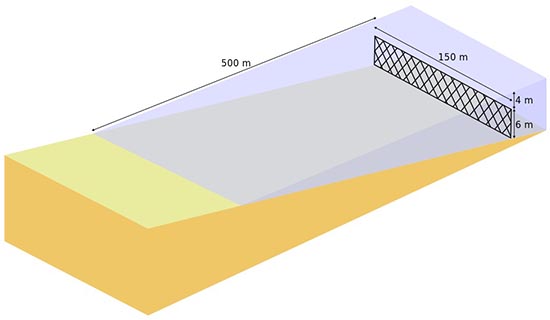 Shark nets are 150-meters long and six-meters high set in waters 10-12meters deep. That is to say, there is generally a four-to-six-meter gap between the surface and the shark net at meshed beaches. Credit: Wikipedia

Then in 1983 shark meshing at the 40 beaches that were then netted, was halted in the months of June and July for “economic reasons”[1]. It should be noted that being winter months, there are fewer people in the water in June and July, that there had only been two unwanted shark encounters in these month since 1937, that the number of sharks caught in the nets during these months were very low and whale protection had been a focus for Australia since 1979, so conservationists would have rejoiced at this decision; which would reduce the chances of whales being entrapped in the shark nets. However, the minor win for conservationists, was quashed in January 1987 when shark nets were installed in nine beaches along the Central Coast, taking the total number of netted beaches in New South Wales to 49. This was also the year that the four-term school year took place, which saw a reduction in beach attendances during May and August during what would have been school holidays. By 1989, again for economic reasons, shark nets were no longer installed between May and August.[2] This remains in place today and logically makes sense due to the colder months, the low risk of an unwanted shark encounters, and the whale migrations along the NSW coast during this time.

After removing the nets from the beaches in June and July in 1983 and then in May and August in 1989, there continued to no unwanted shark encounters during these months at netted beaches. Despite this, the pressure in parliament to increase the meshing program was intense in 1990 (despite no shark attacks that particular year.) In January 1991, New South Wales held an international shark conference at Taronga Zoo, Sydney where plans for a public discussion paper regarding the SMP were made. Prior to this discussion paper being released however, two additional beaches in the Central Coast were added to the netting programme in September 1992, taking the total number of netted beaches to 51, which is where it remains today.

The harshest of realities… 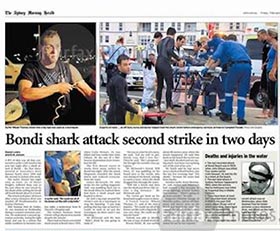 These two incidents took place just before the New South Wales Department of Industries publicly released its report into the meshing programme and the environmental impacts as part of amendments to the Shark Meshing Bill passed in November 2008. The report, detailed that from September 1990 to April 2008, there were 3,259 marine animals caught within the shark nets that were considered by-catch. These include 1,292 hammerhead sharks, 1,269 stingrays, 259 angel sharks, 107 port jacksons , 52 dolphins, 47 turtles, 40 thresher sharks, 15 grey nurse sharks (critically endangered and have been protected in New South Wales since 1984), six whales,[4] four seals (vulnerable and protected), a penguin (protected) and a dugong (protected). In addition 100 White Sharks (vulnerable and a protected species since 1999) were caught in these years. [See table below]

Despite accounting for a third of the catch, hammerhead sharks are not a target species and have not been implicated in a single attack in NSW since 1900.

Although the report does not define the species of the whales captured, a Hansard transcript from the New South Wales Legislative Council, on 17 November 1999, states that “in the past 50 years…… a total of three baleen whales have been caught in the net….. including two humpbacks….. and one minke whale…. and one killer whale.” 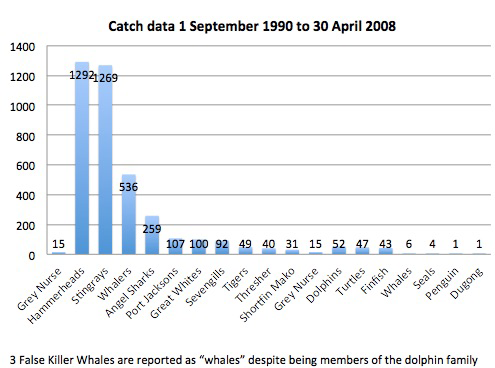 For all of this by-catch, the report further goes on to advise that the overall number of shark attacks was the same (61) in the 37 years before and after the shark mitigation program and that in the last 35 years there has been an increase in that rate of some 28%.[5] Additionally, the period from January 2000 to March 2009 saw 52 unwanted shark encounters, almost twice the rate of attacks between 1930 and 1939[6] which was when the fear of unwanted shark encounters saw Premier Bertram Stevens first introduce the SMP. With shark numbers decreasing in commercial catches in New South Wales, and within the SMP, the reasons for these increases in shark encounters are not due to the increase in the number of sharks, but more likely attributed to the increase of people using Sydney’s coastal waters through a population rise from 1.4 million residents in New South Wales in 1901 to over 6.9 million residents in 2008, as well as the increase in tourists. It is interesting when looking at these numbers however, that despite the five-fold increase in the state’s population, the increase in unwanted encounters is less than 30%.

Authorities continue to debate shark nets, with politicians continuously referring to the decrease in fatalities since the nets were installed. It is amazing how these people continue to justify the program despite scientific research and evidence. These nets were installed in 1937. Since then there has been amazing advances in medicine and technology. In fact, researcher David Caldicott published a study in 2001, which stated that the survival rate for shark bites is 80%, due to better on-scene treatment and antibiotics. 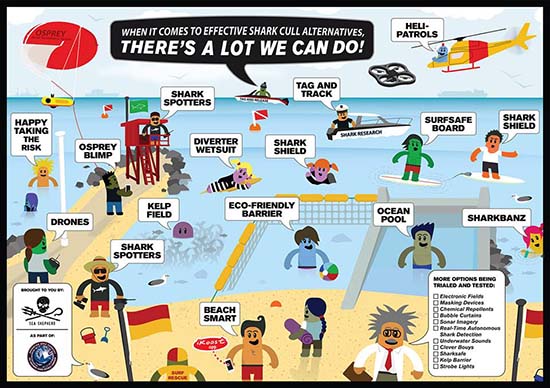 There are a range of scientifically proven ways to reduce shark incidents rather than measures that only provide a false sense of security.

For years now, the Department of Primary Industries (DPI), New South Wales has stated that “no feasible alternatives to the measures in the SMP are currently considered viable to trial” yet Shark Spotters, a program that has been keeping ocean users safe in Cape Town, South Africa for over a decade, has never been mentioned or considered in reports. The same can be said about the Eco Shark Barrier which has been used in Western Australia since December 2013 to keep swimmers safe and has recorded zero by-catch.

Yet the unwanted shark encounters at meshed beaches and the unfortunate by-catch of protected, vulnerable and endangered marine species continue to rise. In January 2012, surfer Glen Folkard was severely bitten by a bull shark at Redhead Beach, north of Sydney. This incident is still waiting a review by DPI, New South Wales, and, along with another two unwanted shark encounters at meshed beaches, was meant to be part of the programme’s 5-year review in September 2014. At the time of this article, this review has still not been finalised.

The Fisheries Scientific Committee (FSC) and the New South Wales Scientific Committee, has continued every year to raise concerns about the SMP to the NSW Government since 2009. The FSC has urged DPI to remove the statement that they have made yearly that the SMP is “effective at providing a safer environment for swimmers” claiming that “this statement is unsubstantiated because it is not based on a scientific comparison between meshed and unmeshed beaches of shark numbers, interactions or attacks.” The Committee has also attacked the lack of detail in annual reports by DPI, stating that “without sufficient detail there can be no rigorous review, or transparency in the outcomes of the program.” And they are right. Over 1,300 kilometres of New South Coast coast (or 93% of the state’s 721 beaches) is unmeshed, yet attack rates are miniscule. Knowing this, it is indeed heartbreaking to see the updated figures of by-catch caught in the SMP from 1950 to 2014, whereby 16,746 marine animals have been entangled in the shark nets. Shark nets which are only in place 17 days a month and are so badly designed, that sharks can swim around and over them and which have not prevented 39 unwanted shark encounters . New South Wales ocean lovers deserve better than 1930’s technology that lull the public into a sense of false security. 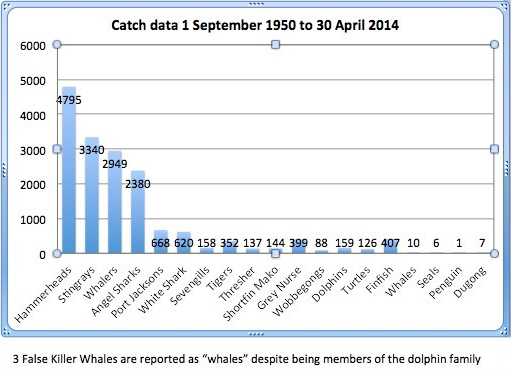 [4]This figure includes three false killer whales, which are actually members of the dolphin family, but reported as ‘whales’ in the Department of Primary Industries database