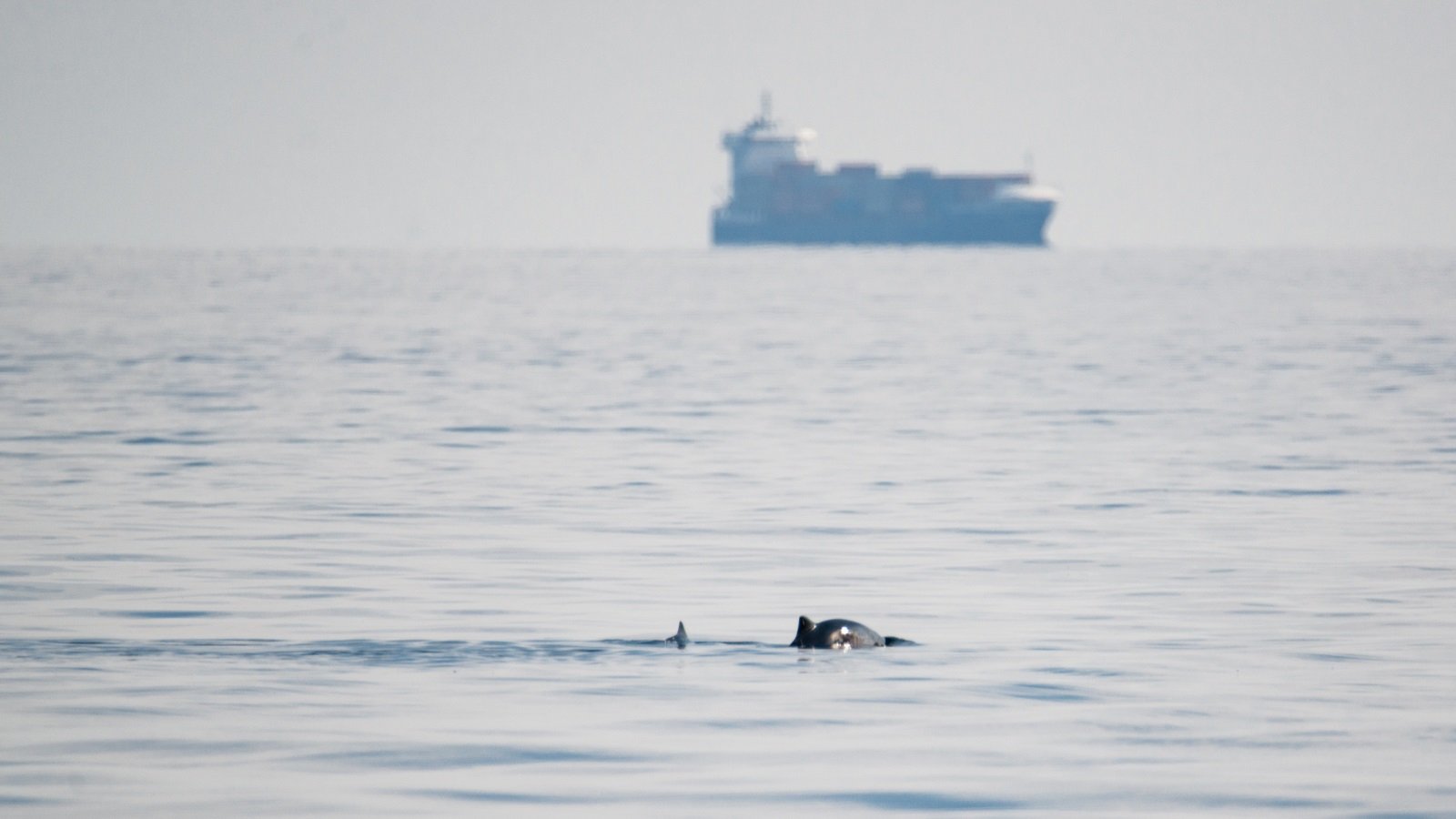 With only 500 animals left, the Baltic harbor porpoises have been declared critically endangered. Being killed as bycatch in fishing nets is the major threat for the animals, yet fishing is still permitted, even in Marine Protected Areas. In Sea Shepherd’s Perkunas campaign, the crew of the M/V Emanuel Bronner documented and monitored deadly gillnets in protected areas of the Baltic Sea. But accidental death in fishing nets is not the only human-caused threat for these animals. Eutrophication, underwater noise, marine debris, overfishing, and bottom trawling are also damaging the Baltic Sea ecosystem, affecting both harbor porpoises and the local populations that depend on it. 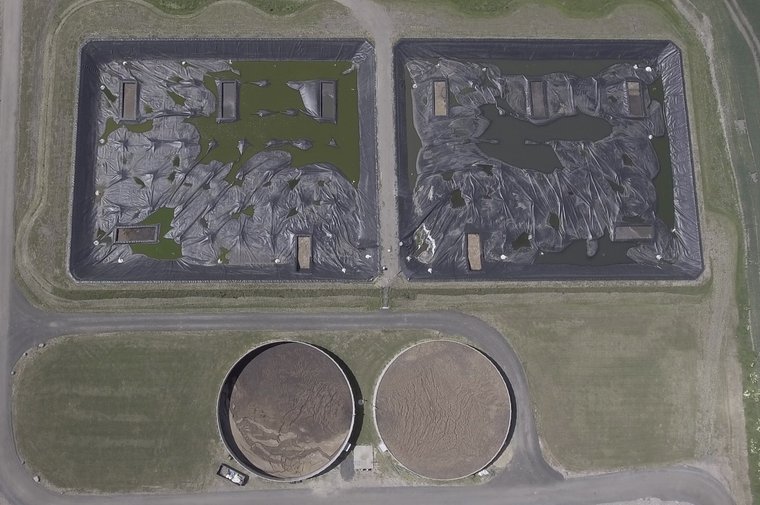 Giant liquid manure lagoons from a German pig farm around 3km away from the Baltic coast.

Eutrophication
Surrounded by nine northern European countries, the Baltic Sea is a brackish inland sea, vulnerable to a process called eutrophication. Excessive input of nutrients, primarily caused by industrial agriculture runoff, leads to a growth of algae that causes reduced light conditions in the water, as well as oxygen depletion. As a result, 97% of the Baltic Sea is considered eutrophied, causing some of the largest low-oxygen areas on Earth, so-called “Dead Zones”, where no life is possible. This ultimately affects not only the Baltic harbor porpoises, but the fishing industry as well.

Underwater Noise
Underwater noise is a particularly dangerous threat for cetaceans. Harbor porpoises have excellent underwater hearing abilities and depend on sound for their orientation, communication and foraging. The deadly effects of underwater noise pollution on marine wildlife include mass strandings and disrupted feeding. Sources of continuous noise are offshore wind turbines, shipping, boating, bridges, and tunnels. The planned Fehmarnbelt Tunnel seems absurd: the underwater tunnel planned to connect Denmark and the German island of Fehmarn will go directly through the Fehmarnbelt Marine Protected Area, an important migration area for harbor porpoises. The beneficiaries of this project are unclear, but the losers are certain: the wildlife of the Baltic Sea that will suffer from the destroyed seabed, the continuous noise, and the vibrations. Additionally, sudden bursts of noise, such as military testing, are of particular danger for the animals. If there was the political will, this additional noise could be reduced or even prevented by tactics such as air bubble curtains, yet they are barely used. The best option would be to prevent noise altogether, such as the demolition of the retired Karlsruhe frigate in the Schönhagen military area off the German Baltic coast planned for this fall. A shockwave from such an underwater detonation can lead to loss of hearing, serious injuries or even the death of porpoises up to seven kilometers away. Moreover, there is no need to dump more ammunition to the Baltic Sea, while ammunition from World War II is still causing water pollution due to corroded containers that release mercury into the marine environment.

Marine Debris
Marine litter in different sizes and materials causes damage to the ecosystem. Some of it can be easily seen, some of it is hiding on the seafloor, slowly degrading, increasing its impact by entering the aquatic food chain. Larger pieces of marine debris deteriorate the quality of the habitat and can cause injury or death of many species when they get entangled or ingest the debris. Around 70% of the litter documented in the Baltic Sea comes from plastics used by humans. Plastic materials can last for decades on the sea floor, and can travel long distance on the water currents or in the bodies of migratory species. Abandoned, lost or discarded fishing gear, so-called ghost nets, are worthy of special concern as they are not only made of plastic, but they continue catching non-targeted or even protected species for hundreds of years. 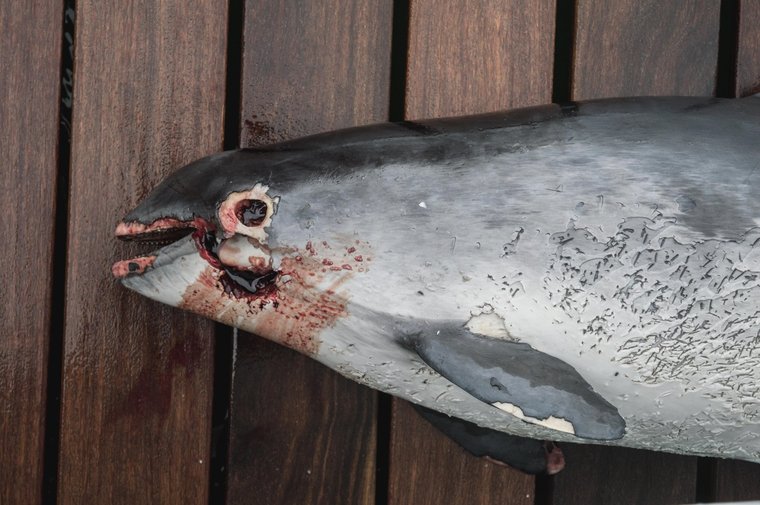 Overfishing and Bottom Trawling
Excessive fishing is a major problem in the Baltic Sea. More and more fish stocks are considered overfished, which means targeted species can’t naturally reproduce fast enough to replace the numbers caught. What seems like a profitable practice actually reduces fisheries profits and threatens the existence of other marine species that depend on fish for food. To avoid the collapse of fish stocks, quotas for catch are decided every year by the European Union. Unfortunately these quotas do not always take into account the advice of scientists, leading to numbers that are not sustainable. Also, history has shown that fishermen do not change their practices if there are not sufficient controls, leading to an unknown number of illegally caught fish. A decline of fish stocks ultimately means a decline in food sources for harbor porpoises. In addition to all this, the common practice of bottom trawling is destroying the sea floor, which is important for the spawning of many species.

A Call for Action
Disturbances of the marine ecosystem are not only a threat for wildlife, they are also a threat for humans. Not only do millions of people rely on the Baltic Sea as a food source, but a healthy ecosystem is the basis for life in this region. It’s not one person or activity that has serious impact on the environment, but the multiplication of these activities several million times. There are issues that can only be addressed in small steps, and there are issues that can be tackled right now. The two top priorities for the protection of the harbor porpoises in the Baltic Sea are to stop the risk of being killed as bycatch and to reduce noise pollution. Both can be done easily, if there is the political will. Sea Shepherd therefore demands a ban of gillnets and other destructive fishing gear in protected areas and calls for the stop of the Fehmarnbelt Tunnel project and the demolition of the retired Karlsruhe frigate.