Playing Fair with the Faroese 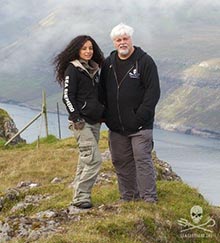 Captain Paul Watson and Lamya Essemlali in the Faroes, 2011Over the past two months, a few hundred Sea Shepherd volunteers have come to the Faroe Islands. It is not an easy place to reach and it is expensive to get there, and even more expensive to stay there. Yet these volunteers have come from more than thirty different nations at their own expense, all united by one common goal - and that is to stop the slaughter of pilot whales and dolphins in the Faroe Islands.

These volunteers have been described by some in the Faroe Islands as “invaders,” although they all entered through the proper legal channels at legal ports of entry.

It is however understandable that their arrival could provoke animosity in some citizens. The presence of Sea Shepherd volunteers brings unfavorable attention to the Faroe Islands and the images of blood-drenched men wading in blood-stained waters, stabbing and killing pilot whales, are deeply disturbing to people around the world. We have found that it is deeply disturbing to many people in the Faroe Islands as well.

Generally speaking the people of the Faroe Islands are polite and peaceful, and sometimes after meeting many of them it is even more difficult to understand how something as horrific as the Grindadrap can exist there.

The people we have met on the street and visited in their houses do not seem any different than anyone we meet elsewhere. They can be wonderfully kind and amazingly open to other points of view.

We have also been impressed with the fairness and the professionalism of the Faroese police. They do take the concerns of Sea Shepherd volunteers seriously and they do respond.

Case in point: Last weekend Sea Shepherd Spain volunteer, Sergio Toribio was assaulted on the island of Sandoy. The police immediately responded, an investigation was initiated, and the suspect was detained and is being held in pre-trial custody.

And as it turns out the man not only assaulted Sergio, but also has assaulted a Faroese man over another matter, and thus it seems it was an act of an angry individual that really had little to do with whale killing.

Yes, there are insults directed at Sea Shepherd volunteers and petty acts of vandalism against Sea Shepherd property but so far nothing aggressively violent. Many supporters of the whale killing seem content to unleash their anger in fabricating stories about Sea Shepherd volunteers stealing everything from toilet paper to beer - although none of it has a shred of evidence and there have been no complaints of theft to the police.

One volunteer who broke a cardinal Sea Shepherd rule about possession of drugs (marijuana) was arrested and deported and Sea Shepherd agreed with the police that as he committed a crime, it was proper to deport him. Of course this led to a flurry of accusations that Sea Shepherd volunteers are all drug addicts. However one indiscretion amongst some 300 volunteers is hardly the basis for a mass condemnation.

But we understand that it is human nature to do so. Many of our supporters made the mistake of condemning the Faroese for the act of a single individual who assaulted one of our volunteers.

I can honestly say that the atmosphere on the ground in the Faroes is far more civilized and safer than the times we opposed sealing in Canada. There, we were routinely attacked and often beaten, and the police and the Coast Guard made no pretense of impartiality. In fact we were sometimes beaten by the police and the Coast Guard. Amazingly, the former Canadian Fisheries Minister, Brian Tobin said that he understood the frustrations of Canadian sealers who resorted to violence against anti-sealing advocates.

I can honestly say that the police in the Faroes are far more objective and fair than the police in Japan, where dolphin defenders have been physically attacked in the presence of the police who did nothing, and where a Sea Shepherd volunteer was framed in an assault charge on the mere say-so of a Japanese citizen. He was found not guilty when the judge decided the accuser was simply not credible. He was released after two months in jail although the government had to afterwards pay compensation for a false arrest.

I myself have referred to the killers of the whales as psychopaths and that is an accusation I stand by. However it has been misunderstood by many that I made this accusation against all Faroese citizens. I did not. 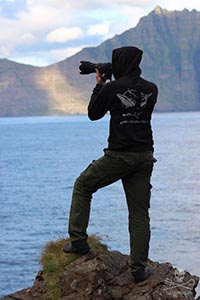 Sea Shepherd volunteer in the FaroesSea Shepherd does not and has never opposed people simply on the basis of their nationality, ethnicity, race or beliefs. We oppose the killing of marine wildlife, specifically on legal and ethical grounds.

It is our position that killing whales and dolphins is akin to murder. We believe it to be a highly unethical crime against nature and humanity. That is the sole reason we are in the Faroe Islands. When some Faroese people who opposed the killing came to us with a complaint that our logo incorporating the Faroese flag was something they found offensive, we responded by immediately redesigning the logo to remove the Faroese flag. We did not argue with them. We respected their concerns.

However we have no choice but to oppose it because of our dedication to our position of opposing the killing of all cetaceans worldwide by anyone, anywhere.

We do not discriminate in our opposition. We have opposed whaling and dolphin killing in Norway, Iceland, Japan (both in Japan and in the Southern Ocean), in Russia (the former Soviet Union), in Spain, Scotland, Australia, South Africa, the USA (the Makah whaling initiative that we stopped), Portugal, and the Faroes.

Sea Shepherd is not an American group. We are an international movement and each and every Sea Shepherd group is an independent entity united by a common cause. When told to go home, our answer is that the ocean is the life support system for all of humanity and therefore protecting bio-diversity in our Ocean is a part of our collective home.

There is also the mistaken impression held by some in the Faroes that I am the leader and organizer of GrindStop 2014. I am not.

The Sea Shepherd opposition to the Grind was initiated in 1983 by David McColl of Sea Shepherd Scotland. I did lead campaigns in 1985, 1986, 2000 and 2011. Lamya Essemlali of France led the campaign in 2010, and this year the campaign is being led by Lamya on the water and by Rosie Kunneke from South Africa as leader of the land-based volunteer team.

My role is simply to write commentaries.

We are not picking on the Faroe Islands as some critics have indicated. Presently we have active campaigns underway in Australia, Belgium, China, Ecuador (Galapagos) Italy, Japan, Honduras, Nicaragua, Costa Rica, Brazil, the USA (Oregon and Hawaii), Canada, Cape Verde and West Africa, and the Faroes.

Some of our supporters have been harsh in their comments about the Faroe Islands and some of these comments have been unfairly directed towards all Faroese. These comments, however, do not reflect the position of Sea Shepherd, for we do not oppose nor are we interested in opposing the Faroese for being Faroese. We oppose only the whale killers.

At the same time, we do not attribute the insults and threats directed at us from those who support the slaughter to all Faroese people. We know where they are coming from and thus they are irrelevant, just as those who insult the Faroese as a people are irrelevant.

We will of course seize on that as an opportunity to show that the Japanese who have been found guilty of illegal whaling by the International Court of Justice will be in an alliance with the Faroese whalers. And the images of Japanese dolphin killers alongside Faroese pilot whale butchers will be powerful indeed. However we hope that the Faroese whalers will not be silly enough to give us the opportunity to exploit such complicity. But if they do, we will.

And as for the arguments about numbers, questions about the humaneness of the slaughter, and cultural rights, etc. Well none of these are really relevant to Sea Shepherd. Both sides have opinions. The whalers say that there are plenty of whales. In our opinion they are endangered, in no small part because all life in our oceans is endangered by so many negative factors - from overfishing to pollution. The whalers say that the killing is humane. We do not think it is possible to humanely kill a whale, and besides, the method of killing is secondary to the killing itself. And as for culture, well cultures need to adapt or die and any cultural rite or ritual that is dependent upon cruelty and death should be tossed into the dustbin of humanity’s very shameful history.

Our crewmembers have met with many young people, especially at events like the Klaksvik Music Festival and have made many friends. Lamya Essemlali, the President of Sea Shepherd France, is trying to organize a soccer game between young Faroese people and young volunteers from Sea Shepherd.

The point of this article, however, is simply this: It is the position of Sea Shepherd Conservation Society that we oppose the slaughter of the pilot whales and dolphins in the Faroes by Faroese whale killers and we do so without prejudice. We hold no animosity towards the Faroese people and we believe that other than the Grind, the Faroese people enjoy a remarkably peaceful and admirable lifestyle. The country is exceptionally green and beautiful, and the oceans are pristine and blue - and will be even more so when the color red is permanently removed from the beaches and the water.

Keep the waters blue and the Faroes will be seen as a jewel of a nation where people may come to experience what I have experienced over the years – a country of profound natural beauty and fairytale majesty.