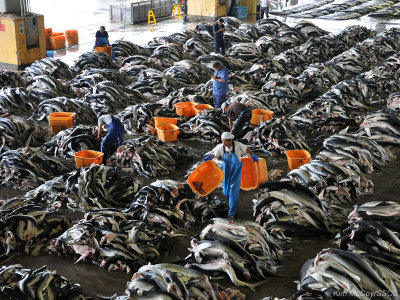 Sharks being processed for consumption
Photo: Kim McCoy / Sea Shepherd The health supplement industries are quietly slaughtering massive numbers of sharks by quietly riding the coat tails of destruction, caused by the shark fin and shark meat industries and just picking up the ‘scraps’ as they’d have you believe.

The demand for this miracle drug that supposedly temporarily relieves joint pain is growing as the average lifespan of humans lengthens. Chondroitin Sulphate is the core ingredient and can be found in any cartilaginous form. Sharks as well as cattle have cartilage, but the quality and grades vary.

An example of this would be the mass genocide of blue sharks that pass through the Japanese port of Kesenuma daily. Blue sharks have the highest levels of Chondroitin Sulphate, yet their meat is considered almost worthless due to high urea levels, this means that they are deliberately being targeted for the health supplement industry, an industry that markets itself on being sourced on ‘by-products’. The Japanese scientists have perfected the process and Japanese cartilage pills are considered to be the purest, giving more relief for less pills or ‘more bang for your buck!’

Yet Blue Sharks are also being targeted in Australia and New Zealand, too. One company COSTAR has this statement and exports globally:

“Blue Shark Cartilage is obtained from the most pollution free waters, the Antarctic Sea around Australia and New Zealand, which is the highest quality.”

In 2013, the global shopping organization GROUPON was challenged by Sea Shepherd on ethical grounds over a promotional offer for Shark Cartilage pills on an offer within Asia. Groupon made a swift and responsible decision to not only cease the promotion immediately, but to announce that GROUPON would “also refrain from launching any deals involving shark or shark fin related products.”

Thousands welcomed this statement globally and it restored faith in the company. 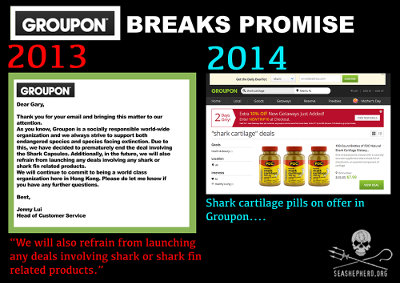 Groupon's lie
Photo: Gary Stokes / Sea Shepherd Sadly like most corporations, greed or ignorance seems to have triumphed, and today GROUPON has an offer for Shark Cartilage pills on offer for US$7.99 on their US websites.

So why should you avoid shark cartilage pills?

Shark Cartilage pills do not specify which species of shark are used in their production. These pills are often made with a cocktail of shark chondroitin from multiple species, whatever is available at the time. A recent example of this would be the discovery of a whale shark processing factory in Puqi, China by WildLifeRisk, (a Hong Kong based NGO). This undercover investigation will be featured in the upcoming movie “6” directed by Louie Psihoyos of Oceanic Preservation Society, who also made the Oscar-winning documentary, “The Cove.” Here whale sharks were being processed for shark liver oil, as well as cartilage, fins, meat and skin. These whale sharks ended up in Shark Liver Oil capsules being sold in the USA and Canada under the brand OMOJO in stores such as WALGREENS, TARGET, THE VITAMIN SHOPPE and DRUGSTORE.com. Besides OMOJO not informing their sellers that they are selling pills made from a CITES Appendix II listed endangered species, they also made them accomplices in a Trans National Wildlife Crime. It is illegal to kill whale sharks in China, and its illegal to profit from a crime committed in another country, otherwise known as a Trans National Wildlife Crime. The pills also broke CITES (Convention on International Trade of Endangered Species) that forbids the ‘International Trade’ unless a CITES permit is applied for. OMOJO is also in violation of the United States Lacey Act. Technically, by purchasing these pills, legally YOU the buyer are also an accomplice in a Trans National Wildlife Crime, in the same way that if you purchase ivory, and therefore have the illegal blood on your hands. So you may want to watch out what you and your family are purchasing.

This is what all the producers of shark cartilage will tell you, even those in Kesenuma, Japan. In fact this is exactly what the South Australian Shark Cartilage Company told us two days ago. “Yes, it does genuinely concern us where we source our by-product!” The company believes that they are not part of the problem facing sharks, as they source their cartilage from fishermen out for meat for the Australian Fish & Chip market.

The problem is that who ever you talk to — shark fin traders, cartilage pill producers or meat vendors — each one claims to be using the by-catch of the other! Meanwhile more than 100 million sharks are being wiped out annually, and this is the reality. Fishermen fish for money, and so long as people will pay for shark parts they will continue to kill them. If the cartilage were literally a waste item that would be generally thrown away you would think it would be free! But no, the fishermen make money from the cartilage, therefore proving a financial demand is present, which continues to fuel the targeting of sharks.

“Yes, we do buy the bi product from the fisherman and are well aware of the shark species by-product that we purchase and receive, which is school and gummy shark….” South Australian Shark Cartilage Company 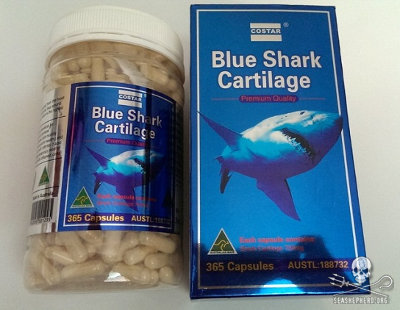 COSTAR Blue Shark Cartilage
Photo: Gary Stokes / Sea ShepherdThe myths being spread about the benefits and powers of shark cartilage range from the slightly believable to the absolutely far-fetched. Manufacturers will make up any sales pitch to say why their product is better, more effective or purer than that of their competitors. The South Australian Shark Cartilage Company, for example, uses an “Ocean Cleansing” process where microscopic sea lice clean the cartilage, using these little critters to eat away any remaining flesh so only the purest cartilage is used. Other companies around the world have gone a whole lot further in their statement, claiming that shark cartilage is a cure for cancer. Imagine how low you have to be to sell people on false hopes, so that they can sit by and watch their loved ones succumb to cancer and die. Even the American Cancer Society has come out against these statements:

“Available scientific evidence does not support claims that shark cartilage products sold as dietary supplements are an effective treatment for cancer, osteoporosis, or any other disease.” – American Cancer Society website.

People will do or say anything to sell their wares!

We are not asking you to deny pain relief to loved ones in your family. Even though chondroitin sulphate and glucosamine are not ‘scientifically proven’, many people have claimed to see some benefits.

As with most things, there are plant-based alternatives to Chondroitin Sulphate & Glucosamine. These are Vegan certified, and easy to find online, so please check out your family’s medicine cabinet, and replace any shark cartilage products for your loved ones.

Sign the petition to have Groupon USA remove the products here