Paddling For The Oceans 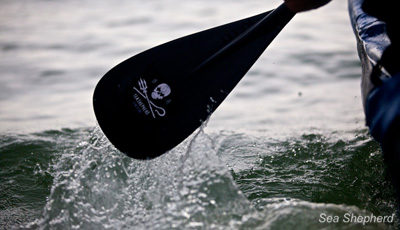 Sea Shepherd Paddle
Photo: Sea ShepherdOn 12th - 14th June, 2013 the best outrigger teams from around the world will be competing in the Olamau Race in Hawaii. This grueling race is the ultimate unlimited outrigger canoe challenge. The course is 100 miles covering some of the most ferocious ocean around the volcanic north shore of Hawaii’s Big Island. Described as the formula one of the outrigger calendar this race is not for the faint-hearted.

Kevin Kelly recently approached me about joining forces for the ocean as the team of hardcore paddlers from Hong Kong are entering the race this year. They want to help promote Sea Shepherd’s global efforts to save our oceans whilst they compete in front of the world’s media and also introduce Sea Shepherd Conservation Society to the global paddle community. They are donating 50% of all their fundraising to Sea Shepherd, (the other 50% from their fundraising they are using to cover the teams expenses in getting to Hawaii).

The international team is made up of top paddlers from Hong Kong’s two most competitive clubs, Lantau Boat Club and the VRC Hong Kong Paddle Club. The team is training hard here in Hong Kong in preparation, in fact I just received this text from them whilst writing this article, “Paddled 46k yesterday, 38k today and we’ll be doing another 45k with sprints tomorrow!” 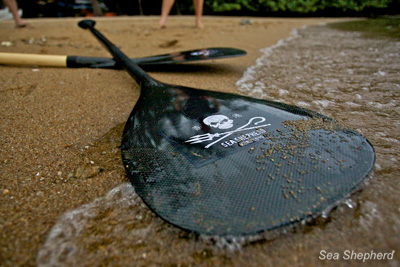 Sea Shepherd paddles that will be used during the race
Photo: Sea Shepherd

Sea Shepherd’s involvement has been a joint effort between Sea Shepherd Hong Kong and the newly formed Sea Shepherd Hawaii. The team will be helping to promote the latest campaign Operation Reef Defense launched by Sea Shepherd Hawaii’s Director, Deborah Bassett. This campaign is aiming to draw global attention to the protection of our reefs from over-exploitation and human damage. The aquarium and live reef fish trades are having a serious effect on our reefs and nowhere is this better highlighted than in Hawaii where the aquarium trade is currently driving several species closer towards extinction.

With the team based in Hong Kong, another campaign very close to the team’s heart is the shark fin issue. Hong Kong is ground zero of the shark fin industry, with over 50% of the world’s shark fin trade passing through Hong Kong. Each year more than 100 million sharks are killed to supply Asian markets with shark fins for soups at banquettes and weddings across the region.

As we draw closer to race day we will be updating with progress reports and of course we’ll be covering the  race and have Sea Shepherd Hawaii providing support on the ground and at race events. 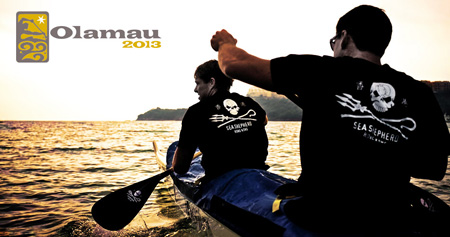 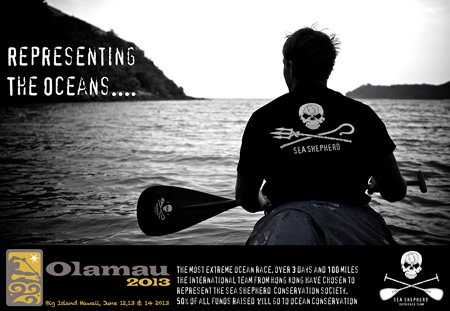