Our New Friends on the Whaling Fleet Tanker Sun Laurel 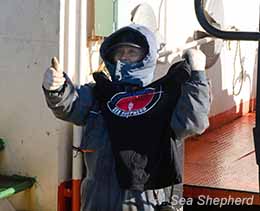 Dissention in the ranks of the Sun Laurel had begun the day prior, after the Sea Shepherd Ships had blocked a refueling attempt by the Nisshin Maru, which took two swipes towards the Steve Irwin, the second closer than the first.  Much to the surprise of the Delta Crew, some of the Sun Laurel’s crew surreptitiously gave them thumbs ups and applause, and took turns photographing one another in front of the Steve Irwin and Delta.

But the tide turned the moment the Sun Laurel was hit four times by the 8,000-ton Japanese whale butchering ship, sustaining significant damage to the davit on their primary lifeboat and the crane used to launch the secondary liferafts, rendering both inoperable and useless in an emergency situation.  This means that on their thirty-day voyage back to South Korea, they will have no lifesaving equipment in the event of an abandon-ship situation.

That was the final straw. The crew of the Sun Laurel let the Sea Shepherd know that they were not supporting the whalers and they were not happy their captain had brought them down to the Southern Ocean on what to them was a mysterious and illegal mission.

During the collision one of the Filipino seaman on the Sun Laurel tossed a bottle to one of the Sea Shepherd crew on the Bob Barker.

The note read: “To Research ship. Please: ‘May Day’ ‘Help’ All crew did not know to this Antarctic trip. So all crew don’t like to supply this fishing vessels. We cannot use telephone so we cannot speak to IMO. Please you as soon as possible catch action. Thank U.”

They also included a note with an order from their captain saying that the crew were denied access to the telephone from January 20th to February 28th. The frightened crew did not know they were going to Antarctica and were completely cut off from the world.  They could not contact the IMO about their situation, or even their families.

Some of the crew on the Bob Barker tossed six Sea Shepherd crew T-shirts to the Sun Laurel crew and cheered when the Filipino crew put them on.

Captain Peter Hammarstedt radioed the Captain of the Sun Laurel with an offer to give them a liferaft to replace the one that the Nisshin Maru had crushed. The tanker captain replied that he could make do, but appreciated the offer.

A few hours after the incident the Sun Laurel left to head north and away from the whaling fleet. The ICR announced that the fueling operation was suspended.

The Sun Laurel has headed north escorted by the Sam Simon, who is prepared to assist the ship in the event of a distress situation.  Their company may have them stop to attempt another refueling north of Sixty degrees, but this is unlikely, as the Nisshin Maru is not following. 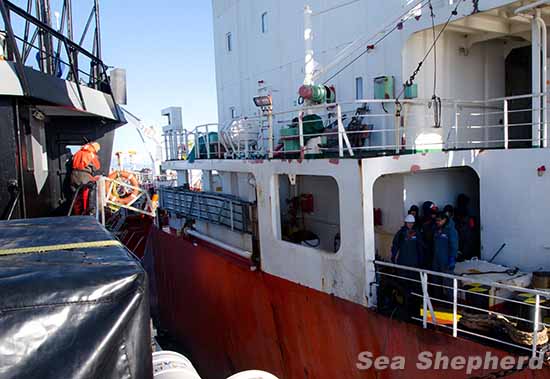 The crew of the Bob Barker tossing t-shirts
to the crew of the Sun Laurel
photo: Sea Shepherd Australia/Glenn Lockitch150 miles to the south, the Nisshin Maru has headed west and then east then west and then east again, essentially going nowhere.  But while they are going nowhere, they continue to be flanked by what is now an all-too-familiar sight – the Bob Barker and the Steve Irwin shadowing their every move, undeterred by several rammings each.

Without the tanker the Nisshin Maru has a problem; they cannot stay in the Southern Ocean killing whales if they don’t have the fuel and their hired tanker is heading home. With less than three weeks in the whaling season their only option is to refuel in Indonesia and by the time they get there, it will be too late to return.

Meanwhile we wish our new friends on the Sun Laurel a good trip home with the hope that they will be able to call their families and get comfort after having their lives endangered by the Nisshin Maru in some of the harshest conditions on the planet.

The officers of the ship seem to have little regard for their safety as well, and we saw several members of the crew the nearly get hit in the head with the swinging hook and block on the crane.  None of them were equipped with helmets.  They were mostly a good bunch of young men caught in the middle of an issue that took them into a situation they were not prepared for.

The message from the crew is an indication that the Captain, Owners, and Manning Agents of the crew for the MT Sun Laurel are in direct violation of the Maritime Labour Convention (MLC, 200). The MLC convention, established by the International Labour Organisation (ILO), is a UN body that sets out seafarers' rights to decent conditions of work.  It has been designed to become a global instrument of the international regulatory regime for quality shipping, complementing the key Conventions of the International Maritime Organization (IMO).  We are reporting this to the Maritime Authorities in Panama regarding the violation of the MLC Convention. This will be our 2nd report- the first one was about the oil pollution incident on the 17th of February.

Because of the decision of the Sun Laurel to leave the Southern Ocean, the crew can take satisfaction that they played a key role in saving the lives of hundreds of whales.  They held the key to keeping the Nisshin Maru operating in the Southern Ocean and by leaving the whalers behind, they have effectively helped to silence the harpoons.

Until the whalers leave or the season ends, Sea Shepherd ships will remain in the Southern Ocean to ensure the success of this year’s mission.

We can only hope that it is our last campaign in these waters, but if the Japanese whalers decide to return next December, we can promise that Sea Shepherd will be down here to meet them once again when they arrive. 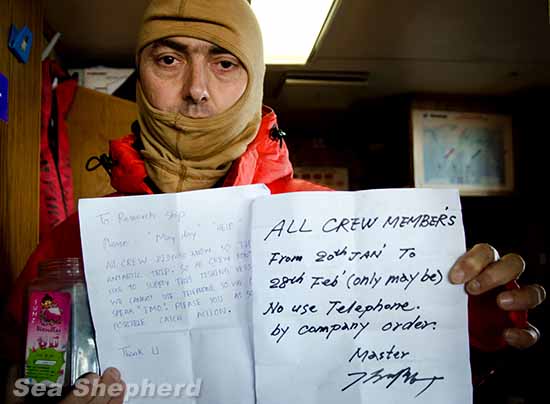 Bob Barker Comms Officer Marcel holding up the notes he received in a bottle
from the Sun Laurel  photo: Sea Shepherd Australia/Glenn Lockitch 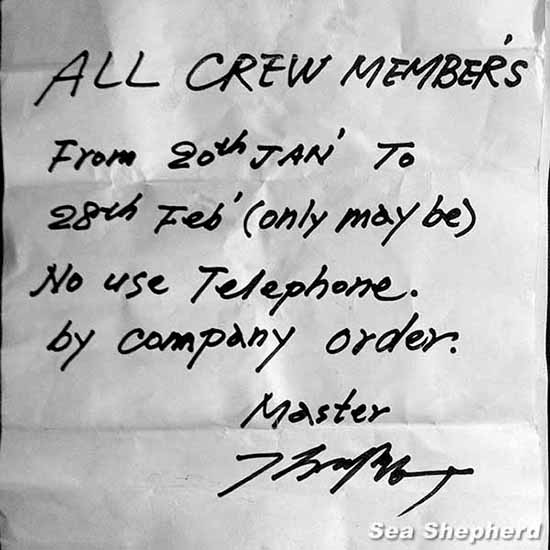 Posted orders from the captain of the Sun Laurel telling the crew that they will denied
access to the telphone for five weeks. photo: Sea Shepherd Australia/Glenn Lockitch 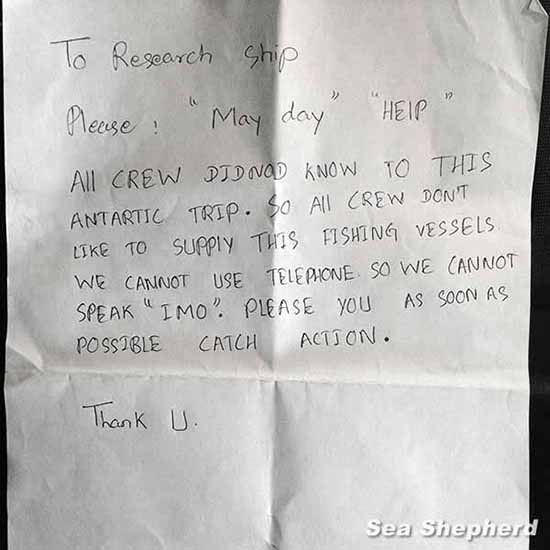 MayDay distress note from the crew of the Sun Laurel requesting that IMO be
contacted on their behalf photo: Sea Shepherd Australia/Glenn Lockitch