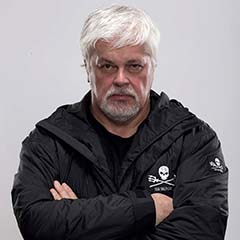 The signatory nations to the relevant conventions have not done anything but talk.

No other NGO, aside from Sea Shepherd, is doing anything to intervene.

Japan returns to the killing fields with an arrogant confidence that they will be unopposed.

The question is what will Sea Shepherd do about this egregious and illegal invasion of the Southern Ocean Whale Sanctuary?

Sea Shepherd has actively opposed the unlawful slaughter of whales in the Southern Ocean since 2005 with aggressive interventions that have saved the lives of 6,402 whales including Minke, Humpback and Fin whales.

Sea Shepherd has fought the outlaw whalers on the high seas and in the courts, in the United States and in Australia.

In 2008 the Australian Federal Court declared that Japanese whaling in the waters of the Australian Whale Sanctuary was unlawful and issued an injunction against the whalers. Last month the court fined the whalers $AU 1 million for continuing to slaughter whales in breach of the injunction.

In 2014 the International Court of Justice (ICJ) ruled that Japanese whaling was neither scientific nor lawful and ordered the Japanese whaling fleet to cease and desist from killing whales.

In 2014, the International Whaling Commission (IWC) once again denied a permit to Japan to kill whales in the Southern Ocean. In 2015, the IWC and its scientific committee declared that the revised Japanese research program, NEWREP-A, also had insufficient elements to be considered of scientific nature. 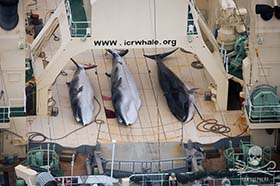 Three dead Minke whales, slaughtered illegally by the Japanese whaling fleet in the Southern Ocean Whale Sanctuary. Photo: Tim WattersJapan agreed to abide by the order of the ICJ and did not kill a single whale during the 2014/2015 season. This cessation in their whaling operations was an acknowledgement that they accepted the ruling of the court.

Now, in open and arrogant defiance of the Australian Federal Court, the International Court of Justice and the International Whaling Commission, Japan has announced that they will return to kill whales in the Southern Ocean.

Australia and the other members of the IWC could take action to stop the whalers. The question is, will they, or have they been compromised by threats of trade retaliation from Japan?

There is no question that Sea Shepherd opposition has been a leading factor in bringing Japanese whalers to their knees, both through an annual reduction in quotas and in focusing international public attention on Japan’s nefarious whaling activities. 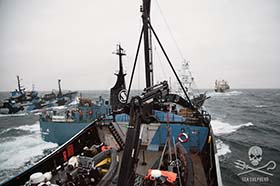 The Steve Irwin narrowly avoids a collision with the Japanese harpoon vessel while in pursuit of the Nisshin Maru. Photo: Tim WattersThe Japanese whaling ship Shonan Maru No. 2 rammed and destroyed the vessel Ady Gil that was chartered by Sea Shepherd in 2010. Japan simply refused to acknowledge the investigation by New Zealand and suffered no legal consequences for destroying the vessel.

Japan also used its economic and political clout to have myself placed on the Interpol Red List, demanding extradition on the charges of “conspiracy to trespass on a whaling ship” and “interference with commerce.”

Japan uses the courts to get what it wants and ignores the court rulings against it.

Japan, however, made a major mistake in bringing its case before the U.S. Federal Court because it gives Sea Shepherd USA the legal grounds to counter sue Japan.

Japan submitted itself to the U.S. jurisdiction when they filed against Sea Shepherd USA and that has enabled Sea Shepherd USA to countersue against Japan. Our case has changed from a defensive action to a legalistic attack on Japanese whaling where we can seek rulings that prohibit Antarctic whaling, declare the whalers are engaged in piracy, award us damages for the loss of the Ady Gil, secure an injunction preventing the ICR from attacking Sea Shepherd ships, expose the ICR's illegal activities to the world, and perhaps even secure an injunction against Japan’s illegal whaling activities in the Southern Ocean.

We cannot simply defeat the Japanese on the water, we also need to do so in the courts and we cannot surrender to their arrogance in defying international law.

Because Sea Shepherd USA and myself are legally prohibited from interfering with illegal Japanese whaling operations, Sea Shepherd USA is restricted to battling the whalers in the U.S. Courts while Sea Shepherd Global maintains their legal right to continue operations on the high seas in accordance with Dutch and Australian laws.

For over a decade Sea Shepherd has contributed to Japanese whaling operational losses and to the now diminished quota of 333 whales instead of the 1,035 whales they previously and unsuccessfully attempted to take.

This means that because of Sea Shepherd efforts, 602 Minke whales every year going forward will not be part of Japan’s kill list, nor will there be a single Humpback or Fin whale on their death roster.

The issue, however, is not just one of numbers. We are talking about the integrity of the Southern Ocean Whale Sanctuary that demands nothing less than a zero quota.

The logistics of the situation in the Southern Ocean have changed considerably. Lowering the quota and expanding their hunting area means it is more difficult and takes more time to track down the whaling fleet and in that time they can take most of their reduced quota. They are expected to take aggressive measures to stop any interference by Sea Shepherd Global. They have also said that if they don’t reach their quota they will add the losses to the quota the following season.

Although neither Sea Shepherd USA nor I can legally oppose the illegal whalers on the high seas, my right to report on the activities of, and to give moral support to the efforts of Sea Shepherd Global, remains. 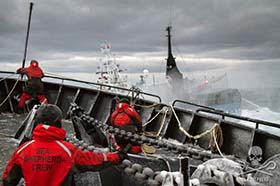 Harpoon vessel of the Japanese whaling fleet engages in an attack on the Bob Barker as it defends the whales of the Southern Ocean Whale Sanctuary. Photo: Simon AgerI have absolutely no control over the campaigns by Sea Shepherd Global but there is no need for me to be directly involved. The campaigns have been in the capable hands of Captain Alex Cornelissen of the Netherlands, Captain Peter Hammarstedt of Sweden and Captain Siddharth Chakravarty of India since 2012, and they have courageously and effectively defended the whales of the Southern Ocean.

My hands have been tied behind my back by the U.S. court but I have not been gagged and these three intrepid Captains and their brave crews have continued on in this urgent effort to stop Japanese crimes in the Southern Ocean Whale Sanctuary. Although I cannot be involved, I can exercise my freedom of speech to wish them well in these efforts.

Sea Shepherd Global has informed me they have a new ship under construction, a long-range fast vessel that is being built specifically for hunting whalers and other high seas poachers. Unfortunately this ship will not be ready for deployment until September 2016.

In the meantime Sea Shepherd USA needs to continue to petition the U.S. Courts to sanction Japan’s unacceptable defiance of international law.

Sea Shepherd Global is an anti-poaching organization dedicated to operating within the boundaries of international law, to uphold international conservation law, with a commitment to absolute non-violent tactics.

The Japanese whalers must be stopped. Sea Shepherd Global first and foremost urges the signatory nations to the IWC and the ICJ to enforce the law, and I have been informed by Sea Shepherd Global that they are committed to upholding the law against all poaching in the Southern Ocean.

To be blunt, however, intervention this year will be difficult. The whalers have a great area to operate with a reduced quota. They will have three harpoon vessels to block any approach by any Sea Shepherd Global ship. Sea Shepherd Global does not have the war chest of Greenpeace and although Sea Shepherd Global has been requesting support from Greenpeace, it is not expected that support will materialize. Greenpeace has a ship in Chile and they could intervene. We hope they do so but there is no sign that they intend to do so. They do however have a petition. 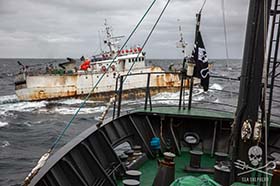 Japan has vowed to slaughter 4,400 whales in their new so-called “scientific” program.

Sea Shepherd Global has told me they are committed to the objective of making sure they do not.

No other organization in the world has committed as much time and effort and taken as much risk as Sea Shepherd in this long crusade to defend the Southern Ocean from criminal activity.

Or people can support Sea Shepherd Global efforts to oppose the poachers on the high seas.

Or people can support both efforts.

Together yet separately Sea Shepherd USA and Sea Shepherd Global can end the renegade illegal whale killing actions of the Japanese whaling fleet.