Opposing the Horrific Depravity of Senseless Slaughter in the Faroe Islands 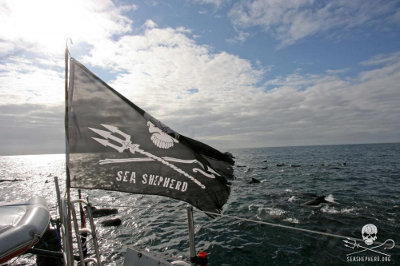 A pod of pilot whales off the stern of the Brigitte Bardot
Photo: Sea ShepherdIt has been 46 days that Sea Shepherd volunteers have been in the Danish Protectorate of the Faroe Islands.

No whales have been murdered during this time.

For 46 days the volunteers have met and spoken with many Faroese and have found many who also oppose the brutality of the slaughter of the pilot whales, this bloody sadistic abomination the Faroese call the “Grind.”

Unfortunately, there remains a hardcore group of whale killers who seem almost to justify their very existence by participating in the grisly slaughter of entire families of innocent and defenseless whales.

They like to kill. They want to kill. It is as simple as that. They like killing in the same way that big game hunters or serials killers like to kill. It gives them a rush, emotionally and sexually. One Faroese observer even described it as a frenzy.

We need only look to words written by a Faroese writer to illustrate and demonstrate the psychotic aspect of the grind and the fact that they really take pleasure in the killing of the whales. I would like to take an extract from the book "Pilot whaling in the Faroe Islands" by Joan Paul JOENSEN. This book is presently being sold at the tourism office in Torshavn:

“A Faroeman I met a little later beamed upon me in his excitement and said, ‘There is whale in the fiord – plenty whale; it will give us a little pleasure if we can kill him!’ I was to recall that remark later – as a classic understatement of the truth!”

“The long blades carried out a dreadful job and soon, the water and foam were streaked with purple veins. Foul streams of blood gushed from the bodies beneath the waves and spread out on the sea’s surface.”

“The whales’ backs cut through the waves and their blood jetted out into a purple mist, oozing in their wake whilst they frantically ploughed through the waves. They whined in their agony under the reddening water, like woeful, pathetic crybabies.”

“There was much amusement, as much for the spectator as for the worker. Excitement was rising like a fever in everybody’s veins. Often, whilst a whale was being drowned, someone disemboweled it and after a short rummage with the blade of a knife, extracted the kidneys and liver from behind the steaming intestines.”

“Children helped pull on the ropes and the hands of two small girls were stained red up to their wrists so that it seemed they were wearing scarlet gloves. So many children were riding the whales which were being dragged out of the water as for a rodeo, they stayed in place displaying their indifference to the slaughter of their ride and flung themselves on its heart, liver and kidneys when these were torn out. At the entrance to the port, boys younger than adolescents were using hooks attached to ropes to harpoon the whales which had sunk in the port after dying. Their delight was extraordinary.”

"With long lances and knives the men fought, using hooks attached to lines to draw the boats within striking distance; and as the blood flowed freely from the wounded whales, their comrades would not leave them.”

“Even if they reached clear water, they turned again seeking the blood. The large whales seemed to be trying to protect the small ones. Some of the whales, maddened by lance wounds, rushed forward and were stranded in the shallows where they were met by men of Sorvagur and Bour, who, breast deep in blood and water, struck again and again with their grind knives to severe the spinal cord. At last it was over. Not one whale escaped. A hot, heavy odour filled the air; two hundred eighty-six whales lay dead and dying on Midvagur beach.”

“Their broad thick lips curved backward in a grotesque smile, disclosing the small white teeths clenched fast. There lay the leader of the flock, and there, oh the pity of it were poor little baby whales lying by their mothers, born in the agony of panic and of death."

This book written by a Faroese observer puts a lie to the Faroese claim that the whales die in 2 seconds and that they do not suffer. It also proves that there is a sadistic pleasure enjoyed by the killers. 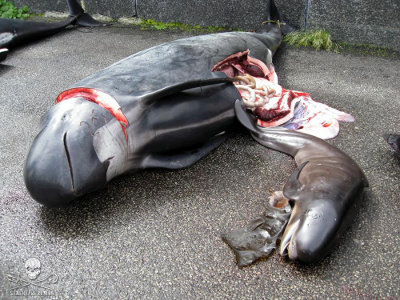 A pilot whale and her unborn calf shortly after a grind
Photo: Sea ShepherdThis arousal of a primordial urge to kill is of course a disturbing psychosis, and like all psychopaths, the killers attempt to justify their depravity by saying that they kill for food as if their subsistence depends on it, which it does not.

In doing so they actually bring shame upon their ancestors who indeed killed whales for subsistence in the days before wealth came to the islands and before regular shipments of foods from around Europe and the world arrived on their shores.

There is a difference between the need to hunt for food out of necessity and the desire to kill for the sake of killing.

A visit to any market in the Faroes demonstrates that food is readily available. There is no need to depend upon mercury-tainted meat. This is not a subsistence hunt.

Yet the psychosis of whaling is such that even the dead-certain consumption of poison in the pilot whale meat is justified, and it is a toxin that literally eats away brain tissue. Methyl-mercury is a silent killer and pregnant women and children are especially vulnerable to the consequences.

And methyl-mercury is also threatening the whales and diminishing their chances for survival.

There are very few places in the world where cetaceans are tortured and slain for reasons other than necessity. And the killing is done by a pathetically few individuals of the global human community. Not more than a few hundred humans out of seven billion are so inclined to rip open the innocent flesh of dolphins and pilot whales and to spill their hot blood into the cold sea with such enthusiasm.

When a very few of our species practice such depravity in comparison to all the rest, it must follow that this is an aberrant and abnormal psychosis.

In fact there are only a few communities in the entire world where this horrific butchery takes place on a regular basis. The Faroe Islands are one place and a few tiny villages in Japan, like Taiji are the other places.

The Faroes are becoming known as the Taiji of the Atlantic.

We need to produce a film about the grind on par with the Academy Award-winning film The Cove.

At this moment there are some 70 Sea Shepherd volunteers from around the world in the Faroes. Like the Cove Guardians in Taiji they are not there to intentionally break any laws. They are there to do whatever they can do within the boundaries of nonviolence to defend and protect the pilot whales.

The killers, of course in their predictable need to justify their psychotic behavior, accuse these selfless volunteers of being motivated by money, although they are not paid. They accuse them of being racist, as if having empathy for life is a racist motivation. They accuse them of cultural imperialism, as if being compassionate is some form of dictatorial imperative.

The world thus is populated by hominid killers, apathetic hominids and compassionate humans - or as I like to see it: homo arrogantus, homo ignoramus and homo sapiens.

A true homo sapien, that is a real human being that the world’s religions profess to aspire to, are intelligent beings of compassion who empathize with other species, who respect life, do not intentionally harm life and care for and abide by the natural laws of ecology and decency.

Killing should be abhorrent to any human being of compassion. And empathy should be the hallmark of a civilized person.

Many of the Faroese whalers consider themselves to be Christian, yet the Christian Bible specifically forbids the eating of whale meat. But if a justification cannot be found, denial is the next excuse for continuing the killing even to the blasphemous point of declaring that the “Grind” is a gift from God.

Yet it is plain from Leviticus 11:12 that it is forbidden to eat whale meat.

“Whatsoever hath no fins nor scales in the waters, that shall be an abomination unto you.”

There are ugly rumors coming from the whalers and their supporters that they intend to initiate a confrontation with Sea Shepherd volunteers. There have been many threats and some of the threats are extremely disturbing.

The Danish Navy has been doing exercises on intervening to protect the whale slaughter should Sea Shepherd choose to intervene. In many ways this will be a good thing if they do because it will illustrate Denmark’s support for something that is specifically illegal under the laws of the European Union.

The Sea Shepherd volunteers however are not being deterred and they are not to be frightened off, because they know that unless they are there, hundreds of innocent and intelligent whales and dolphins - entire families - will be massacred.

They know there is a possibility that they may have to shed blood for the whales but that is what defines a Shepherd of the Sea – the wiliness to endure threats, assault and conflict in order to stand in defense of life and for the future of diversity in our ocean realm.

All Sea Shepherd crewmembers are asked if they are prepared to risk their lives in defense of the whales. So whatever the threat, whatever the consequences, the Sea Shepherd volunteers in the Faroes will stand their ground on land and sea for our clients, our friends and our future.