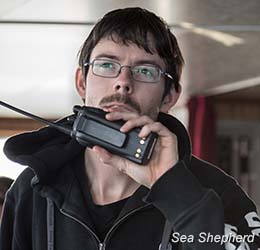 Captain Peter Hammarstedt during
the operation "Stop Refueling"
photo: Marianna BaldoAs extensive amounts of photographic and video evidence continue to be uploaded from the events of Wednesday, 20th of February, it becomes more apparent that the Institute for Cetacean Research simply cannot justify the actions of Japanese Whaling Fleet.  It is well documented and indisputable that the Nisshin Maru has rammed three Sea Shepherd ships and their own fuel tanker.  Captain of the Nisshin Maru, Tomoyuki Ogawa, risked over a hundred lives that day, and has not had to answer to anyone for his reckless actions.

ICR may say they were provoked, but a captain of an 8,000 tonne ship should be able to maintain a cool head while navigating in some of the most treacherous waters on the planet.  There is never an excuse for for endangering life, and certainly there can be nothing more grossly irresponsible than Tomoyuki Ogawa’s collision with a fuel tanker.  There is also most likely nothing more reckless than ramming your own tanker whilst throwing “flash-bang” concussion grenades in an area so easily combustible even smoking is prohibited.

Sea Shepherd has documented an oil spill by the Sun Laurel, collecting water samples as well as monitoring and recording radio communications from onboard the fuel bunkering ship. The Australian Maritime Safety Authority has opened a file on this incident and it is officially under investigation.  Sea Shepherd also has video and photographic documentation of the Sun Laurel navigating dangerously through pack ice and hitting a growler with its bow, creating risk of an oil spill.

The ICR has insisted that their refuelling operation is legal, but still will not deny that the Sun Laurel is transporting heavy fuel oil below 60 Degrees South in violation of MARPOL regulations.  In the past they have tried to argue that the Nisshin Maru is exempt from these regulations by virtue of being a “research” ship. The Sun Laurel, however, is a commercial tanker, and there is no defence to this breach of international law.

These refuelling operations are illegal to protect the pristine environment of Antarctica’s waters, because no matter how many safety measures one could take, there is always a risk of disaster that can prove deadly for entire ecosystems from minute human errors.  The blow out of the Deep Horizon and the catastrophe at Fukushima were both deemed impossible before they happened.

Because Sea Shepherd has already documented the Sun Laurel flaunting its arrogance in the face of safety: spilling oil, navigating into ice, and even smoking cigarettes on a fuel tanker; there is no faith that the Sun Laurel would conduct this illegal refuelling operation safely.  Therefore, the most ecologically responsible action is to non-violently obstruct it.

Sea Shepherd’s interference with the Nisshin Maru’s illegal and dangerous refuelling operation creates no danger to their safe navigation. They have enough fuel to leave the Antarctic Treaty Zone, where they can refuel north of Sixty Degrees. Since their ships are not in any danger of running out of fuel at this point, Sea Shepherd advises them to head north of Sixty Degrees to conduct their refuelling operations in a legal manner. It is also illegal to send the Sun Laurel, a fuel tanker, into pack ice and to conduct fueling operations in pack ice conditions. Sea Shepherd’s actions thwart an illegal operation and thus our movements are justified to non-violently block this criminal act.

There is no regulation stating that our ships cannot be positioned in such a way as to obstruct an illegal refuelling operation.  Sea Shepherd ships did not approach the whaling vessels. Sea Shepherd ships were in position near the tanker when the whaling vessels moved into the area. It is our opinion that the most responsible thing to do when poaching ships are attempting an illegal transfer of heavy fuel oil from a tanker to another ship in an icepack is to obstruct and prevent the criminal operation.

There is no way a ship’s captain can excuse ramming four ships with claims of provocation. The Nisshin Maru’s Captain Tomoyuki Ogawa knew exactly what he was doing when he struck the Sea Shepherd ships and the Sun Laurel.  He just considered his own refuelling operation worth risking the safety and lives of over one hundred of our crew, a dozen of the Sun Laurel’s crew, as well as his own crew on the Nisshin Maru.

The ICR has refused to acknowledge their damage to the Sea Shepherd ships and exaggerates the damage the Nisshin Maru sustained from ramming the vessels, which has amounted to large chips of paint that the Bob Barker crew have collected off their smashed decks and snapped masts. They have also understated the damage to the Sun Laurel that included structural damage to the superstructure, broken railings, the crushing of their primary lifeboat davit and the crumpling of the crane necessary to launch the life-rafts.

Captain Tomoyuki Ogawa of the Nisshin Maru rammed the Steve Irwin not once, but twice; the Sam Simon was rammed once and sustained damage to their A-Frame; the Sun Laurel was struck four times.  The Bob Barker did not collide with the tanker, it was pushed by the Nisshin Maru into the side of the tanker, and then rammed by the Nisshin Maru multiple times.  All of this was recorded from numerous angles by over a dozen cameras on the Sea Shepherd ships and in the Steve Irwin’s Delta inflatable. The Bob Barker was de-masted, had its radar destroyed, and her navigation lights crushed by the bow of the Nisshin Maru in addition to structural damage to her decks from the massive hull. As Captain Captain Tomoyuki Ogawa crashed the Nisshin Maru into the monkey deck, it ripped apart high-voltage electrical devices, sparking from which could have caused a major explosion of the fueling tanker Sun Laurel and continued to push into the Bob Barker after inflicting this damage and only backed off when the Bob Barker issued a distress call.

The ICR has stated that they used their water cannons as a “preventive measure.”  But it seems the Nisshin Maru was taking more of an antagonistic measure to direct their highly pressurized water cannon at the crew and into the funnel of the Bob Barker to damage the engines, in addition to tossing concussion grenades at the crew.  The Nisshin Maru at one point was directing their extremely powerful cannon at the radars of the Sam Simon for minutes on end.  Attempting to destroy a ship’s capability to navigate is not a preventive measure.  But the water cannon’s main targets on the Sam Simon were their smoke stack, which caused heavy flooding in the engine room, and the bridge windows.  The bridge crew of the Sam Simon were steering in action helmets, so great was the fear that the high-pressured water cannons would burst the bridge windows.

The references that the Japanese Whaling fleet has made to U.S. Ninth District Court Injunction are not relevant.  The defendants in that case, Sea Shepherd USA, have been in full compliance with the injunction since it was put in place in December 2012 and have had no participation in the direction of Operation Zero Tolerance in compliance with that court order.  The Sea Shepherd ships defending the Southern Ocean Whale Sanctuary fly the Australian and Dutch flags. The Captains are Swedish, Indian, and Australian. The incident took place in the Australian Antarctic Territory.

It is worthy to note that in this incident, none of the Sea Shepherd ships approached any of the Japanese vessels.

Our ships have exercised more restraint this year then ever before, which is ironic compared to the gross escalation exercised by the Japanese Whale poachers, the likes of which haven’t been seen since they tore the Ady Gil in half 2010.

The violations of the Japanese whaling fleet are seemingly endless.  The Japanese whaling operations target endangered Fin and Humpback whales and protected Minke whales inside the boundaries of the Southern Ocean Whale Sanctuary, the Australian Antarctic Territory, the Australian Whale Sanctuary, and the Antarctic Treaty Zone - in blatant violation of the International moratorium on commercial whaling. In addition they were transporting heavy fuel oil south of Sixty Degrees in violation of MARPOL regulations. The Japanese whaling operations are not scientific in any way and this excuse is simply meant to cover up their commercial operations. This is not science, it is fraud.

Sea Shepherd has operated non-violently for over 35 years of operation, and has never caused an injury to single person.  The whalers have destroyed a ship, the Ady Gil, and have caused numerous injuries to Sea Shepherd crew, last year alone striking crewmembers in the face with bamboo poles and throwing a grappling hook into the Delta inflatable that struck several crewmembers and hooked the arm of a cameraman, nearly pulling him into the freezing Antarctic waters.

While the Japanese whale poachers are terrorizing the Antarctic eco-system and the whales, Sea Shepherd has no intention of issuing some juvenile label like “terrorist”. This word is used far to liberally these days to the point where it is rapidly becoming meaningless rhetoric. Sea Shepherd will refer to the whalers for what they really are, poachers committing crimes in an internationally established whale sanctuary. 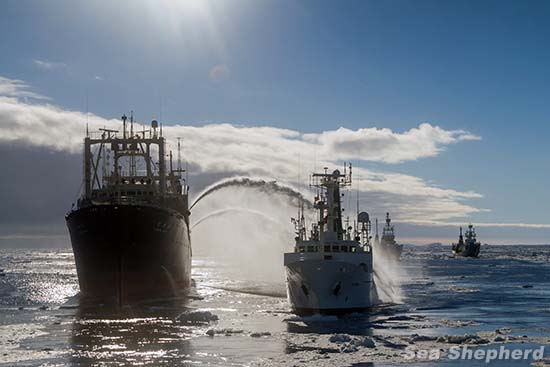 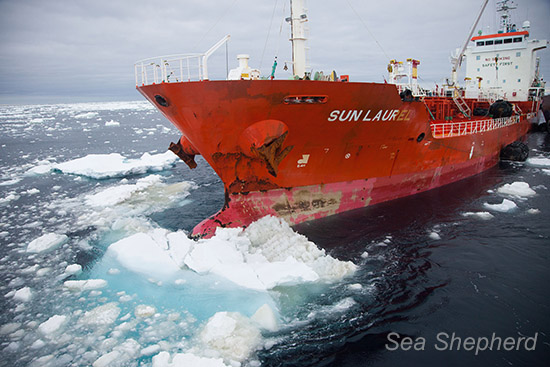 Despite not being an ice-class vessel, the Sun Laurel navigates in ice pack, striking a growler,
creating the potential hazard of a massive oil spill  photo: Tim Watters 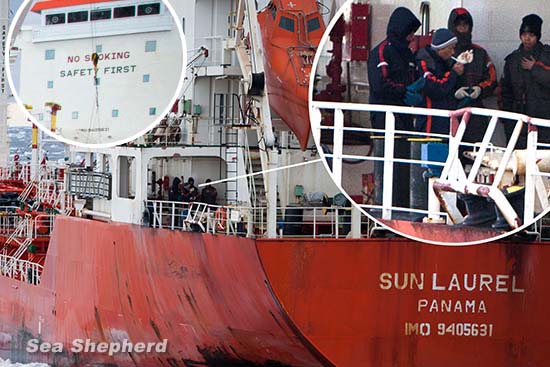 Crewmembers of the Sun Laurel smoking onboard the fuel tanker  photo: Tim Watters