On Being Relentless - Update from the Southern Ocean Whale Sanctuary 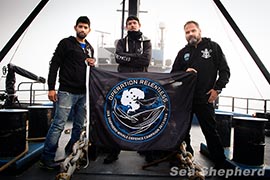 To sum up the first leg of the campaign, the whaling fleet was first located in the Southern Ocean Whale Sanctuary on the 5th of January, when The Steve Irwin's helicopter filmed four threatened and protected Minke Whales, butchered on the flensing deck of the floating abattoir Nisshin Maru. Based on when the whaling fleet departed Japan, there would have been few days of whaling prior to being found.

For three days, the Sea Shepherd Fleet pursued the Nisshin Maru, chasing them out of their self-allocated whaling grounds, when they were escorted north of 60° South. Unfortunately, the only downside to finding the whale poachers at the beginning of the whaling season is that the amount of fuel carried by the Sea Shepherd ships, which ensure their endurance at sea, also limits their maximum speed. After three days, the Nisshin Maru was lost from visual, but it would take them another two days to get back to the ice where they could resume whaling, had the weather permitted.

Both The Steve Irwin and The Bob Barker were left with whaling ships tailing them, that would report on the Sea Shepherd Fleet’s positions, thereby allowing the Nisshin Maru to stay just out of reach. The Bob Barker immediately ran for Macquarie Island and the border of the Australian Whale Sanctuary, where the poachers don’t dare to enter, and where they would risk legal repercussions for operating in violation of the 2008 Australian Federal Court Order. Thus, the refuge for the whales also strengthens the effectiveness of the only law enforcers offering them protection - Sea Shepherd. At the 200 nautical mile limit of Macquarie Island, marking the Exclusive Economic Zone of Australia, the Yushin Maru No. 3, the harpoon ship that was harassing The Bob Barker, broke away, leaving The Bob Barker free to resume the search for the Nisshin Maru. In the meanwhile, The Steve Irwin and The Sam Simon kept the rest of whaling fleet on the run, and while the poachers were running from the Sea Shepherd ships, there would have been limited opportunity to kill whales.

On the 24th of January, The Bob Barker and The Sam Simon, in search formation, stumbled upon whale offal and followed a trail of whale guts straight to the whaling fleet's factory ship. For the week previous, more bad weather would have made whaling difficult if not impossible. While the Sea Shepherd ships had the factory ship out of visual range, the Southern Ocean pounded the whaling fleet with low-pressure systems, one after another, a veritable runaway freight train of wind churning up the ocean and whipping up sea, shepherding the whales until the Sea Shepherd Fleet could take over the job as sole protector.

Upon finding the Nisshin Maru for the second time, The Steve Irwin and The Bob Barker kept them on the run for ten days. Not a single whale was killed during this time as the Sea Shepherd ships stood guard at the slipway.

On the 2nd of February, after having lost more than three-quarters of the month of January to either Sea Shepherd or the divine wind that kept kills to a minimum, the three harpoon ships belonging to the whaling fleet attacked. In a desperate move, the three harpoon ships repeatedly crossed the bows of The Steve Irwin and The Bob Barker, forty-five and forty-one times respectively, aiming to damage propeller and rudder by trailing 300 meters of steel cable. On one such pass, the stern of the Yushin Maru No. 3 collided with the bow of The Bob Barker, almost taking off our anchor. Every dangerous pass allowed the Nisshin Maru to gain a bit of ground. The sea state, with a wave height of two to three meters, was chosen specifically for the attack to limit what the Sea Shepherd small boats could do to prevent the onslaught. 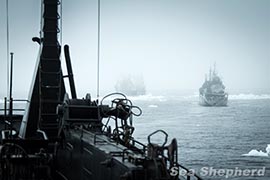 The Steve Irwin and The Bob Barker guard the slipway of the Nisshin Maru  Photo: Simon AgerHowever, losing the whaling fleet was not the worst thing that could have happened. The Sea Shepherd Fleet was due to refuel to last the entire whaling season, and fortunately, The Bob Barker was only four days away from Macquarie Island, and the Steve Irwin only five days away from New Zealand. As The Steve Irwin entered New Zealand waters, the Shonan Maru No. 2, the whaler's security ship, pursued despite an official request from the NZ government, sparking a diplomatic row between New Zealand and Japan. Once again, the Yushin Maru No. 3 turned away at the limit of Australia's Exclusive Economic Zone. The Sam Simon refuelled in Dunedin, New Zealand as well, and with the support of our hard-working onshore volunteers, were out at sea again in less than 20 hours.

All three Sea Shepherd ships are now ready and in pursuit of the Nisshin Maru once again. It's a massive area to search, but I'm confident that we'll find them for the third and final time. In the meanwhile, as the media reports on some ships getting stuck in the ice and others running aground, the weather in the Antarctic continues on a record bad streak, making whaling more difficult than it is for us to find the whalers.

This was always going to be the campaign where the whalers would try and outrun the Sea Shepherd Fleet at every opportunity, even if they would have to undertake ruthless and unprovoked attacks to do so.

When Captain Ogawa, the Master of the Nisshin Maru was asked during a court deposition whether or not he believed anything would stop Sea Shepherd's campaigns in the Antarctic, he simply answered, “No.” When he was asked to explain why, he curtly offered – “because they never retreat.” That's why, since the 3rd of February, not a day has passed by without Captain Ogawa looking over his shoulder. He knows that we're inbound and he knows that it doesn't matter if we get knocked back; we're always coming for him.

Never before has Sea Shepherd faced such aggression from the whale poachers. We are facing a desperate opponent in the whaling industry this year because it is an adversary that is losing the whale war.

Last year was the campaign where we fought the whalers by blocking their fuel supply, the refueling tanker Sun Laurel.

This is the year where we are going to have to fight by blocking the slipway of the Nisshin Maru.

We've found the whaling fleet twice. And we've lost them twice. I am confident that when we find them the third time, we will deliver the final blow to the whaling fleet that will knock them into one of the worst seasons of slaughter that they've had to date.

We will get back onto that slipway because it is where every Sea Shepherd ship in the Southern Ocean belongs. And when we do, we will remind the whalers exactly what it means to be relentless.

The Steve Irwin surrounded by the 3 harpoon vessels during a 9-hour attack on
the Sea Shepherd ships  Photo: Marianna Baldo